☰
Home > Ironman Training > And Then What?

If you’ve read my About Me page (much in need of updating) you’ll have read ‘I aim to improve my times in Ironman triathlons with a goal of reaching Hawaii’. Well I’m going to Hawaii. I’ve completed the goal. Which is why when I first got asked what my aim for Kona was it dawned on me I didn’t have a clue! I really hadn’t thought about actually racing there despite al the work to get a slot.

Well it seems a little silly! Answering that I want a solid race or to gain experience of racing there don’t seem good enough. After all I always want to have a solid race. At first I really had no idea what to aim for. It’s all new territory after all. Or is it?

I’ve happily made predictions or set rough time goals for races where I’d no idea or experience of the course. Search back to the end of last year and I was boldly aiming at a 9:30 in Bolton ‘course allowing’! With no knowledge of the course or prior results to consider unsurprisingly I was a little off with my estimations. Kona comes with a long history of results over a well established course. With data to back me up I should be far more willing to pull a figure out the hat! Not only that it’s an opportunity for a graph… 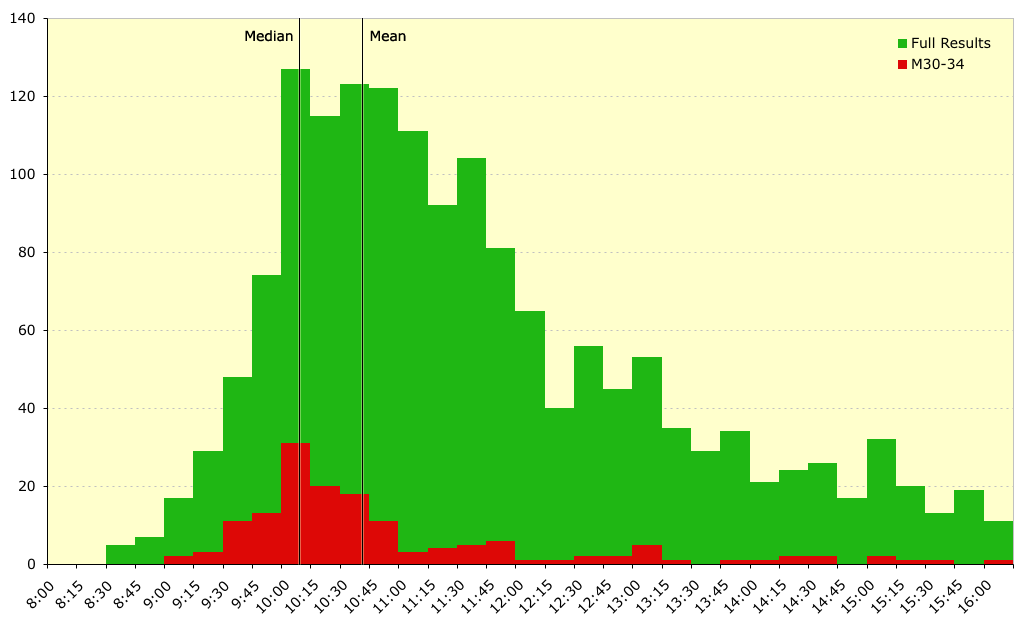 If I’m entirely honest that was just an excuse to play about with numbers in Excel again. As I started to look at the data I realised it doesn’t really give me much more to work with. At least not on its own and without a lot more work. So for now a quick chart and a couple of top line numbers. What the graph does demonstrate is that the bulk of people come in between 10 and 12 hours. For my age group you can tighten that down to 10 to 11 hours. Actually for male 30 to 34 it really goes from 9:30 to 11:00.

I’ve marked two lines on the chart – the median and mean finish times in my age group. Originally I calculated the mean as the quick and obvious thing to look at, but I think it’s too skewed by the slower finishers which whilst rare are way out there. If you’re keen for exact numbers the mean finish time for male 30-34 year olds in Kona last year was 10:42:48 and the median was 10:10:31.

Realising how liitle this really helps me I did start to think about better ways to analyse this. Firstly perhaps comparing the distribution of finish times across the range of races I’ve done. This would at least allow me to establish if Ironman race results tend to follow a similar distribution pattern. Comparing the distribution pattern of results (not the actual finish times) would eliminate the effect of variation in courses and conditions to an extent. So if the distribution of finisher times tends to be consistent across races then I could pick a finish goal based on a percentile in my age group.

That’s a lot of work! So another alternative I considered was looking at my finish times relative to female pros then trying to use those figures as a guideline to a Kona finish time. It took about 5 minutes of working along those lines to realise that was also far more effort than I wanted to put in! Also the field and the nature of a World Champs would lead me to suspect a lot of athletes are either performing at their best or blowing up spectacularly. I’m far from convinced that comparing the time difference from other races would count for much anyway.

Where this all leads me is that if there is some sound statistical route to predict a race result it’s far more work than I’m willing to put in. However I also know I’ve been willing to spuriously predict times in the past and I don’t see why I should stop. So, here’s the goal – sub-10!

Yep, that simple. I’ll aim to break the 10 hour mark in Kona. It’ll be better than average for my age group at the very least and I think I should be able to pull that off. Whilst I’ve no experience of the specific conditions in Kona I like heat and have raced well in winds. I don’t see why Kona should be so different to any other race. I execute a typical race plan and breaking 10 hours shouldn’t be a problem! I’ll let you know my opinion on October 11th!

And Then What? Part II

You may have noticed things have been quiet round here the past week. My final recovery week before the Kona build has been busy. It all relates to my longer term plans. A year has shown me I love training and racing a lot. Which gives me a longer term aim of finding a way that sustains this lifestyle. The goal is to establish a coaching business and develop and grow it to a point where I can keep training and racing like this. If I can avoid working in an office or commuting, that’d be perfect.

To start myself along this road I ironically spent my week getting up early and commuting into London. Then spending all day sat studying. I’ve now completed my ASA/UKCC Swim Coaching Level 1 Course and my UKA Level 1 Assistant Coach Course. I would have fitted in the BTA Level 1 this month too, but unfortunately the course I wanted was cancelled. That’ll be next year.

To an extent the qualifications are formalities. I’m sure we’ve all seen there’s plenty of coaches out there with a real mix of standards and qualifications. The real challenge will be establishing a reputation and client base. After all I’ve looked at coaches online and know how easy it is to be sceptical about their capabilities. No slur to the many great coaches out there, but if you look online it’s hard to be sure what you’ll be getting. Outside of my own training my ability to coach is an unknown entity to most.

For now though the focus is on Kona. I have a five week build period ahead of me followed by a two week taper. Big plans for the period, plenty of hard work. Partly why I’ve allowed myself such a lot of rest. It was time to allow myself some proper recovery before the next push. Back to normal service next week and probably a lot less stats as my time is filled.