Time for some data analysis from the Ironman World Champs! Having lost two days to travel there’s nothing else to blog about right now. So instead a look at some run and bike data. I’m pleased to say I’ve mile splits for the run this time so some kind of pacing record for once. For the bike I only really have speed, heart rate and altitude to work with. 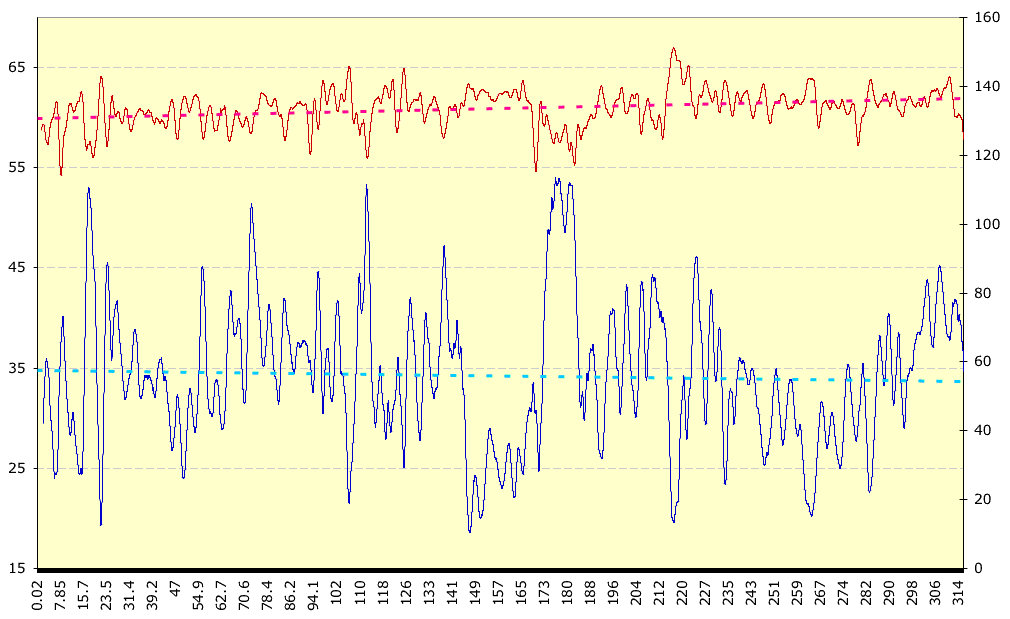 Two pieces of data plotted against time. In red with values on the right hand axis is my heart rate and in blue with values on the left is my speed. There’s two lines for each a moving average trend line and a linear trend line. The former gives a slightly smoothed view of the changes throughout the race, whilst the latter gives some kind of overall trend.

Assuming you read the original race report than you’ll know I felt strong around the top of Hawi and felt I rode the second half of the course more strongly than the first. The top of Hawi comes somewhere around the 170-180 minute mark. When you see that big blue spike a bit over halfway along that’s descending back down! Yes it was a lot of fun.

From what the data shows there was a slight increase in my heart rate over the course of the ride. Pleasingly it isn’t particularly big and I suspect largely a consequence of me working harder in the second half. When I say I felt stronger, that may correspond to being able to work at a slightly increased heart rate.

It’s worth noting my average heart rate for this ride was 134, higher than Roth and I think Ironman UK. One factor may be the higher temperature, though with 14 days on the island by race day I think I was acclimatised. If I take the average heart rate for the first half and second half of the ride then there is a jump up from around 132 to 136. Confirming that I was working slightly harder on the return journey.

It feels a little chicken and egg in nature. Did I feel stronger because I was working at a higher heart rate, or was I working at a higher heart rate because I felt stronger? I’m not sure what the limiter was. I know on the return with a headwind and the undulations I felt I had something more to work against. Perhaps that’s all it was, the conditions suited my riding more.

If I take anything from this it’s that I want to work on starting out my rides stronger. I think I take too long for my legs to come round and one cause might be the way I tend to ride. Perhaps by not starting out so easily on rides I will get myself used to working a bit harder from the go. I’m not sure, but it seems worth a shot. I’ve experienced rides before, usually with others, where the initial pace is higher than I’d opt for, but I stick with it and soon settle in. Maybe when racing I can start going slightly harder and settle into a slightly harder pace. Worth a shot at least.

For the first time ever, I’ve both successfully recorded my splits during the race and copied them to a spreadsheet later. Which leaves me able to plot my pace against the profile of the course. 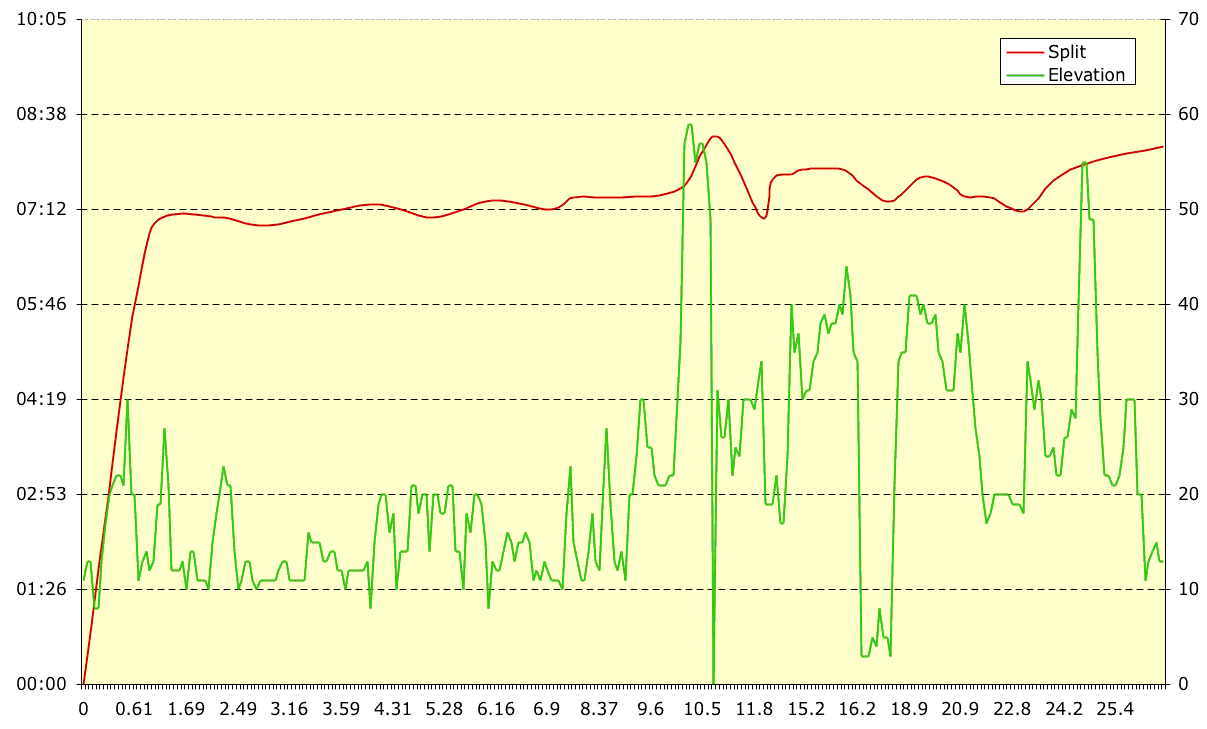 This time the run pace, or mile splits are in red with the left axis for values. The elevation is given in green with the right axis for values. When looking at the pace line remember I only took mile splits so it’s simply interpolation between the miles. One of the reasons I’ve added on the profile is so you can see how a slower mile pace often corresponds with the presence of a climb.

I’d actually go so far as to say that my pacing was pretty even throughout and most variability can be traced back to the terrain. Sure the first half is faster, but Ali’i Drive is much easier terrain. You can see how smal the undulations are. At about the ten mile mark we had to run up Palani Road to the Queen K. It’s the big climb and unsurprisingly the result is my slowest mile.

The later dip and climb around mile seventeen corresponds with the Energy Lab. From that point on I was trying to work harder and I think that accounts for a gradual improvement in mile pace after mile twenty. Well at least till the final inclines before descending on Palani again. It’s worth noting the apparent slow pace of the final mile comes down to the fact the split is for 1.2 miles. If you look on the athlete tracker my final mile was apparently a 6:20. I definitely sped up in that final mile.

Given the conditions on the day I’m hoping this means I should always be able to go faster than this in cooler conditions. I clearly felt I was suffering on the run, but not the usual way. It’s hard to describe really, it was just draining. Not muscle fatigue as such, but everything became increasingly hard work. Take out the heat and the humidity and I don’t see why I can’t hold closer to my early pace.

My running goal for the next year is to make progress towards a 3 hour run. I’m aiming to go under 3:10 in Western Australia. The run course there is pan flat and three laps. No terrain features to slow me down and the laps should help with pacing. One of the objectives in terms of improving my run time is to work at being able to push sooner. So rather than the last 10km I’m going for the final lap, a little over 14km.

Those are the Performance Management Chart tables for the Hawaii taper. If you compare with the plan you’ll notice I actually hit pretty close to all my numbers. I’m pleased with that and base on results it seems to have worked. On the other hand I played about with the workout schedule quite a lot in the final week. I dropped a lot of runs and did slightly longer, harder sessions when I did (thanks to Roger!)

My feeling during the final week was that my legs really didn’t feel good until the last day or so. Right at the last minute that started to feel like they were in race shape. Pretty late in the day and how much that contributed to the soreness early in the bike I’m not sure.

I think my run TSB values were too low. Given how tired I felt early in the run that’s what I’m blaming! Clearly not so low as to be a problem, but I would have liked to have that a little higher. I never managed to work out a way to achieve it though, at least not without stopping running and heavily dropping run CTL. Ten seems to be the best compromise I could manage.

If this wasn’t already so long I’d post my final taper schedule so you could also see how that varied. Mostly changes were minor. It really did come down to dropping the number of runs because my legs felt so bad. Biking tended to be shorter than planned, largely because every ride I did had far higher TSS than estimated! Basically the final week was really slack.

The conclusion I’m taking forward is a two week taper period is fine, with quite a heavy first week (26 hours in the case of Hawaii) and a very big reduction in the final week. Essentially ramping down day-on-day. I’ll be planning the Western Oz taper along these lines with an aim for a little more rest on the run.

Enough analysis. I’m enjoying some relaxing time in Sydney before I head to Perth. There I’ll be hoping that maybe my body will start to return to normal and I might be able to race. Sunday isn’t looking a whole lot of fun yet!