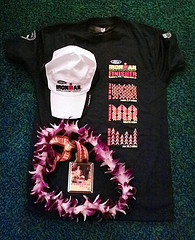 It was a tough day out there which is exactly what I expected. There’s a lot of positives from the race despite some of the problems I faced. I got the medal and T-Shirt and can tick off my second Kona. I’m keen to come back again to set the record straight.

The swim went reasonable well with a 1:06, 3 minutes better than last year without the aid of swimskins. There’s an element of pot luck with the swim in Kona. I managed to pick a spot that seemed to avoid the worst of the melee at the start. There’s a draft the whole way round and whilst I never felt I really pushed I got round efficiently.

The bike starts with everyone hammering away and going flying by. Until I was out on the Queen K I seemed to be constantly overtaken. On the highway I was in time trial mode and went flying by people the whole day. There was the odd person who overtook me, but on the return to Kailua-Kona I made up lots of ground.

I was really pleased to go under 5:05 a big change on last year though I suspect the headwinds on the return were a little lighter. That said I know I was working at a higher heart rate all day. Whether that was too hard is another question of course.

The run started well and continued that way all the way to the top of Palani. Then along the Queen K I started to slow and by the bottom of the Energy Lab I was beginning to weave on the road. My legs were in agony. Having not run more than an hour in any given week for two months I kind of expected this.

Oddly it wasn’t the calf that hurt, but the hip flexors and adductors. As I feared the run specific muscles were giving in. I walked the next couple of miles enjoying a pack of M&Ms I’m glad I put in my special needs bag. First time I’ve used one and it helped me through a low patch.

I’d promised to run at the top of the Queen K so set off as best I could. Never able to go faster than a 8 minute mile and having to walk aid stations. It was a nasty slog home and a very clear demonstration of how much is lost once you have to walk. Much as the leg pain was one issue I suspect I’d under nourished on the run.

I pushed as hard as I could for the final mile, but despite best efforts missed going under 10 hours this time. Still that’s two reasonable Kona performances. My swim and bike have progressed and I knew there were run issues to face. I’m optimistic that I can improve off this and once I’ve got some run training under my belt put the whole package together.

Right off for ice cream.