Another weekend, another World Championship race! This time the ITU Long Distance Triathlon World Champs held in Perth. The race is O2 distance so a 3km swim, a flat 80km bike and then a flat 20km run. With Kona only two weeks ago I’m glad it’s no longer. Frankly that’s going to be enough of a struggle!

Flying back round the world and changing near enough as many timezones as I can has taken it’s toll on training. Not quite on zero hours, but pretty close. I have to hope that a couple of spins on the bike, a few trips to the pool and as of yet no running is enough prep. Fortunately I’m starting to feel quite good. It’s about the right timeframe, but whether that makes me ready to smack myself around is another question. 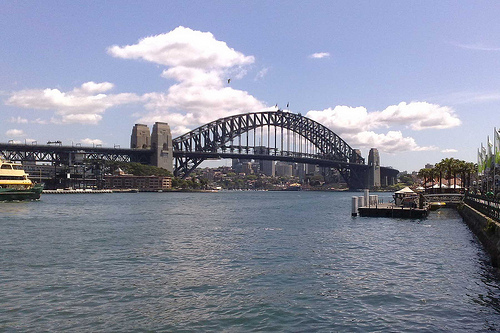 I’ve settled back into the Aussie lifestyle after a couple of days in Sydney and a few in Perth. Every time I visit Sydney it grows on me a little. I’d not want to live there it looks too much of a nightmare for bike training, but it’s fun to visit. My time is spent trawling my favourite coffee shops or hunting out new ones. I’ve come away with three I’d recommend for the coffee and a couple of places for the cakes. Cakes were still on the menu. Totally non-Paleo I know, but I had a certain cafe’s cheesecake to consume once more before I could switch back! It was worth it, I saved it as my last carb loaded food.

Something I’ve noticed more this visit is how much temptation there is here to stray from the diet. It was easy to be Paleo in Hawaii and it’s easy back in the UK. When I go out here though temptation is everywhere! Cafes are full of delicious looking cakes… Massive, dense muffins… Cheesecake… The list goes on and it’s all right there by the counter. So far my will power has been strong though and I’ve steered clear!

I’ve not just spent my time cataloging the prime coffee spots of Australia’s cities. Though if anyone is interested I do have recommendations for both Sydney and Perth. I made sure I visited one of my favourite Sydney pools – the North Sydney Olympic Pool. Fifty metres, outdoor and right at he base of the harbour bridge. It’s a pleasure to swim in with such a fantastic location. As with so many pools here go during the daytime and you’ve a lane all to yourself too. That was my total training for my time in Sydney!

It wasn’t till I arrived here in Perth that I rode my bike since Kona. I took a quick spin along the beaches up to the northern suburbs. I was quickly reminded of Aussie drivers and spent a lot of the early part on a bike path. The Perth highways aren’t a great option for cyclists as there’s plenty of traffic to deal with. 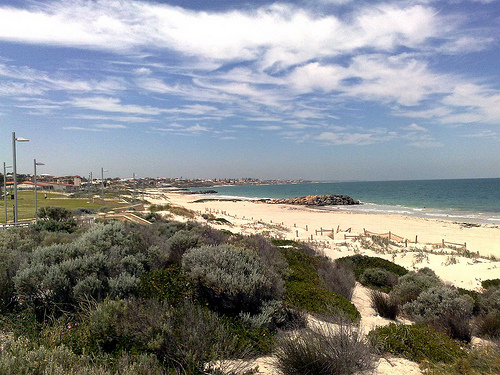 Past the highway and onto the Scenic Drive route things quiten out. You can get back on the road and pick up speed. The views are fantastic. I’ll be honest and rate the Gold Coast beaches higher, but these are still pretty fine. I just followed the coastline north until I ended up at a dead-end in a recently built housing estate. I figured it was as good a turning point as any so headed back to base.

On route I popped into the local bike store, Blazing Saddles. It’s a small place, but very helpful. I’ve since been back and borrowed tools to fit my new wheel covers onto my Powertap. The guy who runs it is very friendly, though some of his stories are a little tall! I can’t complain he let me use the tools and take up his workshop for twenty minutes for free! Don’t think I’d get that from the bigger shops in the city.

I spent Friday running around on pointless errands. First up the essential team meeting in the morning. My original plan had been not to come in till the evening’s Opening Ceremony, but then this meeting was announced. I managed to make the trip worthwhile stopping off at Beatty Park pool for a swim. Nothing impressive mind you, but the arms work! A long walk in from there took me past a very nice, high-end bike shop. I dived in for a few accessories I needed and got a reminder of why you buy this stuff before you come to Oz. The prices for bike kit here are extortionate.

The meeting itself didn’t tell me anything new which was frustrating. I got back home as soon as I could and relaxed. Returning in the evening for the Opening Ceremony I was optimistic that at least I’d be well fed. Didn’t happen! The event started late and the dragged on with welcome speeches before getting to the food. It was severely under catered for the numbers and when I checked Paleo man was going to go hungry. I went home for chicken salad instead! I am back to being fuelled by chicken by the way!

So it’s my final day before race day and I’ve not too much to do, with luck I’ll be finished by the afternoon and able to chill. You might have noticed that I’ve not posted lots of pre-race plans and analysis. I think the take away message of that is this race just isn’t that important to me. Don’t take that the wrong way, I want to perform well, but I’m also aware of the potential limiters on that performance. Had Kona not gone so well I think I’d be more motivated to be in race shape, but as it is I’m looking forward to Ironman Western Australia more.

If I’ve any goal for Sunday it’s to race my best on the day. Really vague and wishy-washy I know! I’m aware that my body may not be up to it’s fastest yet. It’s only just getting used to moving again. If I look at the numbers in my Performance Manager Chart then I’m in no shape for a great race. That TSB is way too high! Still we’ll see. Mentally I’m actually fired up to race well. Post-Kona confidence has left me with an attitude that I can be right at the front of these race. I find myself thinking about my age group podium at Ironman Western Australia quite a lot!

So no time goals, no cunning plans, simply go out there and see what happens when I push. Hopefully something good! The main priority though will be to avoid injury or anything that might delay me getting into Busselton training. There’s a four week build due once this is done and I have ambitious goals!

Life as an athlete

A Day in the Life of an Athlete