Further Mishaps on the Road to Kona

A week since my last report on progress towards Ironman Hawaii when I finished with optimism for the remaining four training weeks. Now with one of those done was the optimism justified?

It started well most significantly I went for my first pain and injury free run on Tuesday managing seven kilometres. Four weeks of run training with the last few month’s background could still see me racing well. Definite cause for optimism.

Out for a hilly ride Thursday morning I felt strong and able to push the pace. With sunny weather it was a perfect morning’s ride and I returned home feeling on track. Power data confirmed I’d spent most of the time at Ironman intensity and it felt easy! More optimism.

That afternoon I went for my second run of the week. Everything felt good and shortly I was past the 3K loop turn point. Somewhere in the next few kilometres the calf tightened. I eased up and followed the route home. Seven kilometres done and with it the return of the pain in my left leg. Optimism evaporated!

Since then I’ve had time to think and received helpful comments from friends. It’s too soon to write off Kona though my expectations are downgraded. Suggestions were made I could stay home and save money, but I’m committed and will race the best I can. Something about the experience is irresistible.

A fantastic interview with Chris Thompson on the Marathon Talk podcast really helped crystallise things. He spoke of his injury issues and the long term approach required to recover and then perform better. My own injury is nothing in comparison, but that long term thinking is needed.

Long term I’m looking at significantly stepping up my Ironman performance taking me to Hawaii in shape to chase another goal – an age group podium. A dream now, but perhaps a reality with the long term approach. They’ll be other Konas to come and I’ll be better prepared. This time I’ll race hard and enjoy the experience.

My training can focus on swim and bike where there are no problems. Running needs to be approached cautiously thinking of recovery not performance on the Queen K. Whatever happens in October I want to be able to run when I start training for the next year. I will be in great shape in Hawaii just not perfect shape.

There are still issues to deal with. It’s hard to be motivated when the goal seems to be slipping from your grasp. I have to focus on what needs to be done avoiding overly ambitious training sessions. Forget hours or distance and look at the essentials. What are my limiters and how do I improve them?

Swimming could almost be called a limiter in itself. Three weeks isn’t going to make a radical difference, but there’s opportunity to ensure I’m performing my best. I’ve considered the regime behind my best swim performance before. Peak performances came from periods of consistent, high volume swimming.

Importantly within those weeks were a good mix of technique, strength, endurance and speed work. In other words it’s an unremarkable, balanced program of training focussed on swimming. Some of the free run hours need to be put into the pool.

Cycling doesn’t need endurance work the year’s been loaded with big rides. I’m not limited by my capacity to cycle for a long time, but need to work on sustaining race pace. It’s about knowing exactly what I can do and being confident in my ability to execute that plan.

Threshold sessions are becoming part of the routine as I work to develop more power. Every ride has significant chunks of race pace intensity. There’s still one long bike each week, but always built around large portions of hard riding. The regular intensity of my cycling has notably increased in the past few months.

If I’m able to run the rule will be stick to a genuinely easy pace (that’s less than 12kph) for no more than 15 minutes. Better to regularly run 15 minutes than sometimes run thirty and require days of rest. The only other run related training is time spent on gym work, massage and stretching to help alleviate the problem.

Whilst I talk about focussing on the work not the hours a lack of running frees time for swimming and biking. Combined with increased intensity it places more importance on recovery and nutrition. Despite covering this last week I still failed to fully appreciate this.

If I repeat old habits I shouldn’t be surprised to get old results. Hopefully letting go of Kona will help me adapt my mindset and appreciate the important aspects of the coming weeks. With motivation dipping low it’s not an easy time to do it, but then nobody said this would be easy!

Again I’ll finish optimistically. Nerves and doubts are inevitable as a race approaches. I frequently end up searching training data for signs that my concerns are unfounded. Look hard enough and you’re bound to find something and this time was no exception.

Comparing the last few week’s training to the same period last year I’m consistently averaging higher mean maximal powers (best powers for given durations). My rides are tougher than before. Comparing with New Zealand or Lanzarote I’m not at my year’s best. That time off for a run focus set me back a little, but I’ve three weeks to hit those numbers.

Five weeks out and I’m riddled with doubts. Who knows how it will go? I can find evidence that I’m fit so perhaps it’s just I won’t be in the shape I hoped for. In the end I need to keep perspective and make the most of the opportunity I have. Whatever else I’m going to Kona after all. 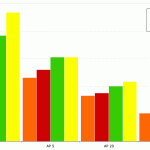 A little Optimism on the Road to Kona

Final Preparations on the Road to Kona

The (Rough) Road to Kona Update