☰
Home > Ironman Training > A little Optimism on the Road to Kona

A little Optimism on the Road to Kona

I’ve posted downbeat Kona training updates for two weekends focussing on lack of running or lack of motivation. I don’t want to seem overly negative though and after that rough period things have picked up. I can’t say much more about my running, but swimming and biking have taken off.

Last year in Busselton I found less running unsurprisingly allowed for better cycle training. I unintentionally find myself back in that situation, unable to adequately run, but pushing the bike more than usual. Similarly I’m logging high quality pool time each morning and really enjoying the sessions.

I’d had concerns that my run focus had allowed cycling to slip back a little. I had the endurance and I’d been on some tough rides, but I’d not seen the sort of power that marked my builds for New Zealand or Lanzarote this year. Given both had good bike performances I hoped to match that training.

Not being able to take the benefits I’d accrued during my run block and not performing on the bike was depressing. The last week turned things round with renewed motivation and determination to eek what performance gains I could. I hit bike sessions hard and the effort was rewarded.

Partly inspiring my posts on Analytical Triathlon Training I started to dig through my data. It’s a place I go during the darker, less certain moments of race preparation. Searching for patterns indicating potential performance relative to previous events. I’ve tried a number of approaches before, considering Critical Power curves, Kilojoules or TSS per hour amongst others. 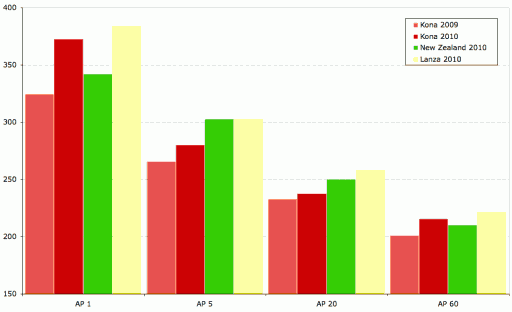 I decided to look at mean maximal powers over 1, 5, 20 and 60 minutes for the eight weeks leading into recent races. In other words for each of those weeks I found the average (and normalised) wattages I’d held for those periods of time. From my perspective the 60 minute value is probably the most critical indicating far more about my potential to perform over long distance.

When I produced the charts at the start of the week I was pleased to see that relative to Kona 2009 my average wattages for the eight week period were higher (and I’m only halfway through). I was also disappointed to find a gap between recent performance and the weeks prior to Lanza or Taupo. I was stronger than before Hawaii last year, but not as strong as before my Ironman races this year.

Having pushed the pace throughout the week when I updated the data this afternoon Kona 2010 suddenly looked more like New Zealand 2010 especially the 60 minute power. Perhaps my concerns were all unfounded and the supposed loss of bike fitness imagined? Perhaps this highlights the issue with looking at training data to judge performance.

The Difficulties with Training Data

When I stated the importance of benchmarking fitness earlier this week it was based on the knowledge that in isolation training sessions tell you little about your race performance. Workouts vary in purpose and intensity pick the right one and you’re flying, but pick the wrong one and you’re going backwards.

Taking whole weeks can eliminate this to an extent, but even that’s limited. Consider the values from Lanzarote, part of the reason they’re higher is I was riding harder due to conditions (wind and hills). It’s easier to rack up high 20 or 60 minute powers when the terrain is against you.

A single week in the Pyrenees during the build to Kona 2009 contributed all the highest maximal power values for that period. Again the nature of the training environment along with a bike focus enabled me to work harder. Outside of that week performance was notably lower. It’s like tracking your weight the values of an individual day (or week) aren’t important it’s the overall trend.

The trend I wanted to see now was comparable bike fitness to previous races. I’m some way towards that goal with only three watts more to a 60 minute best power (currently set during Epic Camp in January). Given the recent lack of bike focus it’s gratifying that I’m still in good shape. Having these numbers also motivates me to push in the coming week’s threshold and tempo sessions.

I’ve adopted a routine built around a simple 3:1 training cycle. Three days are hard with each day having a different focus then the fourth is easy. This seems to balance well for me and make progress more manageable. I can also place my workouts to perform them to the best of my ability.

It’s not 100% fool proof, I’ve already made a couple of mistakes. Following a hard tempo ride with an endurance ride proved tougher than expected (possibly aided by inadequate fuelling). I was left too tired on Saturday to execute my second threshold bike session of the week and instead had a very light spin. With overall bike performance improving it makes sense to listen to your body.

Having had an easy cycling weekend I know I can hit the next block of workouts harder and the potential to beat those wattages tomorrow is spurring me on. I’ve planned the route to take me onto prime Time Trialling sections of the A4 just to help. Hammering out a hard hour there should enable me to set some new annual PBs!

I’ll stick to a routine of tough four or five kilometre swim sets each weekday morning. Having grown used to the quirks and characters of my local pool I can now make good use of the facilities. Another couple of big weeks of swim training should see me in my best swim shape for a while. Hopefully that’ll show once I’m practicing off the shore of Dig Me beach.

A Tiny Piece of Run Optimism

Carrying the optimistic theme forwards I’m slowly returning to some semblance of running. It may take the form of 15 minutes at a very easy pace, but something is happening. I’m focussed on form and economy and not worrying about pace. Trusting in the endurance I’ve built before to get me through and simply getting the legs running once more.

Whether that’s enough to get me through a marathon is another questions, but it’s what I can do. It’s time to keep positive and focus on what can be put in place for race day not what’ll be absent. Back in March a long five week break did little to harm my bike performance (or run for that matter) I hope the same proves true now.