The (Rough) Road to Kona Update

Perhaps you’ve noticed I’ve not reported on the state of my Kona preparation in a while. The last three weeks haven’t been going to plan. With six weeks left to the big day I’m increasingly anxious. This post is part cathartic exercise to get past the issues and part lesson in the skewed perspectives of endurance athletes.

It begins with a successful ITU Long Distance Worlds. A mediocre swim, reasonable bike, but notably strong run gave me the race I wanted. Everything on track and my run was an asset again. I’d ambitious plans for the following eight weeks before I’d taper for Kona. Then I hit the first bump in the road.

The little niggle in my calf was now an issue and run training was out. Even walking was painful if anything more so than running. The only approach was stop running and hope that with work it would heal. Three weeks later and there were still problems, but my suspicions moved from calf to hamstring. 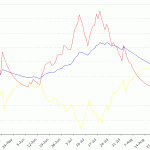 I’ve sat watching fitness I worked so hard to build dwindle. All that run training and then a huge break! The plan was to be pushing further than before. Instead I spent each evening using stretch cords and a roller to iron the problem out. Once again I’m optimistic as the calf feels much better, but an easy run tomorrow morning will answer that.

The big question is how much fitness I’ve lost? My concerns are based on the Performance Management Chart in Training Peaks WKO+. A blue line represents fitness (Chronic Training Load) in terms of the training load over the past few weeks. A few weeks ago it towered above previous heights, but now drops daily.

How much can a graph tell me about performance? With fitness at an all time high I had a superb race in Immenstadt, but I’ve seen great biking after a long break and drop in bike fitness. From big fitness gains earlier in the year the charts may drop, but performance seems to last.

I’ve four weeks left to work on the run and I’m allowing myself a little optimism. Sub 3:05 may still be possible it’s not time to give up yet. Rereading the Journey of Justin Daerr helped reassure me the possibility remains. I just hope for pain free running in the next week!

Run fitness may trend down, but for the bike it remains stationary. The graph stubbornly refuses to rise without consistent days of hard bike work. Every week there’s been hard days of work, but not tightly scheduled to push the numbers up.

Each session is harder than last year’s equivalent. I’ve the ability to work at higher power levels, but that blue line says it’s not good enough. The key must be performance if I’m working harder and the raw power numbers are up then I’m moving in the right direction.

Friday’s terrible turbo didn’t help my anxiety. Just as I get used to indoor cycling again (I was amazed how much I did in my old training diaries) I have a nightmare session. A classic threshold set of twice twenty minutes at threshold.

It was going well until my hamstring started tightening. In a moment of weakness I bailed on the second set. The discomfort was enough that trigger point and friction massage was preferable. I inflicted some serious pain on the hamstrings via a tennis ball then followed it with gym work the next day. I don’t need another niggle flaring up at this point!

With running absent from the plans I should have been swimming much more instead it entered maintenance mode too. If there’s any positive in this (and there isn’t much of one) I’ve reached a point where I can maintain a one hour Ironman swim form. I’m not slower than before, but unfortunately I’m not faster either.

This brings up the underlying issue of focus. It’s not been there since ITU Worlds, like I peaked too soon. My attention has been drawn in surprising directions as I find myself pulled into the working world. I’ve spoken about sustaining this lifestyle and as coaching becomes more successful it takes more time. Perfectly reasonable, but I’ve become engrossed in the process to the point of distraction.

With other activities fighting for time it’s easier to make excuses. The pool will be too busy, too warm, isn’t good for training, I can train later, I’ll do more tomorrow… Excuses are easy and of course I’m working not just wasting my time. I want and need the business to be a success, but this is poor time management and prioritisation.

It creeps into every detail and the list of errors grows. Insufficient rest leading to fatigue which is another potential excuse. Poor recovery leading to niggles and tightness that shouldn’t be there. Nutritional mistakes as I still prioritise weight loss when increased intensity demands I fuel my training more. All leading to frustrating detonations like Friday evening’s turbo session.

This isn’t what a smart, focussed athlete does.

Moving on and peaking

There’s four more weeks till I taper. It’s been enough for some good Ironman performances in the past. There’s no reason it can’t be the same again especially considering those performance graphs have me fitter than this time last year. If I believe them when they say I’m losing fitness then I need to believe them when they say I’m fitter than 2009.

What’s needed is proper focus and prioritisation. My coaching is important, but it doesn’t need to impact on my training. I’ve time to do both. My personal emphasis for September is train, rest, recover and eat well. I need to be smart and work towards my goals not drift. Everything I do now is a step towards my race in October.

What’s key is gradually building back fitness, but primarily working to improve overall performance. When I land in Hawaii on September 26th I want to be injury free, fit, and ready to taper well. No taking niggles, excess weight or undue levels of tiredness to the big island.