My alarm rudely woke me this morning. I’d have liked an hour or two more, but was helping Biestmilch give out T-Shirts at the pier. It’s a busy time as freebies draw in crowds of athletes. If they’ve put on their Biest tattoo they get a free t-shirt. It’s already become a small Kona tradition. 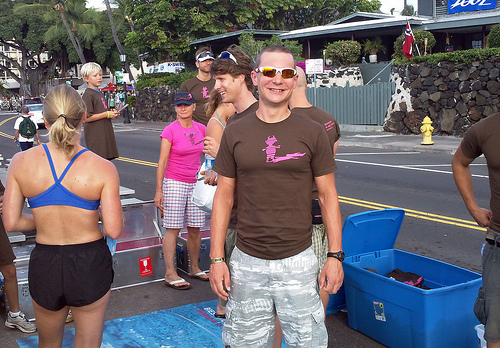 Lots of people showed us their tattoos some had been quite creative with them. Halfway through the legendary underpants run came past to entertain us. Once the sun peaked over the hills things started to really heat up and as business calmed I decided to get on with my run.

Another trip round my short circuit to test the Spidertech tape and new K-Swiss shoes. I set off knowing the next fifth-teen minutes might give me some hope for my calf. Jogging down Palani back to the hotel I was pleased I’d not had any issues and the shoes felt great.

I went straight to the A.R.T. tent for my regular morning massage from my fourth therapist. He did an excellent job digging into my calf, piriformis and psoas. Once again I walked away tension free. Each day I’ve been getting better all I need is my own A.R.T. therapist at home!

The dilemma I faced was which shoes to run in. I know it goes counter to popular advice, but the K-Swiss shoes feel so good. In terms of ‘breaking in’ a shoe I’m really not sure what I’d be aiming to achieve. I’ve never changed training for shoes before and don’t run much in my racing flats before I race in them.

As a step towards making the decision I broke my rule and went to the expo to buy elastic laces. A matching luminous yellow set with hibiscus flower prints on the toggle, very nice. A final jog in the shoes tomorrow and then at 2:30 I’ll make my choice as I check bike and bags in.

The rest of today was spent admiring the inside of my hotel room and watching reruns of House. I went for a wander later in the afternoon to stretch the legs and the town was dead. Smart athletes are keeping off their feet and finally resting. Other than this evening’s opening ceremony there was no reason to go out.

As ever the food at the ceremony is surprisingly good with the exception of the cakes, but it’s too soon for cake. I’d been telling some first timers how good the opening ceremony was. Sitting through it for a second time I got a sense of deja vu and have to admit it dragged. I think the first time is the best, after that I could take or leave it.

This afternoon’s spare time gave me a chance to compare taper training to past races. Not that I can do much with this information, it’s interesting to see where things lie.

Lay out the plan in WKO and compare the PMC with previous race tapers. If the pattern is similar to successful races then I’m reasonably confident it won’t hinder race performance. It doesn’t tell me if it’s an optimal taper, but gives guidance. There’s a process of trial and error in finding the best approach. 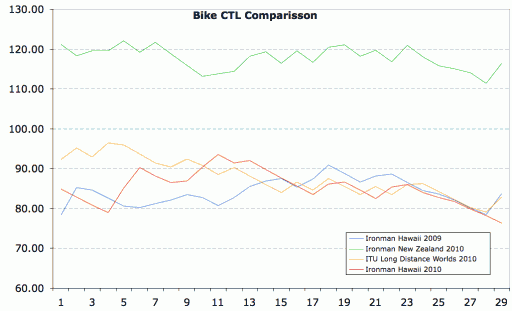 Starting with fitness (CTL) the two Kona’s are similar despite notably different approaches to training. In 2009 volume was predominant with more long rides at lower intensity. This year overall volume has been lower with one long ride per week and a lot more intensive riding during sessions.

Peak training occurs three or four weeks before the race. I’ll have been building CTL up to that point. After a slight drop from peak fitness I head into the final two weeks. The first week I maintain CTL then in race week I steadily lower it. Even New Zealand with its significantly higher CTL follows this pattern.

This taper has a larger drop in CTL leading into the final two weeks. A bout of illness just before I left the UK stopped me getting on the bike. Combined with travel I had a longer break from cycling than planned and my CTL took a hit. Ultimately I couldn’t regain the lost CTL without impacting my taper. 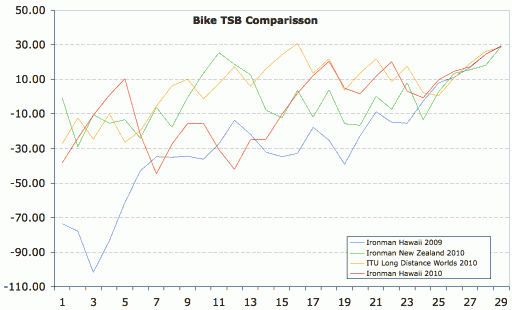 Choosing a target for TSB is more of a challenge whilst these four races were all good performances I’m not convinced they were peak performances. My bike TSB score seems high and I’d be happier with a figure in the teens. The problem comes that to lower TSB I have to train more so raising ATL and CTL.

It really is a balancing act and whilst I’d like lower TSB (I’ve raced well off low TSBs in Roth and Western Australia) I prefer more rest over more training. This is where the art of the taper comes in. I know a TSB in the high 20s will work and whilst it may not be optimal it’s a compromise that allows me the rest I want. 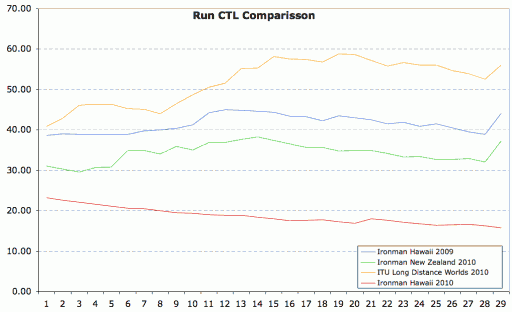 More for curiosity I’ve looked at the startlingly different run CTLs. We go from ITU Long Distance Worlds with a run focus and light taper through to this race where I’ve been unable to run. Low run fitness levels give no real sense to a full run taper. There’s nothing to rest or recover from.

My focus for the final few weeks has been short runs and avoiding developing further calf problems. I’ll be reliant on overall fitness levels to carry me through the marathon. This race’s CTL follows a similar flat pattern to 2009’s Kona and New Zealand just at a much lower level. 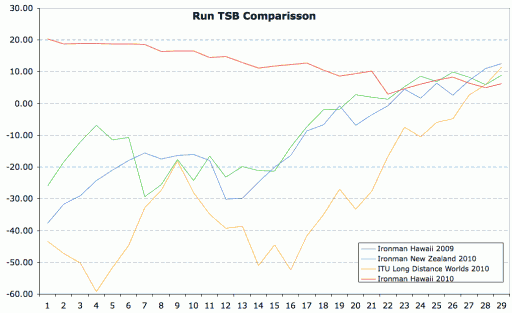 With falling CTL comes high TSB and this taper is unusually in that I’m training my TSB down to a typical race value. Somewhere around ten seems to work, but in most events I need to ease off running in the final weeks to get there. It’s hard to read anything into my run charts I really am going into this one blind.

The build up to Hawaii has left me uncertain of how the race will go. To an extent how similar the PMC charts are to my regular tapers surprises me. How much confidence that can give me is another matter entirely.

Lowered expectations have made me so much more relaxed about the event. In fact today I’ve been told I’m far too relaxed twice! Seeing the swim start in a video clip during the Opening Ceremony gave me my first experience of race nerves. It’s real and it’s happening in two days.