More than any other activity running defines my fitness. It was the sport I started with and whilst I occasionally grow tired of familiar routes nothing picks me up like a good run. Achieving my best run fitness back in July was an incredible high, then losing it with injury depressing. After four months of inconsistency I’m starting the rebuilding process. 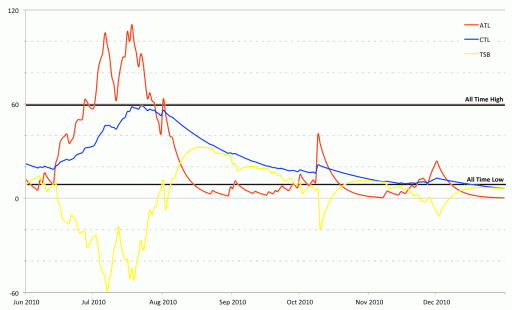 The Performance Management Chart shows that in run fitness (CTL) terms I’ve gone from an all time high to an all time low. It’s dipped before, but this is the most protracted break I’ve taken in the last seven years. At my peak I had to run at least 10km at Ironman pace to produce sufficient stress to raise CTL, today a couple of kilometres jog would be sufficient.

Time out from training whether through injury or choice will put anyone in this position. Strong run foundations remain, but the lack of training increases the risk of injury. As fitness trends down the body ruthlessly disposes of adaptations surplus to requirements. Subtle localised changes in the muscles that all the swimming and cycling in the world won’t help. The aerobic engine can be at full capacity, but the chasis not up to the job.

Building to Kona I worked swim and bike hard in the absence of running resulting in improved swim and bike performance. Somewhere on the marathon my legs gave out, a training pace went from comfortable through challenging to impossible. My lungs and heart could shift the oxygen, but leg muscles couldn’t cope with the load. It was one of the more painful moments in my racing history.

Each race and subsequent recovery puts me in the position of rebuilding fitness, typically I’ve dived back in taking a week or two to return to ‘normal’. Older, wiser and nervous about a calf that stopped me running for four months I knew caution was required. A gradual increase in run volume and stress over the coming month, not a jump from nothing to eighty kilometres in a week.

There’s huge temptation to rush, I know how fit I’ve been and not being there makes me nervous. If I’m not running more than thirty minutes now how can I expect to run a three hour Ironman marathon in July? I see similar doubts amongst my athletes, concerns that they need to be training harder now for performance in the Summer. I’m not suggesting they shouldn’t train hard, but intensity has to be planned, let the doubts take control and it’s easy to push to breaking point.

Aware of my tendency to work too hard until fatigue tempers my efforts I’ve built limits into my plan. Initial runs were 3km so whatever pace I found myself at the opportunity to do harm was minimal. I kept the focus on posture, stable hips and good turn over doing my best to ensure I was running well, pacing was an after thought. Unsurprisingly I started too hot and ran above race pace, but the short duration seemed to do the trick.

From a fortnight appreciating that I was running again if only for fifteen minutes I’ve progressed to a full half hour. Even when it feels good I don’t go further or aim to set PBs, this isn’t about rushing just following the plan. Some may question the lack of intervals, hill work or long runs, but at this point thirty minutes is training. I’m forgetting what I was doing at my peak and concentrating on what’s needed now. 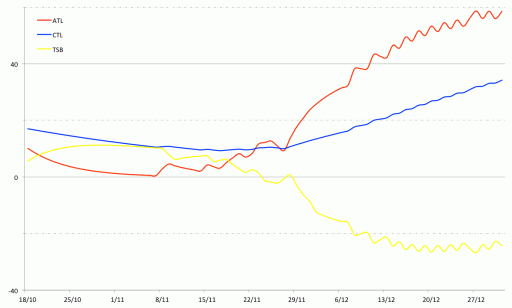 A simple plan of consistent running predicts the fitness growth in the above Performance Management Chart. Starting with daily half hour runs and adding hour runs as the month progresses I could achieve a CTL I’ve raced from before. I won’t be in my best run shape, but I won’t be in a slump, all that’s required are regular steady runs.

There’s a hint of optimism with run volume increasing over the month. I’m not sure I’ll reach the point I can sustain it, but I’m reassured that through consistency I’ll start 2011 with a platform to achieve my goals. Once running is easy again I’ll worry about the details. Only then will I consider weekly volumes, duration of long runs, hills and perhaps the occasional interval.

At the moment it’s just good to be running again, performance can come in the New Year.