I’m breaking my run today. After thirty-one – I sneaked in one extra – consecutive days of running it feels odd not to be going for a thirty minute blast round the block, instead I’m staying in and looking at the statistics for April, a month that has put my run fitness back to the early season levels of previous, successful years. The temptation to keep going is strong, I could put my trainers on right now, but I need this break; without it I’m in danger of obsessing over a simplistic goal ignoring the broader picture. My legs are tired, sessions vary little in distance or pace, my focus has been completing the challenge. It’s a route that has eliminated diversity from my training and bears the potential for injury if carried too far.

Leaving the criticism aside for now a lot of positives have come from the challenge. Thirty runs of at least thirty minutes over thirty days has enforced a level of consistency on my training that had been absent so far this year. I am unequivocally fitter for it and my perception of running has changed for the positive. If I draw a Performance Management Chart (PMC) for run training so far this year, the blue fitness curve has reached a level I haven’t seen in eighteen months, a level I have successfully raced at. 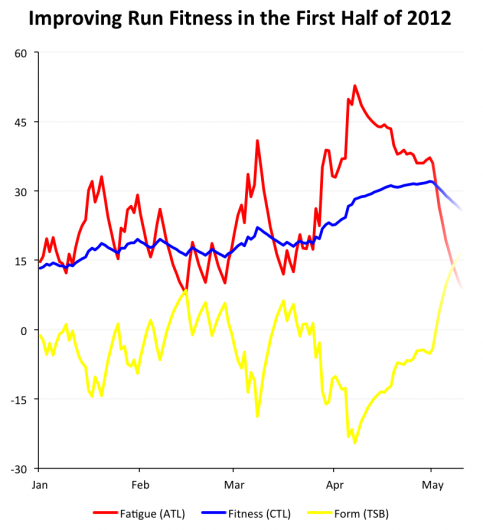 Consistent, steady growth in fitness; sustainable, but hard to take further with a mere thirty minutes a day. Of course the challenge allows me to go further, volume and pace are unrestricted, but doing so while cycling and swimming is another matter, especially when coming from a relatively low level of fitness. You could view the last month as the creation of my run base – building a platform on which I can properly develop as a runner. After eighteen months of inconsistency it remains an ongoing task, it will take more than a series of homogeneous runs to complete this journey. 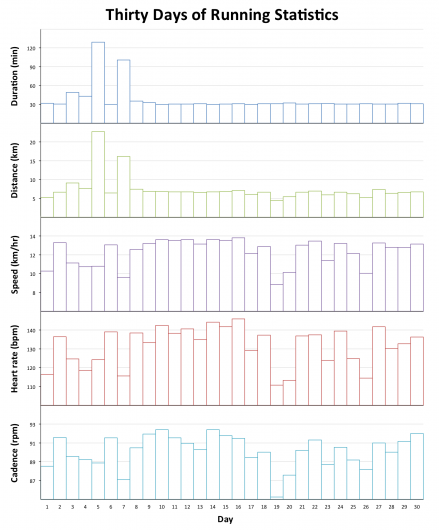 Nineteen hours covering roughly 223 km (139 miles) at an average heart rate of 131 beats per minutes, an average speed of 12.3 km/hour (7.5 miles/hour) and an average cadence of 90. The first week varied in distance and duration, but after that each session was largely the same; speed, heart rate and cadence track each other – lower for easy sessions, higher for the harder ones. Not that I ever ran hard. This frequency was new enough without adding any additional stress, I was happy to complete the challenge in the simplest – easiest – manner possible. Up till now I’ve lacked the confidence to push myself further.

It feels like I’m damning the exercise with faint praise. It did its job and delivered exactly what I was looking for – I am fitter. As a tool the consistent run challenge has always worked to lift fitness and to bring me into reasonable running shape. On its own – as it was this April – it has never brought me into my best run form. That takes more. The first time I tried this approach I used a mix of distances and speed, racing every week in addition to the daily run; the second was much the same, but this time it would have been reaching too far. Next time, quite possibly in June, I will push for more, and I’ll do so on a firmer foundation with the confidence to achieve it.

Having seen I can comfortably run every day and feeling the benefits of it I need to focus on endurance and pace. I feel an urge to race again.