☰
Home > Is This The Beginning of a Sustainable Athletic Lifestyle?

Is This The Beginning of a Sustainable Athletic Lifestyle?

My life will sound familiar. I wake early, get training out the way and settle into the day’s tasks; late afternoon or evening I’ll train again. Big training days tend come at weekends when they can. Occasionally I sneak in extra midweek. Plans have to be adaptable; training fits around life. Contrast with last year when the focus was how could I train more: life fitted around training.

I need the time and energy to work and train without overloading my day. I need to build fitness without pressure to perform. Removing the road to Kona from my plans delivered on these fronts. The decision was right: I felt relieved to make the choice. But the absence of the single motivation behind two years of work creates a vacuum. Without that immediate need for fitness it’s easy to drift.

New found freedom. I can race when or where I like; the rules no longer apply. I may advise against a marathon in preparation for an Ironman, but only if you want to perform. I can enter whatever I want. In my excitement I hunted down as many races as I would fit on my calendar. Marathons, Ultras, I even considered the Deca-Ironman for a few days. Fortunately I never sent any entries in.

Racing more, racing long: these aren’t routes to reducing pressure. I set aside Kona so I could emphasise other areas of my life. As quickly as I’d placed them on the calendar they were gone. It didn’t take much to build sound arguments against racing ten Ironmans in ten days. I’m free to race whatever I like, but that doesn’t mean I should.

I drifted. There was a sense of irony when I wrote my Endurance Corner column. Your Best Season Ever. I wasn’t sure I could comment. I’d hardly put the foundations in place myself. Truth is the five mistakes to avoid came from the very problems I was dealing with. Breaking myself by pushing too hard, inconsistency, wanting to enter everything and largely missing the fun of training.

Plans I’d made in November – built on the assumption of going to Kona – held little relevance. Besides I’d underestimated the impact of month’s of minimal running. This really is back to basics. Progress made before Christmas was lost by a bout of illness that laid me up for a few days. Timed perfectly with festive food I started the year feeling unfit and sluggish.

How many times can I write about the need to manage training for your fitness? To carefully build the work you’re doing and not rush? Despite the frequency with which I cover the theme it took a while to sink in. I was the triathlete needing to be careful in my build up. It eventually clicked and since I’ve started running and riding a bit easier the sessions have worked.

Training isn’t fully structured yet, but I’m no longer adrift. I hold to a simple system that each week should in some way improve upon the last. Perhaps in volume, perhaps in frequency or perhaps in intensity. I’m not too stressed as long as I have time for work, life and this blog! I’ve reverted to the habits of a working triathlete: 9 to 5 is mostly about work, the rest of the time my own.

But I’m enjoying it and week on week I am improving. More importantly the desire to train is returning in full. I enjoyed my first ride of the Challenge Henley course so much – despite a cramp in the last few kilometres home – that I was back three days later. Two long rides in a single week: I wanted to be out there again. Cramp was just a sign that I needed to manage my effort more and not get carried away in the moment. I did say I was unfit!

Whilst I rekindle my love of training I’m also making solid progress with coaching. Numbers have grown quickly; I’m near capacity far earlier than expected. There’s time in the day, but insufficient room in my head! Once I can’t give an athlete the attention required I can’t take on additional clients. It’s close. I find myself considering what next? I’m exploring these steps far sooner than anticipated; I’d not planned far enough ahead.

Frustrations and lack of fitness on a personal and athletic level are balanced by success elsewhere in life. My goal has always been sustainability of the lifestyle and I’m making good progress. I never considered exactly what sustainability would look like and perhaps that’s where the difficulties lie. My work is flexible and rewarding; I’ve time to train and build towards my own sporting ambitions. What more could I want? 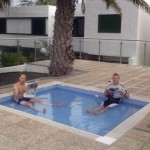