Early Friday evening and I’m only just posting content. It’s a little off topic too. The last fortnight has been busy, challenges on the home front hit my motivation to work or train. The situation is much improved and this week I’ve been occupied with both work and training. Blogging falls in a grey area between work, life and training and as such has suffered. My goal of at least two relevant posts a week is unlikely to happen.

Those looking for fresh triathlon content should read my March article for Endurance Corner which went live on Thursday. It’s training camp month over there, for once I’m stuck in the UK. I consider myself an experienced camper; you could describe the last two years as one long training camp! During that time I was fortunate enough to experience three Epic Camps. I’m sad to see them coming to an end with a finale in the Alps this summer.

I will be back in Lanzarote with Steven Lord and Jo Carritt for my first real training camp. That’s not till May so I decided to bring the training camp home. It won’t tan my embarrassingly pale skin, but with sufficient motivation I can put in all the work of a trip abroad. One week of long, hard training starting on Monday the 28th March. I pondered the idea of a virtual camp, but lacked the time to take it from theory to practice. Maybe next time.

I’m optimistically expecting superb weather (and not checking long range forecasts). Winter is over; lately there’s been some fine weather. Unfortunately not today. Despite miserable grey skies and text messages warning me of nearby rain I went out. Four and a half soggy hours raised this week’s ride time into double figures. I really am training more! But I froze: slight misjudgements in clothing make a huge difference.

There’s a certain satisfaction in this kind of ride. Surviving with all limbs and digits intact! I wouldn’t have ridden had I known, but I am glad I did. Proof that I’m not a fair weather cyclist, but also the tipping point in a decision making process. Follow me on twitter and between tweets on my daily routine you’ll have seen I’m considering mountain biking.

I’m rarely motivated to train indoors. I am chasing better performance, I just prefer to chase it outside. A turbo trainer is a useful tool, but I hate it! My first UK winter in two years was a struggle that ultimately resulted in minimal cycling. Mountain biking has the potential to get me riding when conditions might otherwise keep me inside. It may not be the most relevant triathlon training, but it is better than not cycling. Looks fun too.

Of course I have looked at Xterra… And the idea of the Hawaiian Airlines Double – the best combined time in Ironman and Xterra World Championships – did enter my head.

Regular triathlon training blogging resumes next time. I have a few subjects to cover, but I’m always looking for more. If you have any aspect of training and racing you’d like me to write about then leave a comment, tweet or email. The hardest part of regular blogging is new ideas! This weekend the forecast is good so I’ll divide my time between more hours on the bike and writing a guide to starting with power training.

… One more thing. I’ve been nominated for Best Triathlon Blog in the Triathlon Week Tweet Awards. That title is a debate in itself, but take a look and vote if you like! I’ve been honest and not voted for myself. Canvasing is okay though? 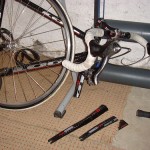 The Black Arts of Training