Tough races are often the best learning experiences. I knew I would have problems at the Outlaw, but come away with useful data and insights for future events. It was about the bike, a chance to test the one area I’d really trained this season. Performance was good, I pushed hard, though felt there was definite room for improvement.

Having reported on the Outlaw at the start of the week, it’s now time to pick the race to pieces.

Finish time is the only piece of data I have for the swim, it’s not good. There’s little to analyse other than my subjective experience. I am aware I was undertrained and performed badly on the day; fitness and open water skills limited me. At my peak I have always felt very comfortable coming out of the water, but lower swim volume led to more fatigue. How much impact this carried into the rest of the day is impossible to gauge.

I set an ambitious target of 250 watts for race day. Training suggested I could hold that pace and I believed I could equally fuel it. It was a stretch and would take me into territory likely to impair running, but I wasn’t expecting to run well so why not try? 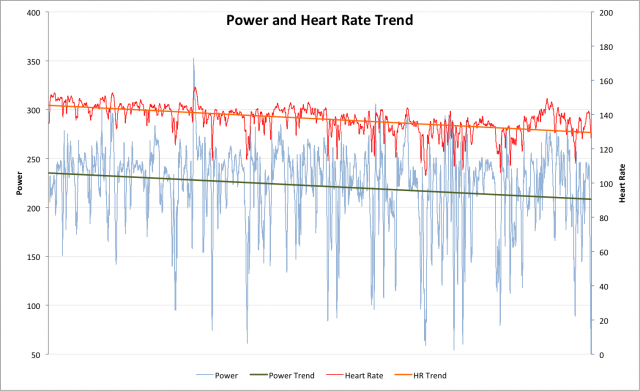 The trend was downward – an initial hard output trailed off as the ride progressed. I was not aerobically decoupling, power and heart rate fell together, the effort simply dropped. Fatigue was a definite factor, but so was the mental game. I lost focus, experienced nutritional problems and increasingly freewheeled downhills. The athletes around me and growing traffic broke my consistency; there were frustrating moments as I waited for cars to pass those a lap behind.

To a degree it explains some of the fall off in power. Unimpeded on the return leg I raised my effort back to target and rode the final half hour strongly. Starting the ride attempting to average 250W was too hard and broke from my usual approach of building to race pace. Ironman New Zealand has comparable figures, but the race started easier and finished harder.

The first chart above demonstrates how far I fell short of my pre-race targets, I don’t come close. To sustain a cap of 250W would require me to be working above it as much as below, whilst I pushed towards it I wasn’t able to go that far. Adjusting my targets to typical proportions of FTP, as in the second graph, brings my performance inline with expectations.

My goal was too much of a stretch. I didn’t feel at my best on the bike; the fortnight before the race was too light and my taper improvised in the final days. Allowing for this, perhaps there were five or even ten watts more in me on a better day with better pacing. Compared to New Zealand this felt like I was riding at a lower intensity.

There are clear lessons – better consistency in pacing, dealing with other athletes more effectively, holding back at the start and sustaining the effort through the middle lap. Comparing power and performance with other riders at other races makes me painfully aware that I need to consider a new race bike. I ride well, but I also give away time with my terrible aerodynamics.

Despite missing the original target I’m happy with my performance; I worked harder. I’ll lower my caps for Challenge Henley and put more work into sustained efforts at these levels. Having the course to train on should help with maintaining consistency in the race.

This is the first time I’ve collected detailed run data, but with the poor training it’s hard to draw conclusions. Run/walk was not enough to keep me moving through the marathon, my legs began failing after an hour. The positive I take from the chart is my cadence is very consistent when running; technique felt good throughout, especially when raising the pace at the finish. 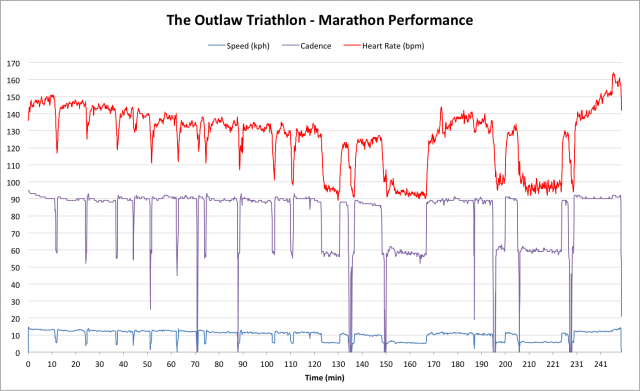 Initial pace was high and perhaps something I could have sustained in the past, but with my reduced training there was little chance of holding it for twenty-six miles. Walk breaks were too brief during the first lap and I might have benefited from extending them. However once my legs went, I had to walk, no adjustments to my early strategy could change that.

Knowing I would finish outside my normal time I eased back. Physically the potential was there, I ran the last two miles at a reasonable pace, but the mental edge wasn’t. I didn’t have the will to push through the discomfort. The only benefit of holding back is the speed with which I now recover.

I survived the run. It was harder than I’d anticipated, but I did stick to the most important goal – I remained injury free. I’ll keep building training as my running improves with an aim to complete Challenge Henley in far better shape. Racing the marathon remains a way off.

A tougher day than I’d expected and I never felt fully on my game. Even cycling, where I should have been most comfortable, wasn’t at one hundred percent. Being away from racing for so long had made me rusty, I didn’t want to be there when the day started. Since I’ve finished I’m re-motivated and keen to race better.