Wednesday morning and once again I slept in; eight hours and I was still tired. Not that this was unexpected, I’ve survived enough Epic Camps to know what would come – the inevitable crash. From the peak of fitness to the depth of lethargy, the legs that towed the bunch across the Alps had vanished. Three days after camp a last minute invite to the National Club Relays was probably best declined. Of course, I accepted.

As the week came to an end my immune system gave up and I added an irritating cough to my ailments. I was the poorest ringer possible – in no shape to race, but the Police Sport UK team was relying on me to fill a gap. Not that I have strong connections to the police, a couple of athletes I coach and my brother-in-law are the closest I come to uniform. It didn’t seem to matter and I wasn’t worried so long as I didn’t have to deal with any rioting!

Commitment made I was up at 5:30 on Sunday ready for the long drive to Nottingham; after a week of lie-ins it was a shock to the system. I wasn’t filled with enthusiasm and found myself regretting volunteering. At least the motorways were clear at that time. Those initial reservations had vanished by the time I reached Holme Pierrepont. This was going to be fun.

The relay format is simple, but incredibly chaotic. All four members of the team swim, then all four bike and finally all four run. Short bursts of intensity with long breaks in between, the exact opposite of my preferred format. I was concerned I wasn’t the right choice for the race, but the team was relaxed about the competition. We were winging it. There was uncertainty as to how events would run, but as third man I could watch what the others did.

We wandered down to the swim start to see our lead man, Andy, off. I paid close attention to the first change over to fully appreciate how disorganised it was. The challenge in transition was finding your team mates amongst the sea of Orca and Blue Seventy wetsuits. Our second man, Neil, had an old suit with distinctive yellow logo which made him easy to spot. When he exited the water I ran forward, grabbed the elastic band (the baton) and dashed into the water.

It was just over a week since I’d last swum, but in the excitement I felt great. This was different to my usual races – swim as hard as I could for 500m, then rest afterwards. I kept the pace up, but lacked the sharpness of regular swim training. In no time I was exiting the water and yelling out for Carl, our fourth man. Once I’d handed over the band I walked back to the expo to wait for the next stage.

The wind was picking up and clouds blocked out the sun, in my wet tri gear I reflected on how experienced relay racers used different kit for the swim. New to the game I spent the hour between events shivering, trying to find shelter from that cold wind. It wasn’t ideal preparation for a bike time trial, my legs were freezing as I waited for Neil to complete his final lap. The second the elastic band was on my wrist I was off.

The start of the loop round the lake was with the wind, speeds were high. It was obvious my legs didn’t have much in them; whether from the cold start, or more likely the ongoing effect of Epic Camp, they were not going to perform. I pushed to get the most I could, but watched my power with disappointment. It felt hard, heart rate was up and I was producing fewer watts for the distance than I manage in training.

Turning into the headwind was tough going. It was disappointing to see the number who considered drafting acceptable along this straight; a few of the top placing teams blatantly sat on wheels. I just held whatever pace I could and tried to ignore the pain in my legs, reminding myself it would be over in no time. Just suffer the headwind three times. It wasn’t long before I was back in transition and handing the band on to Carl.

The hardest part of waiting is the fear you might be late. I headed to the final transition too early, Neil was still there. As it was he put in a fast 5K so I didn’t have long to wait after he left. Again my legs had nothing. No soreness, but when it came to pace, the top end was gone. I pushed myself, especially during the final two kilometres of headwind, but this was unexceptional racing. Once the band was on Carl’s wrist, my job was done.

Carl closed well bringing the team in with a total time of 3:25. In the top thirty, but losing out to the Police Sport UK vets. Not that we were concerned with time or placing, it had been fun. I checked my results and was disappointed by what I saw – wrong distance, wrong time. I will be back though, probably in a team I actually belong to and hopefully with a little more zip in my legs. The relays were too much fun not to try again. 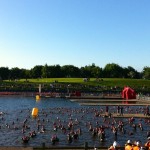 A Relay Report from the Outlaw Half 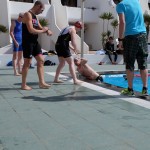