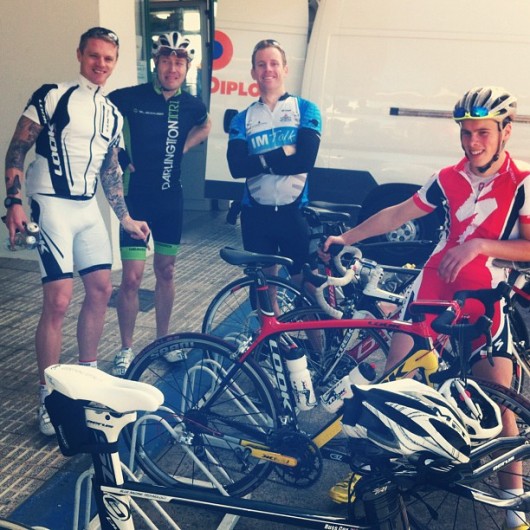 With a slight creak and sudden easing of tension a seatpost clamp changed the nature of my week in Lanzarote. Years of tyre spray and dirt corroded the bolt till it stiffened, seized and finally sheared leaving this last minute packer with little choice – rapidly disassemble and pack the time trial bike instead. Camp was going to be a grind, the 54-42 on my Blue Triad combined with a 25 cog on the rear guaranteed some choice moments of low cadence, high force pedalling in the face of hills and headwinds on the island. But at least I’d noticed the missing trainers and wouldn’t be taking an unplanned initiation into barefoot running in the scrubland around La Santa. Bookending camp misfortune was the cold that indicated its presence with an innocuous sniff on arrival at Arrecife; seemingly innocent, but it would bring my training to an early end, sleeping out the final day in our apartment. Sandwiched between those moments was a quality training camp with a great group of athletes.

I’m a relaxed person and this was to be a relaxed camp. I had no intention of burying myself in January and wasn’t planning to take anyone else down that route. While Dave was closing in on the peak weeks of his Ironman South Africa build, Neil and Rich had plenty of time before Roth and Germany arrived. Swim, bike and run lots. I started camp big: three kilometres in the pool, circumnavigate the island on our bike, then run; hopefully sufficiently tiring to put pay to silly games. I wasn’t surprised that the first few hours were high pace, nor shocked to shoot out the back, as I dropped through my limited gears at any hint of ascent. If it didn’t kill me, I was sure this would make me stronger. My legs might have been suffering, but illness struck the camp early, forcing Neil to retreat home; shortly after Dave wisely called it a day, leaving a small group to ride El Golfo. We sped down the highway assisted by a firm tailwind only to meet road closures and no access to the scenic circuit, instead we were left with a monotonous drag, back into the headwind, before climbing Fire Mountain back to La Santa. Not to plan, but a big day none-the-less.

Each day followed a similar pattern: attempt, in a mildly disorganised fashion, to complete – or for some compete at – all three sports. There was an element of trial and error to determine optimum – meaning warmest – times for swimming and running; Lanzarote may be hotter than the UK, but early morning and late evening swimming was a cool affair. Runs on the hills and trails posed less of a problem,you easily kept warm, the question was whether you wanted to be running after the bike? A rough routine was established and health allowing we all managed to complete a very full weekend of training. 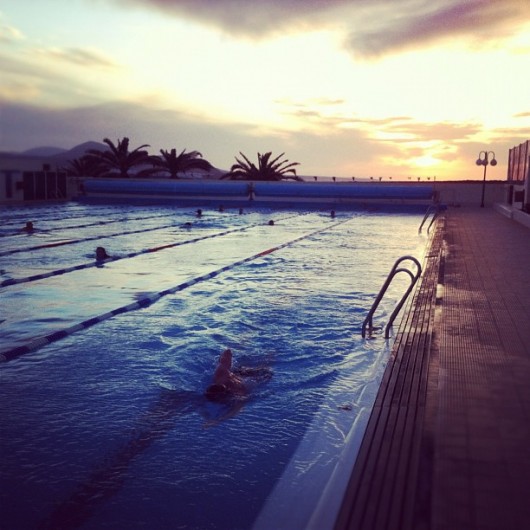 Not unique in our desire to abandon the cold homeland, Lanzarote was packed with British triathletes. It was particularly pleasing to be able to catch-up with Steven Lord; always good company for a long ride and with plenty of experience, I was sure the others would be happy to have him along, if nothing else he could drag us round the island. It was an opportunity to educate them in proper long riding, complete with coffee stops. A slight confusion on my part ensured our first ride together was ‘proper’ – climbing over Haria, descending to Orzola, back up to Mirador del Rio, back over Haria from the other side, and then – down the centre of the island, over Fire Mountain once more and roll downhill to La Santa. Perhaps a little much when we planned a hard blast up Tabayesco the next day? My legs felt that 42.

Tabayesco was my peak, not in performance – I summited in a time I can’t be bothered to check – but from that point on I descended into illness. It was a general camp high point with some great climbing from everyone, pleasing to see a hard effort after three solid days of riding, particularly Rich pulling off an impressive 26:30 to the cafe. We’d worked enough, that time trial took us into an easy day, camp easy, three hours choice training. Despite a cold I struggled through 2.5 hours of lighter intensity sessions before admitting defeat, in hindsight I should have rested, because I woke on wednesday dead to the world.

I’d spent a restless night, struggling to breathe and concerned at the prospect of the final long day. Having set the target of a second round-the-island trip I didn’t want to let the group down, but it was clearly a bad idea; reluctantly I sent them on their way and returned to bed for the morning. By all accounts while I dozed in a darkened room they had a decent finale to the camp, hooking up with Steven and covering a large part of the island. It was disappointing not to be there, but realistically I’d have been a liability. My goal was to return from camp able to build on the training I’d achieved, twenty-five hours was plenty after a winter barely touching double figures.

A day lost to illness, a day lost to travel, to cap my frustration off more sickness on my return; moving from head to stomach I seem to have picked up another of the bugs that plagued our sick camp. Out with a splutter not a bang, I would like to train now, and all the rest leaves me able to train, but I’m forced to wait another day. Broadly camp was a success – I believe I got the kickstart I needed and recovery allowing I’ll be out training tomorrow. First steps on an uphill road to race fitness.