☰
Home > How to Lose Five Kilos in Thirty Days

How to Lose Five Kilos in Thirty Days

Even if you pay as little attention to the media as me the obsession with weight loss is pretty obvious. In the past week I don’t think a day has gone by where my brief exposure to some TV or newspaper hasn’t had a mention of diet. Not entirely surprising with the ever increasing weight of the population and associated health concerns.

However in my case I’m coming at weight loss from a different point of view. When I landed back from Lanza by any reasonable interpretation I was a perfectly healthy and acceptable weight. The problem is race weight. Race weight isn’t a reasonable interpretation, it’s about being lighter and leaner and going faster for it. In simple terms if there’s less of you to move it takes less absolute power to move it. By the standards I aspire to I was racing very heavy.

So I embarked on a project to shed the pounds and to get to a truly trim race weight in time for Ironman UK. Over the years of training I’ve read and learnt a lot about nutrition, but for this goal I opted for the Paleo Diet I’d been introduced to out in Lanza. So far it’s worked pretty well as the chart below shows 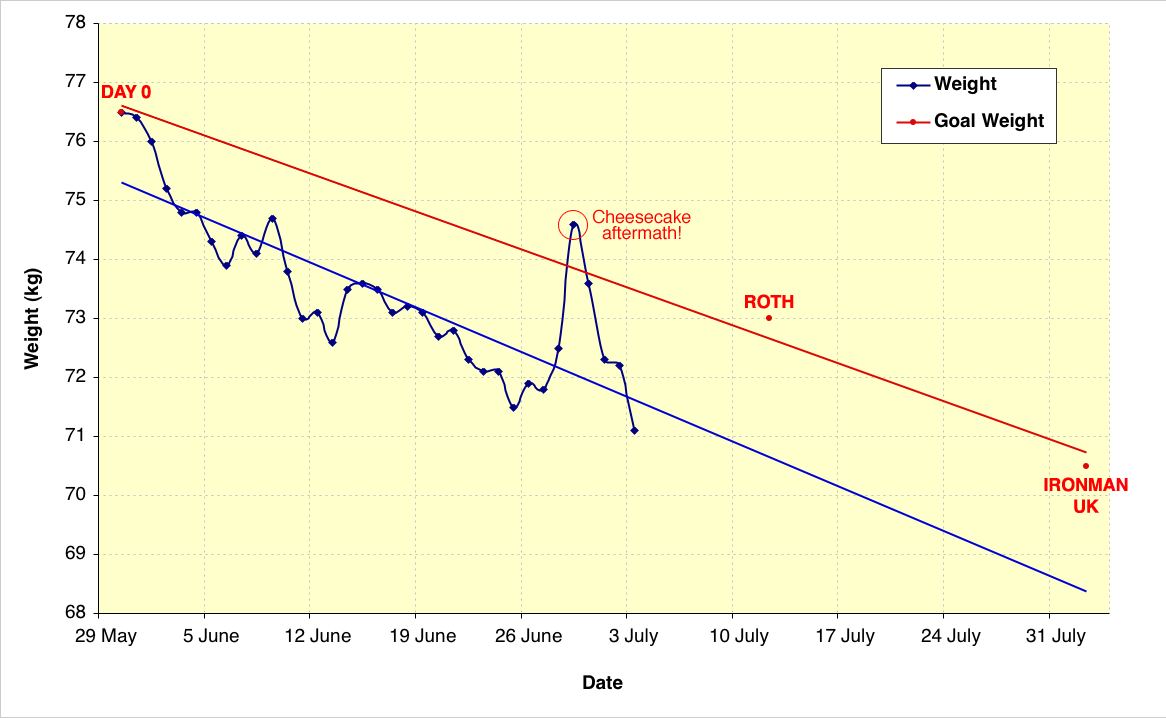 Ignore the cheesecake blip! That shows the impact of a sudden massive food intake and indulgence, it also shows how quickly it passes. Whilst I weigh myself every day it’s the trend lines that are important. You’ll see I set myself a red line which was goal weight loss. It’s a straight line from my starting weight (76.5kg) through to my goal weight (70.5kg). What you’ll also see is blip aside I have progressed far faster than expected. To the point where I’ll be racing Roth at close to my goal weight. Great news for me as it means I’ll have a better idea of how well it works for me. I’ll admit I’m also hoping there’s room to go a little lighter still, maybe the 69.5-70kg range.

I’ve put summary links relating to the Paleo diet in my blog before. Now I’m not 100% strict, but I think I do a reasonably good job. For an athlete perhaps the oddest aspect of paleo is the relative lack of carbs. There’s no more stuffing down bread, pasta, rice or oats! The first couple of weeks I think it was a bit of a shock to the system. Apparently this is normal and now I don’t miss any of it at all.

My diet isn’t completely lacking in carbs. The reality of the amount of training I do is I’m regularly burning off 2000 or 3000 calories a day on top of my metabolism. That’s a hell of a lot! For those looking for dietary tips that is another significant factor in my success. If you burn through calories at that rate gaining weight takes work!

What carbs I eat come mostly from a mix of fruits, salad items and vegetables. A lot of them are quite low in carb and you often end up munching through giant bowls salad. Great for your health as there’s plenty of nutrients in there. I do throw in some potato at times to give myself an extra carb top-up. If you look into the Paleo Diet for Athletes there is a lot written about how to take in some extra carbs. Train a lot and you can’t get away without them entirely.

The primary time for taking on carbs though is during training itself. Once I’m in training I will use the same sugary energy products I always have. Now I get to eat the oats from the flapjacks in my back pocket. I don’t worry too much about the energy source during training, just so long as I have sufficient calories to keep going. Even to the point of allowing myself the treat of a cake on my Tuesday ride coffee stop.

So like a good Paleolithic man my carb intake is quite low and primarily from natural sources. I am not so good when it comes to dairy, I admit I still use it and strictly I shouldn’t. What can I say, I love cheese. I have a small amount of cheese in my diet most days and maybe a tiny amount of milk. It boosts my calorie intake and it doesn’t seem to cause any harm so I’m happy to stick with it even if it’s not going by the book.

A final confession. I have a large low calorie hot chocolate drink most evenings. That’s definitely not on the diet, but again so long as I’m losing weight I don’t worry about it. There’s the odd other thing that gets in there too. It’s tough to stick with 100% and I don’t entirely need to. The removal of the heavily processed carbs outside of training seems to be the most significant factor.

I also suspect that my calorie intake is solidly in deficit and has been for the duration. This will pose an interesting problem once I’m at my target weight. For me at least the process of losing weight has been relatively straight forward. Maintaining a good weight will be a tougher challenge.

The important question is how has performance been. I’ve not noticed a significant impact, at least not one I can attribute to the diet alone. Factors like general fatigue, lack of sleep, heavy training loads all blur into one. My running and surprisingly my swimming seem to have improved with the loss of weight. My cycling at the moment is a little flat though I suspect fatigue issues as opposed to diet. July 12th in Roth could be a very revealing day for me.

Should anyone be interested I’m sure I could post up some typical daily diets. I thoroughly recommend researching the Paleo Diet if you’re looking for weight loss. It’s worked very well for me and I feel great for it. I’m sure there are other routes to the same goal, but this one made a lot of sense. I can’t wait to see if it pays off on the race course!