Learning the Art of Running Faster 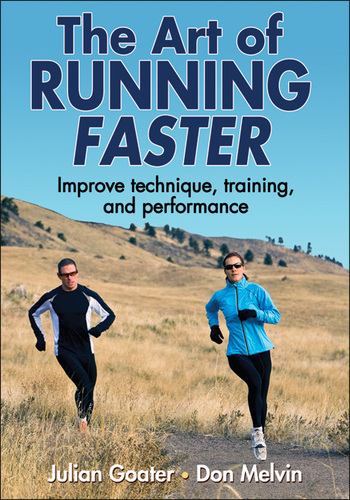 Recently, outside my favourite coffee stop, a small group of journalists sat interviewing the cyclist Rob Hayles. I only know who the interviewee was because we asked the interviewer afterwards; Google filled in the rest of the details – Rob Hayles has won Olympic medals and is now a presenter on Eurosport. It demonstrated to me that my singular focus on triathlon has left my sporting knowledge lacking. So when I received a press release for a new book, The Art of Running Faster

by Julian Goater and Don Melvin, I turned to Google again to establish that Julian Goater is a former world-class runner and since a successful coach. The book presented an opportunity to learn from a top tier athlete and coach; perfectly timed given my current focus on running. I decided to branch out and take up the offer of a review copy for this blog.

The presence of the word Art in the title is telling: this is a book built on experience and a genuine passion for good running. It isn’t a manual of tables and charts from which you can build your own training program; you certainly can develop a program, but the book requires the reader to engage and understand the principles behind it. The Art of Running Faster is divided into two halves. The first focuses on the fundamentals of run training with an emphasis on achieving efficient technique, the second looks at refining training to peak for a race. This is about training smarter – Goater repeatedly stresses the need for running to be skilful and every session to have a purpose. There are no references to percentages of heart rate and volume is mentioned in asides; what matters is how you run and how directed that running is.

There is little to disagree with here. All too often run training is viewed as a matter of going out and logging the miles, and while that is part of the process, running faster takes more than clocking up the distance. I appreciated the emphasis on technique and developing good run form, having put a lot of work into this area myself. But I wonder how easily the descriptions can be followed if you hadn’t been coached towards better technique. The chapter on stretching uses photographs to illustrate each exercise, and a similar approach would have been helpful for overall technique. Those concerns aside, guidance is practical and firmly based on experience, as Goater freely admits.

A long run, a fartlek run, a hill session or some speed work are the staples of the week and in the second half the book outlines how to use the latter two. Readers are not handed a set of sessions, but rather talked through the purpose and process of using this form of training along with how it might vary through the season. Each new concept is wrapped in an anecdote – stories from Goater’s own history or that of runners he has known – evoking the feel of a trackside lecture from an old-school coach. The chapter on the mental approach to racing is a prime example: it stands out as an insight into elite racing more than a guide to sports psychology.

There is nothing groundbreaking here, but concepts are clearly explained and the abundant anecdotes make the book much more than a dry, technical manual. The tools to build a training program are provided with minimal hand-holding; all the principles are there, but it’s up to the reader to develop their own plans. As an experienced runner I was relieved to be left to my own devices. For those that need it there is an appendix with a few brief example training plans, but the book itself is mercifully free of tables of paces, heart rates or familiar training sessions.

This definitely isn’t a “run your fastest 10K in eight weeks” book. Novice runners might find that the information isn’t explicit enough for them to build a running plan from. Those with more experience, looking for ways to gain an edge, will likely pick up a few new tricks. And if not, the insights into British running history will keep you entertained along the way; there are the makings of a separate biography in here. I certainly gained some new ideas and finished the book eager to train.

My copy of The Art of Running Faster

by Julian Goater and Don Melvin was kindly provided in eBook format by the publisher Human Kinetics.