As a race approaches I like to put my goals in perspective. I attempt to estimate my potential from a brief history of training data and race results. It’s speculative at best – there is as much interpretation as there is extrapolation; the word ‘feel’ crops up all too often in the analysis. With Ironman Lanzarote four days away – much as I’d like to ignore it – I need that feel for race day. My problem is I have never trained like this before: fewer hours, more inconsistency, I’ve not raced at such a low fitness. I lack a frame of reference from which to judge my potential on Saturday. It’s unnerving.

Wanting to quantify the situation I inevitably turned to the logs, totalling training hours over the past sixteen weeks – a sufficient period for an Ironman build. Unsurprisingly it was less than previous races, but my perception that I’d barely trained was equally far from the truth. Over the four month period I average roughly ten hours per week. More than nothing, but less than I used to do. 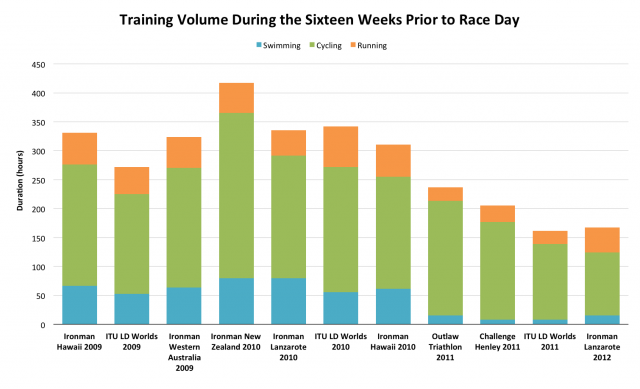 Although hours give a limited account of preparations, I couldn’t resist comparing with previous races. Only my recent run training approaches the volumes of my more successful endeavours. But perhaps comparison with last year is more relevant, overall training volume is closer; should I expect a similar swim, a slower bike, but a faster run?

But it’s not just how many hours you do, it’s how you do them. The 2010 Ironman World Championship or ITU Long Distance Worlds in 2009 demonstrate the point – performances failed to live up to the investment. It may be reassuring to know I’ve trained more than I imagined; it just doesn’t say much about how I might race. And that perspective on performance is what I’m after.

Those slim blue lines that pass for swim training worry me. I vividly remember my arms abandoning me during the second half of the Challenge Henley swim; and I suspect I may be lining up for a similar experience. I am concerned enough that I made a rare visit to the pool. With a Wetronome beeping under my goggle strap I performed a set of 200s hoping to gain a feel for my current race pace. The choice of 200s over 400s says it all; it’s depressing to think how I would have cruised through that set in 2010. That’s what you get for dodging the water. I might – with careful pacing – manage around a 1:10 with minimal suffering. It could be worse.

The cycling and running I do is of good power and pace, but I lack the volume I’ve had before. With less data to guide me I turned to another source of information – the disastrous race of 2009, when an abscess kept me out of the saddle leading to a 6:18 bike and a 4:30 run. I am confident that being able to sit and pedal for the entire 180km course will see me circuit the island faster than that; and last season assures me I can run a better marathon. It remains unknown what will happen when I combine those two and throw in a swim, but I’ve dragged myself through enough tough days to get the job done.

Race day remains a mystery. But I can put the spectre of a nightmare day to the back of my mind. I am less prepared than at previous races, but there’s been sufficient work to get me to the finish time in a respectable time.