The markers were a curse, damning me to another kilometre at a precise 7.1% average gradient with three more to follow before any sign of reprieve. By now I was reduced to two gears – the slow, rhythmical churn of the 24 cog or occasional moments of freewheeling before sense returned and I realised I was merely prolonging the summit and more importantly lunch. I wondered if, perhaps, the trip had killed me and I was in my own, personal hell: dead legs, an endless climb shrouded in thick mist, doomed to see the same sign over and over. Four kilometres later the summit and Steven emerged from the fog. I was still alive.

The day had started comfortably – we revived our tired legs cruising down to Luchon, then tested them on the ascent of the Peyresourde. Steven had jumped away early, once again out of the saddle, while I span my climb-friendly gearing. I made steady progress, sticking to that rhythmic turning of the gear, enjoying brief reprieves as the gradient eased through villages. My legs ached, I could feel the Port de Bales and the Portillon still in them, but I was climbing. As each kilometre passed, I grew more confident that while it may not be fast I could get up anything.

But halfway up the second climb, the Horquette d’Ancizan, that positive mood had eroded. I could feel the Port de Bales and the Portillon and now the Peyresourde in my legs, and I could see that sign telling me I had four more kilometres to go. Only the thought of lunch, finally some food, kept me going as I weaved my way around fat slugs drawn out onto the damp roads. So when I reached Steven at the top a blind, misty descent didn’t bother me because I knew I was freewheeling to that lunch.

Except midway there was a climb. A kilometre of noticeable gradient that I had not signed up to before I’d started the descent. Nothing was going to stand between me and a plate of frites, I churned a bigger gear, out of the saddle, anything to get to the cafe sooner. Down further, mist cleared so I could finally see the road ahead and more importantly the placid cows that roamed freely across it, then, past them and their mud and excrement, and the roads opened to a fine, fast finish. Most importantly – a finish. 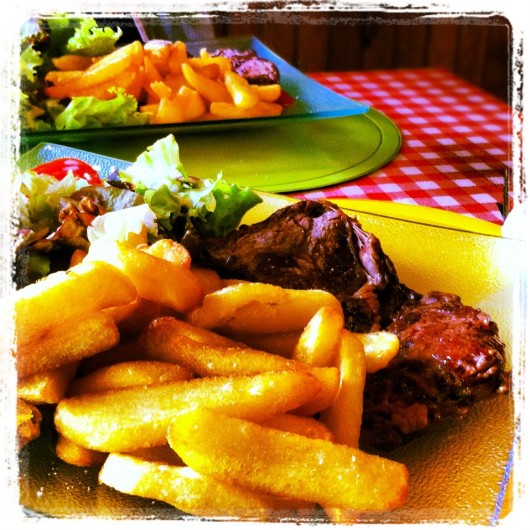 Rest. A cafe has rarely been so welcome. Five hours since I’d last eaten I needed something substantial – entrecôte avec frites. Five minutes later a large plate with a slab of barely cooked beef – possibly one of the cows we’d passed on the way down – and an ample portion of chips arrived. It didn’t last long. I paused to take a picture, noting there was a risk this would start to look like a food blog, then devoured the lot. We discussed how pleasant it is to take a lunch stop during a long ride as we sipped black coffees and allowed the steaks to digest.

They didn’t. Not right then. I climbed the five kilometres back over the Col d’Aspin with a lump of steak resting in my stomach. It accompanied me down the other side, but eventually, on reaching Arreau I could confidently say the meal had gone and with it my legs had perked up.

All that remained was forty kilometres back to base. Forty kilometres, a headwind and a rolling road. Steven and I tackled the first stretch as we had the previous day’s return trip from Luchon: two-up time trialling straight into the wind; until, with much relief, we could turn off. It had broken the – tedious – back of the journey home. We agreed to take things easier, before ramping up the pace again and churning a big gear over repeated rises. Legs were tired, it was uncomfortable, but we both wanted this done.

There has been dark moments on the ride. The Horquette had made me suffer, but then so have many climbs before it. I had been more controlled and I had managed the climbing and while I may not be at my fittest I could still haul myself up a mountain. Perhaps Iron Camp wouldn’t kill me.