☰
Home > Tack on and snowed off

Tack on and snowed off 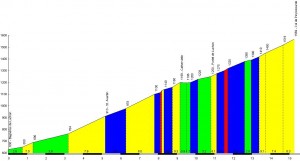 So my mini-training camp is done, just the flight home tomorrow morning. Bike is packed, kit isn’t yet, but that’s just a case of transferring the piles from the floor to the bag.

Training went pretty well, 4 big days and then 1 unplanned little day. I managed not to crash this time, though I did start the weekend by slipping on some stairs and bruising my arm! My descending has improved, which isn’t saying much.

I logged over 500km in around 21 hours of cycling despite the last day being cut short. I also ran about 40km in just over 3 hours. A pretty solid effort for 5 days, though I would have liked to have got in a bit more. To be honest I wimped out when bad weather meant indoor training on day 5!

Arrived, built bike and then off for a short ride to start out. Opted for a 75k loop taking in the Col de Larrieu, the Col de Buret and the Col des Ares. I took it easy as it was my first day, but in retrospect I could have done a longer or tougher route. Weather is better than I feared and the ride is straight forward so things are looking good.

I throw in the first 10k run straight after the bike and am pleased to find I can remember the route now and don’t end up getting lost and running 18k like my first run here last year.

Started the day with a pre-breakfast run, well more of a slog as it felt far tougher than the night before. Then a long ride taking in the Col de Peyresourde and the Col d’Aspin before heading back to base and then tacking on some extra distance to get to the 6 hour mark.

Following the route map and then tacking on at the end became a standard practice of this trip. My goal was 6 hours and I spent my ride starting and stopping my timer to ensure an accurate 6 hour ride time. Perhaps a little obsessive…

Then after dinner a swim that wasn’t originally on the plan. Ian and Julie took me along to their tri club’s Friday night swim session in Tarbes. It was interestingly disorganised, but nice to get some time in a 50m pool. I bashed out a pretty rough 3.4k I think, I got quite distracted and lost count during a 400 set at least once! Pretty tired by the end of all this.

Second long ride as it looked like the weather would be getting worse in the coming days. A round trip to St Giron, going over the Ares and Buret again and then over the Col de Portet d’Aspet. The Aspet had some nasty 17% sections, fortunately very brief and then it’s a steady effort up snow lined roads to the top. The descent off the top was fantastic, a few tricky hairpins to start which I tackle awkwardly, but I remain on the road so it’s all good. Then it’s just long sweeping roads and high speeds. The compact cranks that make it easier to spin up the hills suddenly becomes a frustration as I lack the gears to pick up more speed.

The return journey is just rolling terrain and mostly distinguished itself by being wet and frustrating. Despite this and despite not being entirely focussed, once I arrive back at base I have to tack on to get that 6 hour mark again. This basically involves getting thoroughly soaked through. No doubt it’s obsessive this time…

I was so damp and cold I can’t face running outside and end up using a treadmill in the bike barn after dinner. It was set to an incline, but the number obsession means I set the pace to the same as an easy run on the flat and suffer for 50 minutes!

My original plan before heading out was a short ride to start off, a couple of big rides and a couple of medium rides. To be honest I felt I could do another 6 hour ride, but with poor weather promised I stuck to the medium distance plan. The route this time went out to the west taking in just the Col de Coupe (so minor I can’t find a good website).

It’s a pretty easy route, the climb isn’t particularly tough and when the sun is out I reckon it’d be a great ride. In fact I did enjoy the bits when the sun was out, they were just brief and came at a time when I was a bit distracted by how cold my hands had got. The weather was largely as promised, flurries of snow and strong winds. My layering system did the job though and once I figured out that using the cheap woollen gloves under the big winter gloves would keep my hands just a bit warmer my mood improved.

Despite the suffering when I approached home with 35 minutes till 4 hours it was time for more tack on. By then I was fine with the light snow and besides, it’s all about the numbers.

After a couple of hours relaxing I notice it’s actually quite nice so that saves me from the treadmill. Somehow I go from having dead legs at the start of the run to turning in a slightly faster time for the 10k than day 1?

Extensive checking of a number of different weather sites had done nothing to improve the outlook. Another cold and wet day, but I figured after yesterday this would be fine. The plan was to head down to Luchon and over the Col du Portillon, into Spain, back into France and then if I’m feeling good (and I intended to be) over the Col de Mente for a bit of tack on.

I set off in miserably wet and cold weather and as I head to Luchon things rapidly get worse, rain becomes snow, snow becomes a blizzard (ok not quite). Ice is settling on my sunglasses and the road is covered with slush. My back-up plan is to turn around at Luchon, but 5k out and it just seems silly. I stop and watch 2 snow ploughs clear the other lane of sludge, its obvious that I should take advantage of the clear road. So it’s straight back home a hard effort as my hands are pretty frozen now despite the cunning woollen glove/winter glove combo. I get back and spend 15 minutes warming the hands back up, though even now the finger tips are a little numb.

To put to rest any questions about the severity of the weather the ski slopes at Luchon were closed due to the winds and snow. It’s got to be bad if snow stops skiing! However whilst that’s a valid excuse I have none for the fact that I postponed a session on the rollers for the comfort of a warm living room. As it got later there seemed less point and in the end it just made more sense to pack the bike.

In conclusion, the obsessive, hours-fixated athlete in me feels bad that the last day didn’t keep the numbers up. On the other hand it was a good weekend’s training all things considered and the weather was out of my frozen hands. I’m pleased to find my recovery is better and I can ride several long days in a row. I do need to get a bit more mental focus on rolling terrain or in blustery conditions to keep a better power output going. I think it points to me being a stronger cyclist than this time last year, well I hope it does anyway!