☰
Home > No More King of the Mountain

No More King of the Mountain

There are two purposes to a shake-down ride on the first day of a camp – firstly to ensure that everyone’s freshly assembled bikes are all in one piece, but also so we can put out some max efforts before the serious riding begins. An unspoken – except when Ian tells the others I hold the Strava KOM for a climb – competition exists that drives each of us up short hills in big gears. Once we’d all proven we were capable of hammering climbs when fresh (most of us), and created sufficient doubts about our relative fitness the camp could settle down. 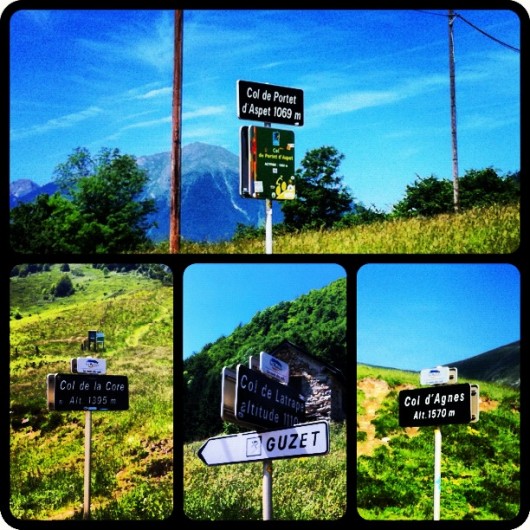 Not that it did. The profile of day two should suggest careful pacing over five successive cols, but our portion of La Route Des Cols went as follows: Portet d’Aspet, short and steep, over quickly; Cols de la Core, gradual, longer, pleasant; Col de Latrape, steeper, hotter and fortunately shorter; Col d’Agnes, hot and hard, the point where I died; Port de Lers, an unpleasant bump following the Agnes. With King of the Mountains points available there was no easing up, I soon established that I lacked the fitness to be any competition on this front; the difference a year makes, particularly when that year has been lighter in training.

I bonked. A rookie error, timed to perfection on the Agnes. Ten kilometres averaging over 8% is no place to be low on energy; I resorted to the 28 cog on my hire bike to slowly survive the ascent. A firm last on that KOM. At least the final forty kilometres were mainly downhill. I’d loaded up on sugar that took most of the descent to kick in, had it not been for another camper, Nick, it would have been a long journey to the hotel.

Roasted in the heat. Tired from the ride. I enjoyed the first of several ice-cold beers with the group. I reflected, assisted by the alcohol, that while my bike fitness was clearly not in the league of previous years, the day had been tough – no one had had it easy. All I could do was hope for more sleep and fresher legs for day three.

Alcohol doesn’t rank highly on any list of recovery drinks, but I have to give it credit for some superb night’s sleep: after Ironman Lanzarote I had eight hours assisted by wine, and a couple of extra beers with Steven that evening ensured I was again out for a full eight. I wouldn’t claim that I woke with new legs, but at least I could tackle the hotel’s stairs with some semblance of style. Breakfast was lighter, a very French affair, involving pastry, bread, jam and coffee – it would do.

Day three, today, was an easier route back to Pyrenees Multisport, three Cols surrounded by long drags – more my style. From the hotel door we were climbing, straight onto the Col de Port, gradual in comparison to much of the day before, and with no KOM points on offer I had no intention of working too hard. I accompanied Lance as he worked his way through disco classics of his youth – literally D.I.S.C.O. – but preferable to the previous days discussion on English football. Then with the summit and Grant in sight he made an attack; I stuck resolutely to my steady pace, I didn’t have anything more. 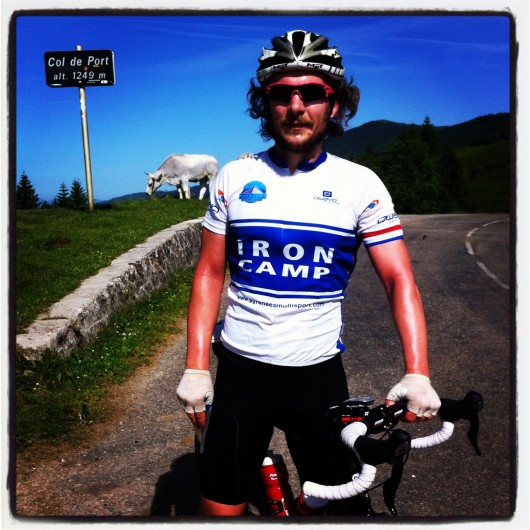 One Col down in under two hours. What followed was 45km of downhill – speed, dark tunnels and a little bit of time trialling. I enjoyed it, my legs were reviving. Lunch completed the resurrection, once the food had settled I felt good, moved to the front and kept the pace high on my favourite section back to the Portet d’Aspet. We stuck together until 15km to go when Lance, back in third, cries out, “go faster”. I pick up the pace, but Steven flies through and creates a gap. I push harder. Lance is on my wheel and he promises that if I pull him back to Steven he’ll stop the singing. I dig myself a hole, working hard to slowly bridge that gap until 10km out I am close and tell Lance to make the jump. My job as domestique is done. Lance better do well on the climb after I buried myself for 5K.

I like the Portet d’Aspet. I like it more when I’m feeling good. The sun was out, my legs seemed to be working – perhaps aided by a double espresso at lunch – and I could hold on for third on this KOM. Lance managed second just behind Steven – I’d allow him that.

The back of the ride broken, we descended to the Col des Ares, a gentle finish to the day; except when you spin your legs up and push the climb just a little too much – we’ll be time trialling it at the end of the week, but it felt like I put the effort in today, all for a good 2 minutes off my personal best. A final regroup and we rolled home. I could take some satisfaction that my legs held up better than the day before, even if I opted not to run off the bike; they weren’t that good.

Four more days and there’s harder riding ahead. Day six in particular will be a monster as we replicate this years 200km l’Etape du Tour. If I can pace myself through the next couple of days and not replicate day two’s detonation I may still survive.