☰
Home > From Couch to Marathon

From Couch to Marathon

So much for no longer playing catch up. I’d returned to cold, grey England buoyed up at the prospect of devoting some solid time to work and ‘getting ahead’, a vague term for working on a few of the projects that have remained firmly on the sidelines while I played at Ironman training. Life however had different plans and within twenty-four hours it was clear I would be continuing to play catch up for another week. It’s as if the moment I decided to free up more time for my work the universe decided to free up more work for my time. Still I’m optimistic that another week will see me finally catch up and have a moment to breathe.

While I’ve yet to fully realise the benefits on a professional level, the emotional gains from my decision to temporarily retire from Ironman have been manyfold. The burden is gone. I feel no sense of obligation to train and none of the guilt from failing to meet this supposed obligation. I am left without doubt as to the correctness of my decision.

But where now? Training has been the common theme holding together my life – and this blog – for a number of years. Last night, I sat on the sofa, watching TV and eating a bag of crisps; it amused me to think that within a week of quitting Ironman I had devolved into a regular couch potato. It would be easy – dangerously easy – to become carried away by the excitement of not needing to train to the point of never bothering to train. That was never the intention and thankfully there are no more crisps in the house.

There is one event on the horizon: the Brighton Marathon, nine months from now. Sufficient time to rebuild a broken run without interruption. Sufficient time, I hope, to mount an attempt on bettering my marathon best of 2:50. My biggest challenge is in my head: I lack confidence, I am afraid, each time I run I wonder if I’ll be up to it. I have memories of a period when I was capable of endless miles, when I ran eighty, ninety, one hundred miles in a week; they seem distant now, but those memories represent where I need to be.

I’ve allowed myself till August, do what I want, then on the first I start to run again. Slowly. Speed and distance gradually progressed, time on feet built up. Until the end of September, when I hope to be ready to progress. October and November: I’ll push for mileage, develop the volume and prepare for a transition in December towards greater structure, mostly hill work, but not too much yet. February and March: will see the greatest focus, more time on the track; then taper and race in April. My copy of Lydiard’s Running to the Top.

has come off the shelf to help guide me.

For now I’ll do as I feel, possibly eat too much, probably drink too much, definitely catch up on my workload and make headway on new projects. I am enjoying this new found sense of freedom.

What Place for the Marathon in Ironman Training? 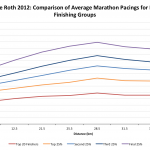 Ironman and Marathon – See How They Run