It took about thirty seconds to decide these were shoes I could comfortably run in. Thirty seconds on a treadmill, in rolled up jeans, at a modest pace. Yet I was willing to say that I liked the Mizuno Wave Precision trainers. It seemed strange that I might allow such an artificial experience to influence my choice of shoe for hours of running on less forgiving pavement, but that seems to be how the process is done. If anything testing a new shoe was a novelty, last seen when I switched to K-Swiss Blades a few days prior to Kona, since then it’s all been via the Internet – stick with the brand, pick something neutral, light, a little cushioning and, ideally, cheap. But I wasn’t there to find new shoes. 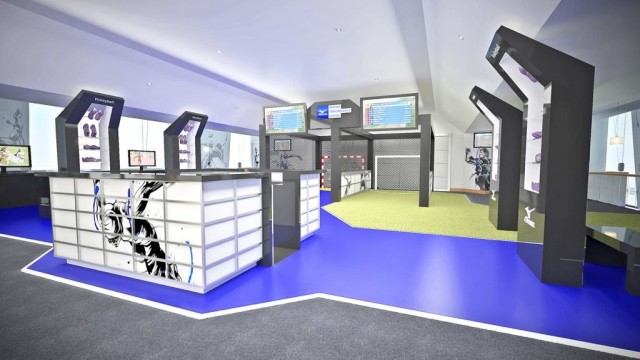 I’d been invited to the press day at the Mizuno Performance Centre in London, a small, pop-up demo centre for their Seiei line of products, and while I felt I stretched – to breaking point – the definition of press, it was free. Cheapness again. So on Monday morning I boarded a train, one I probably spent many hours unhappily commuting on, and made an all too familiar trip into London. Arriving at the venue, hidden among offices at the far end of Oxford Street, it proved to be a low key affair; a handful of bloggers and one or two real journalists easily identified by their professional approach – checking emails on their phones during the opening art work and iPads in hand throughout. I felt decidedly out of place.

The demo started with three rapid paintings by the artist Hidekichi Shigemoto. Talented, but unfortunately reduced in my mind to a Japanese Rolf Harris by a comment from one of my neighbours, a discredit to his stylised brushwork. And then, after a brief, guided history of Mizuno we moved on to the shoes, something I might have some interest in, at least once we got past the football boots and handball trainers (a sport I’m barely aware of).

The Seiei line is Mizuno’s elite range, lightweight and as we were frequently reminded designed for elite performers. Also expensive. For the most part these were shoes for racing, not training, not least because in their purple and yellow colours and limited production they were far from cheap. There’s sufficient cross over between this new line and their existing range that the market seems limited. They’re more of an exercise in marketing, and they will get noticed.

Finally we were let loose on the rest of the centre. Its major attraction is the chance to try out the shoes – testing yourself off the blocks on the 20 metre sprint track, scoring goals in football and handball or, if like me you’re not dressed for those sports and fear embarrassing yourself at the slightest requirement for coordination, having yourself fitted in some Mizuno trainers.

There are two tools for the fitting: a foot scanner for biomechanical assessment and a treadmill. The assessment is no different to those available in good running stores and given I was confident that I want a light, neutral trainer we went straight to the treadmill. Which is where I ended up liking the Mizuno Wave Precision and considering how, in reality, this limited test told me very little. I’ve owned my share of shoes that initially felt great only to become relegated to the back of the cupboard after sustained mileage. I would, possibly, try a pair – I like new trainers – but my willingness to commit is highly price dependent.

I left a little unsure about the whole experience. I had learnt more about Mizuno, to be expected, but not something I’d particularly set out to achieve. I’d seen a range of shoes built for Olympians, but available to anyone at a price. I’d identified a model that seemed to suit me, not part of the new Seiei range. Perhaps I’ll try them. And I’d had a chance to play a few little games which were distracting, but not enough to draw me to the Centre. It’s somewhere you might pop-in, if you happened to be passing and has a few minutes to kill and a few friends to compete against. Had I not been invited it’s unlikely I’d go.

A day out, and I had enjoyed walking along the South Bank in the sun; there are some things I miss in London. But overall, a convoluted way to discover a brand and model of trainer.