☰
Home > Ironman Analysis > More Than One Way to Race an Ironman

More Than One Way to Race an Ironman

There is no template for successful racing. I’ll accept there are common themes, but point to the need for a strategy that accounts for an athlete’s strengths, weaknesses and fitness. Consider the recent pair of race analyses, one successful, one falling short of the goal, compare them side-by-side and other than absolute power and speed there is little to distinguish them until the latter part of the run. In fact in the case of Nick, my athlete, the pacing strategy was more conservative and while the result was a new best time, it wasn’t quite what we had hoped for. As interesting as these analyses are, we’re not looking to simply reproduce them when we race, but to learn and improve our own individual strategies.

In that light I’m going to examine another race: Paul Burton’s 9:51 at Challenge Roth 2012. Here we see a cautious strategy that plays out successfully to the end. Where Paul’s race differs from recent examples is the control he shows early in bike and run – he takes time to reach his planned race pace, then holds it consistently throughout the day. The other thing to note is how little he crosses above his FTP, or even 85% of his FTP. This is a fine example of very controlled racing. 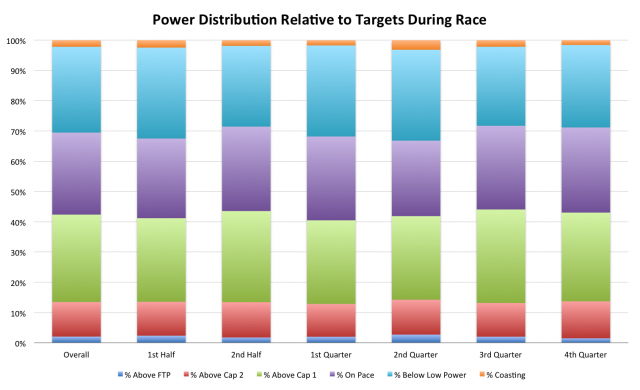 The jagged trace of power data can mask pacing errors; dividing the race into quarters and looking at the distribution of power within each can highlight the degree to which an athlete is inappropriately pacing their day. Paul isn’t. Remarkably little time is spent over FTP, it’s rare I see charts so cleanly distributed around the standard target – around 68-75% of his FTP. In many respects it is easier to maintain target when it represents a lower percentage of your FTP, the biggest challenge is one of discipline, of not pushing harder when you – perhaps – feel strong. 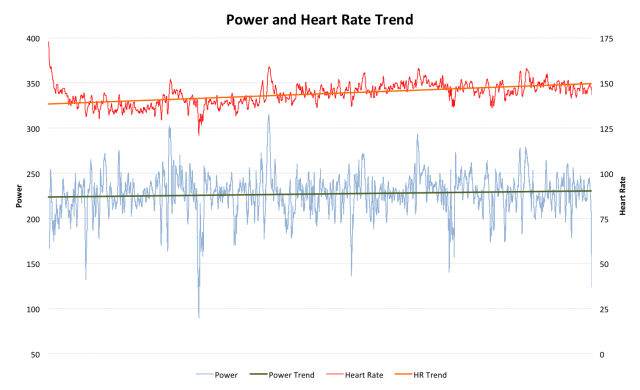 Slowly, over the course of five hours, Paul’s heart rate creeps up by 10 beats. Cardiac drift, the body’s response to sustaining and very slightly increasing power output during the ride. This small upwards drift is a good indication of the success with which he brought his heart rate under control out of transition and how he worked close to, but within the bounds of his fitness. It’s tempting to look at the trace and speculate where he might have gained a few extra watts, it’s marginal and he might easily have crossed a line. This is the sort of day that should build confidence – knowing you can pace well and sustain a certain wattage, gives something firm to build upon. 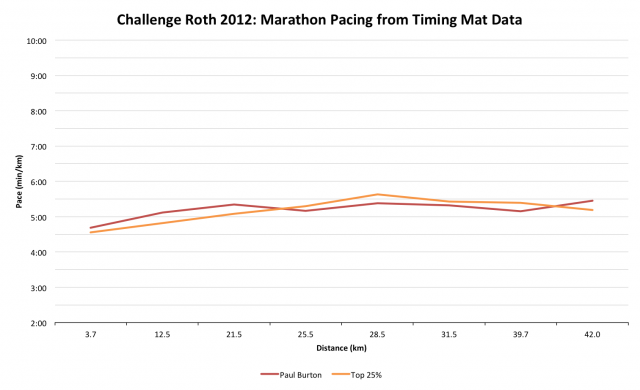 I’ve managed entirely without swim data – a respectable 57 minutes – and for the run I’m resorting to the timing mats. For comparison I’ve included the average run pacing for the top 25% of finishers alongside Paul’s splits, they are not hugely dissimilar. Compared to Roger’s slow attrition of speed, he maintains a far more consistent effort for the bulk of the race; starting a little too fast – as we all do – but bringing this under control by the end of the first quarter and only showing signs of fatigue in the final kilometres. Again a sign of a well paced race, had we heart rate data, I would expect a similar trend to the bike.

As well as kindly offering me his race data, Paul also supplied a breakdown of his training hours over the last season. There’s a potentially interesting comparison to be made between my athlete, Nick, and Paul in terms of training hours. It’s a crude measurement of training, but given Paul had the kind of run Nick was hoping for, it would also be interesting to compare their respective trainings to help address that question of whether Nick simply needs more time to train.

The natural question after a well executed race is: where next? Moving beyond a good performance can be far harder than progressing from an error prone race. Paul doesn’t need to fix, he needs to build. There’s an obvious option: develop the bike, try to improve FTP and in particular develop the percentage of FTP that can be sustain through a race. It’s one of the differentiating factors in Roger’s performances, his FTP is comparable with Paul’s (and I suspect similar W/Kg), but he has the experience, training and confidence to race closer to the 80% of FTP mark, significantly harder. I suspect a lot of that confidence comes from having such a strong run, which leads me to feel developing Paul’s running would serve him well, allowing better utilisation of his cycling strength. He had hoped to run faster than an even split 3:37, given the control in his pacing, like Nick, he would probably benefit from a run focus to achieve this.

Any answer that effectively says get fitter addresses Paul’s needs and from his descriptions of training his coach is already on top of it all. As the off season arrives it’s being able to identify the weaknesses or just the areas with the most potential to yield returns that’s important in planning the winter months. For my athlete, Nick, that may mean an increased run focus, although he intends to return to short course racing for a while. For others it may mean swim, bike or run; the answers are probably in their recent race results.