Back to Tenby again and following on from yesterday’s analysis of Ben’s performance I’ve three more power files to consider and compare. Paul Burton has again kindly provided his data, finishing in 10:09; Alan Ward has sent over his power for an 11:31; finally one of my athletes, Nick Burdett, provided data from his DNF after a crash effectively removed him from the race. a spread of performances which might help consider one of the areas I was interested in – how consistently the Ironman Wales course can be ridden. 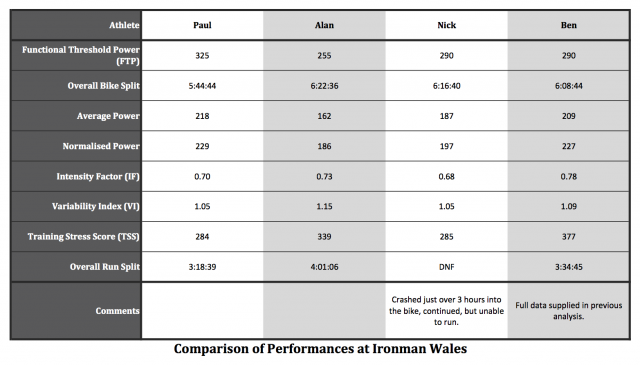 I’ll begin with the above comparison of top level statistics from this race. We have already reviewed Ben’s performance, but I’ve provided his numbers for comparison and we should also bear in mind that the crash significantly impacted on Nick’s performance from that point on (to the point of getting no further than 100m out of T2). The main focus today is Paul and Alan’s performances particularly given Paul demonstrates a much more consistent ride (as interpreted from a lower Variability Index) while Alan has an unusually high VI for an Ironman race. Both were happy overall with their run, but we will discuss that later.

Every single athlete’s Intensity Factor (IF) is within the bounds of Ironman racing, although Ben is pushing at the high end of relative performance and Nick is brought down by the second half of his ride (prior to that IF for the first 3 hours was 0.71). On that number alone I would probably be satisfied with the race, but of course it hides a lot of detail; the Variability Index (VI) begins to hint at a deeper story, Alan’s 1.15 is high, suggesting a ride with a tendency to overly push the climbs and ease off on the downhills. In fairness I’ve noted that Wales is not the easiest place to achieve lower VI in a ride, but both Paul and Nick demonstrate there’s room to get that number lower.

The other number I might consider is the overall Training Stress Score (TSS) a factoring of intensity and time which gives us a rough indication of the potential cost of this performance (which leads me to consider adding Kilojoules into the mix). I’ve never strictly held to the notion of targeting a TSS for a race, though I would agree that in all probability the higher the TSS the more significant the impact on the run; where that point lies is likely to be individual, but Ben’s 377 seems a certainty and I expect Alan’s 339 is also sufficient. The real difficulty in assessing this or any other statistic from a race file is it can’t be translated to an actual saving. Suppose Ben had ridden as a similar effort to Nick (as they have comparable FTPs), would a 10 minute slower ride for a lower TSS have resulted in a 10 minute faster run? 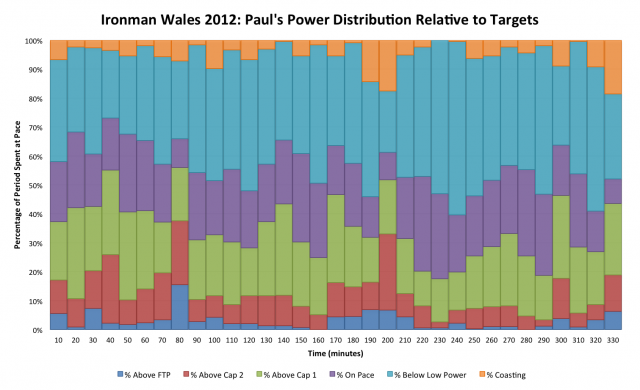 It’s worth going back to yesterday’s analysis of Ben’s data to remind yourself of the course, but more importantly to compare his detailed power distribution with Paul’s in the chart above. Paul spends a lot less time above 85% of his FTP (cap 2) and especially above his FTP, he does spend more time below 68% of FTP (low power), but with a higher threshold this likely represents a higher absolute power anyway. Paul – as have others – complained of large packs that forced him to push the pace in order to stay away from them, there are periods of notably higher effort in the data, though I’d be reluctant to view them as a significant factor in his race; eventually he sat up and let them go, sensibly accepting he couldn’t sustain it for the entire bike. Outside of those moments a strategy of spinning hills and pushing downhills and flats worked to minimise the variance in his ride. 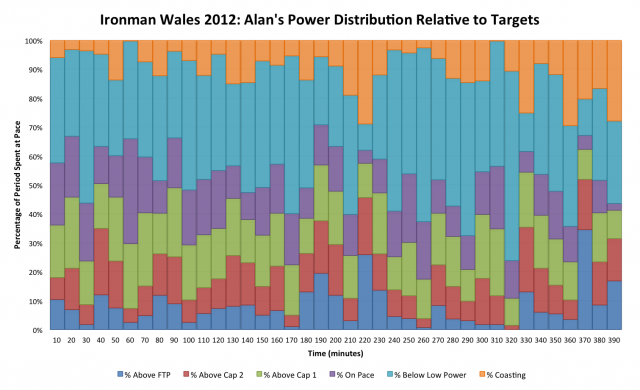 In comparison Alan spend more time above 85% of his FTP, but it is quite variable around the course, especially once he’s onto the larger of the two loops. There is a far more scattered pattern of riding across the different levels of effort than either Paul or Ben and not surprisingly we get a much higher VI than either of those two. It’s those periods where the red and dark blue bars rise up to halfway up the chart where I’d like to see Alan choose his gearing and ease off the efforts and equally those periods where the orange and light blue bars descend far down the chart I’d want to see him raise effort a little bit more. It’s hard on a hilly course, especially for a rider with a lower FTP relative to their weight, the ceiling is effectively lower, but you can use your gears and if you’re willing to slow needn’t push beyond FTP; you’ll make time back maintaining effort on the flats. I will accept that a 16% gradient does necessitate breaking those Ironman power guidelines, there are moments you’ll cross the line, we’re looking to minimise them. The balance is tricky, but there’s room for refinement in this case. 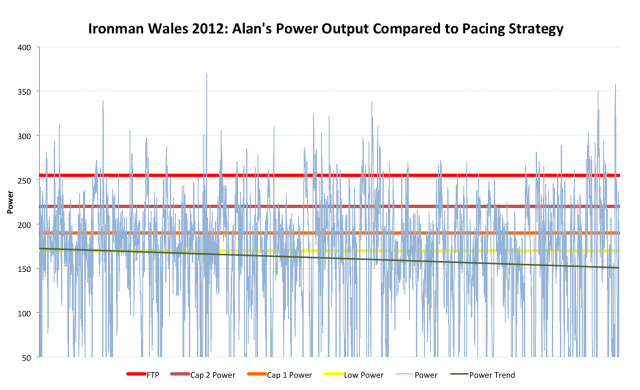 I suspect Alan’s Garmin is excluding zeros from the average power, because while the normalised power (NP) for the ride reflects his observations during the race, the average power falls lower and declines. Riding hard in the hills and easier on the flats will push NP up and similarly average power that excludes zeros. The declining trend in average power was hidden by those regular surges in Alan’s pace, potentially with a little more consistency he could have saved more for the run even if he didn’t go faster. High power efforts are costly and low power efforts are wasteful, there are more than I’d like in Alan’s ride. 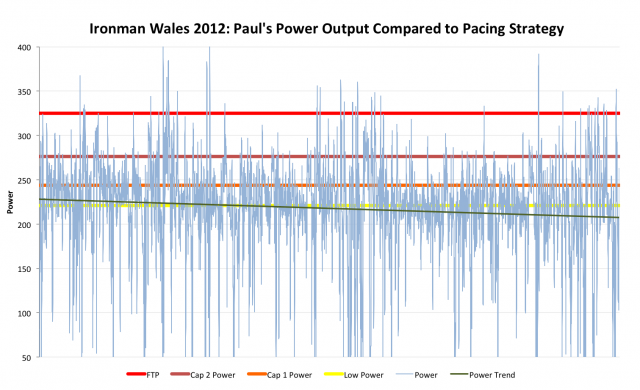 Paul’s trend is equally downward, but it’s subtly different – more compact in distribution and note the lower frequency of above FTP spikes. It’s worth noting that in any Ironman ride you see spikes over FTP and drop off in power, it happens all the time, power varies around the targets you aim for. The significant question is the degree and frequency with which these lines are crossed. Early in the day, in the presence of drafters, Paul was spiking a little too much, had he not had the sense to let them go, potentially we’d be considering a different race. 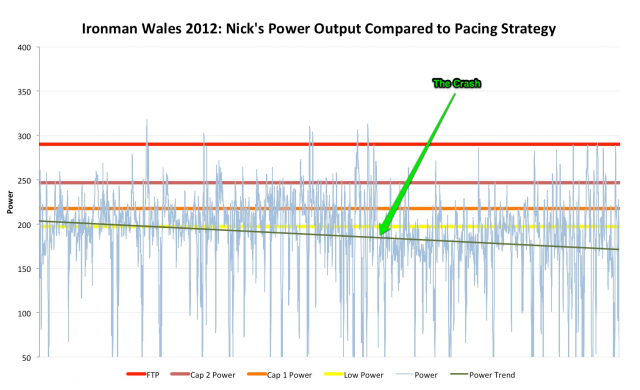 Let’s not forget Nick, familiar to this blog from my analysis of his Ironman UK performance he was hoping to construct a solid race despite the limitations to his training volume. As the chart above shows he is well controlled with VI similar or lower than Paul’s until the moment of the crash. While he was able to complete the ride it limited his power and fortunately he curtailed the run barely outside of T2; since then his leg has massively swollen in size. If we remove the second half of his race we see a consistent performance, low variability and paced within himself – these have become hallmarks of his approach to Ironman cycling. A real shame he didn’t get to test out his ability to run off the bike again.

Unfortunately – or perhaps mercifully given the length of this blog – I’m limited to two pieces of run data: the split time and some brief feedback on performance. Paul was pleased with his run performance and I’d agree it reflects well on the pacing and the consistent run work he tells me he’s been doing. There’s not really much to critique with his race, perhaps there were occasions to push more or balance power over the course of the bike, but whether they would have a relevant positive impact is hard to say. Largely, my advice would be to keep doing what he’s been doing, it seems to be working, more of the same and more experience should deliver better results.

Alan has written a report on the Plymouth Triathlon Club forum. Reading his account of the run, it’s a little less straight forward, pace varies and he suffers at certain points – it would be great to have some data for this, but there’s nothing to be done now. My inclination is there was room for a faster run with a bit more control during the bike – learning to maintain a more consistent power in the hills and spike less. Digestive issues on the run may indicate nutritional problems to consider too and complicate the analysis – it’s possible his nutrition played an equal role to his pacing, but I’d need more detail. What is clear is towards the end of the race he was very low on energy, in a similar position to Ben and there is definitely potential to address that next time.

So more data from Ironman Wales suggests that while it’s a tough hilly course it is possible to pace it within the bounds of ‘typical’ Ironman performances and potentially for the better. Paul was well within those bounds and raced well for it; yesterday Ben pushed them and suffered off the back of a lighter season of training; Alan pushed as well and held together well off the back of a bike that possibly cost him more than he thought – I think there’s room for improvement. Nick started out with all the signs of good execution and was simply unlucky on the day, his lesson is to know where the hard bends are next time. There’s always something to learn.