Seventy kilometres of the bike course was more than enough. Conditions were mild, light winds in contrast to last year’s hurricane’s tail, but at no point could I describe the Tenby course as easy. The day before Ironman Wales and I was relieved not to race. As it was I reluctantly rose when the alarm sounded at 5:45 – a lie in by competitor’s standards – on race morning. For the second time my participation would be limited to the role of spectator. Looking out over North Beach from our apartment, the day had promise: winds light, sea clam and clear skies in the distance to the east. The forecast hinted at rain, but no warnings of hurricanes. 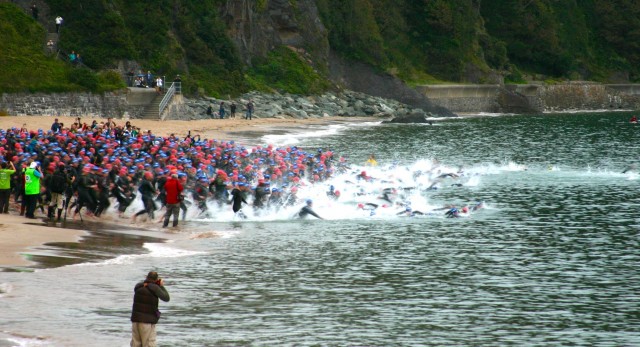 As seven approached competitors filed down the walkway to gather behind the start line on the beach; the crowd built and a minute or two before the start the pros were led forward ten metres into the water. The gun fired. Instantly a mass of age groupers sprinted into the water as the pros did their best to stay ahead of the swarm. The group soon spread – by the time the first competitor reached the beach for the short run to their second lap the field covered two thirds of the course. From that point there was a steady stream of athletes reaching the shore, dashing – or further back in the field walking – round the rocks to start the second lap. Forty-five minutes after the start Harry Wiltshire exited the swim with Dan Halksworth and began the transition across town. 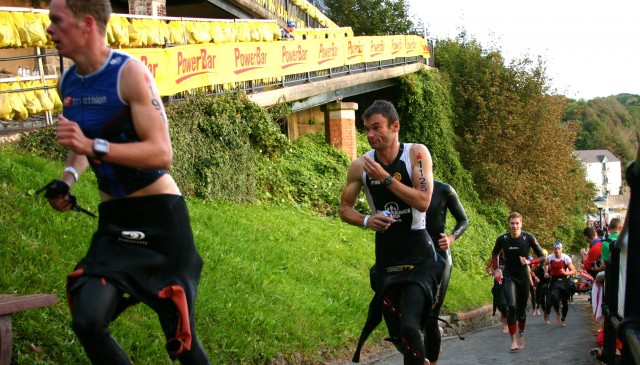 By now I’d positioned myself beside the zigzag ramp between beach and cliff top, finding a prime position to watch what must be one of the most entertaining transitions in Ironman. Tired, dazed triathletes stumble out of the sea before ascending this ramp, stripping off wetsuit and grabbing their run shoes halfway up, then they run across Tenby to complete the change into bike kit. Hard on the athletes, great for spectators. We stayed as the trickle of competitors grew into a steady flow and only as the field thinned made our move to enjoy one of the supporter’s pleasures: a decent breakfast. Back in our apartment we alternated between watching the Great North Run on television and the stragglers in the swim, wondering if they would still make the cut-off.

The large loops of the bike course made spectating options relatively limited. I was glad for the break, time to recharge batteries on camera and phone – the latter foiling any attempts to tweet updates by rarely getting a signal – before eventually heading to the edge of town to watch the cyclists heading out onto their second lap. A perfect plan to see the leaders go through town was ruined when I managed to forget the still-charging camera battery and had to dash back to the flat; I returned in time to largely fail to recognise any friends as they shot back up the hill for their second loop out of Tenby. Times were faster than the previous year as the athletes were spared the full brunt of the winds, but still the tough bike course had clearly further spread the field. Barely five hours after he left the lead athlete, French man Sylvain Rota, returned with a ten minute lead on second place. 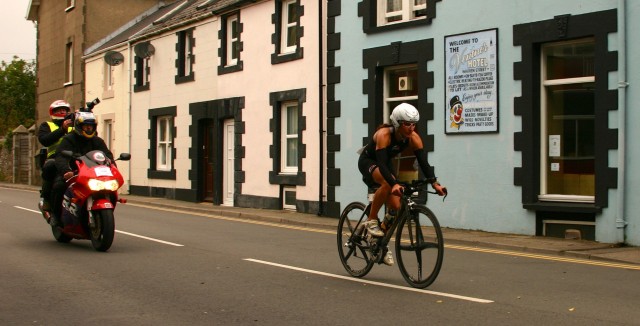 As a growing number of cyclists turned left to climb back to transition we returned to our perfectly positioned flat – views of the swim course one side and a quiet section of the run course the other – with seats lined up outside we could spectate, cheer and photograph in comfort even when traditional British drizzle moved in for the afternoon. I sat alternating between tweeting updates over a network reluctant to carry data and hit-and-miss photography as I tried to master the camera I’d not used in six years. Initially the field was thin on the ground, Rota held his commanding lead, but more impressive was the twenty minute buffer the women’s leader, Regula Rohrbach, held over second place Eimear Mullen. At running pace it was an easier task picking out those I knew, but working out where they were was harder, especially as more athletes joined the course; except for the lead men and women accompanied by bikes my only guide to performance was arm bands – four and they were almost done. 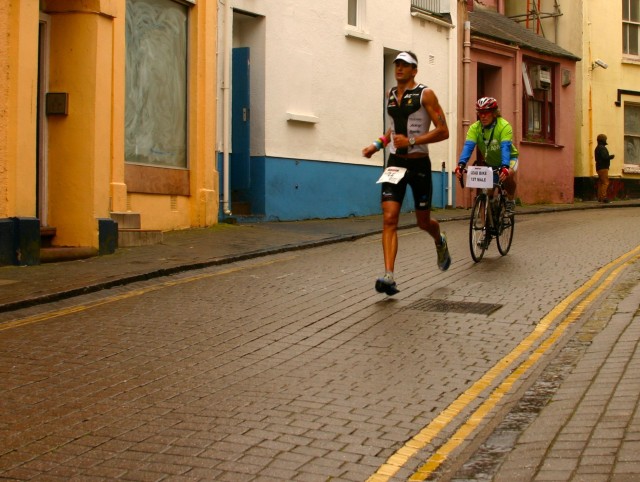 Despite another break – dinner and more battery charging – I was tired, but to round out the day we headed over to the now dark finish line. We watched and cheered as one-by-one competitors made their way down the road, as they came within sight of the bright finish chute lights pace would pick up and a look of relief or delight would cross their faces. Slowly the flow of athletes reduced as less than two hundred remained out and all were expected to finish comfortably within the cut off. We cheered more, but spectating is hard work and some time before the final finisher made their way over the line we headed home. Fun, tiring and far less stressful – I’d much preferred being on the other side of the race.