Who are Faster, Europeans or North Americans?

There is a long standing viewpoint – typically among Europeans – that Europeans are generally faster than Americans when it comes to Ironman. It’s a debate that is bound to antagonise some and often descends into discussions of course difficulties and accuracies among other things. That also makes it the sort of debate I’d normal avoid. But with all that Ironman data lying on my hard drive – and because it had been requested – it was easy enough to do a simple comparison of performance at the Ironman World Championship this year. The results are below. 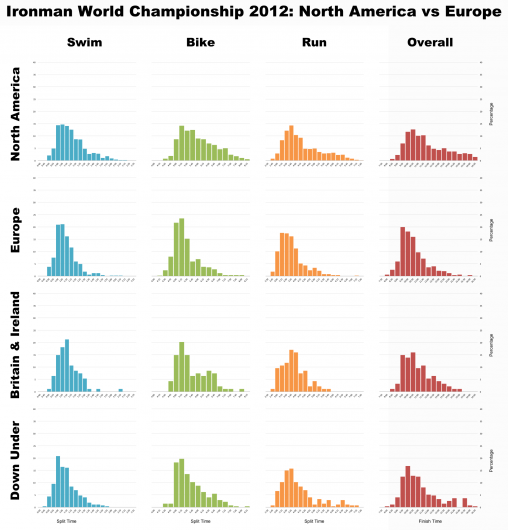 There were roughly 980 North American athletes racing in Hawaii and 510 European athletes present on the island. The chart above shows that proportionally the European field is faster, 30% of Europeans go under 10 hours in Kona, in absolute terms 147 European athletes broke the 10 hour mark compared with 96 Americans or Canadians. It looks like the Europeans are the faster group in Kona, at least this year anyway.

Showing some personal bias I added Great Britain and Ireland along with Australia and New Zealand to the mix (94 and 274 athletes respectively). Less clearly stated than Europe both these groups show similar proportionally faster athletes with the Aussies and Kiwis having a slight edge on the Brits and the Irish. I’ll apologies now to all the nations excluded from this chart, I focussed on the groups I had personal interest in and it felt dismissive to add a ‘Rest of the World’ category on the end; I am open to requests though.

The interesting question is why? 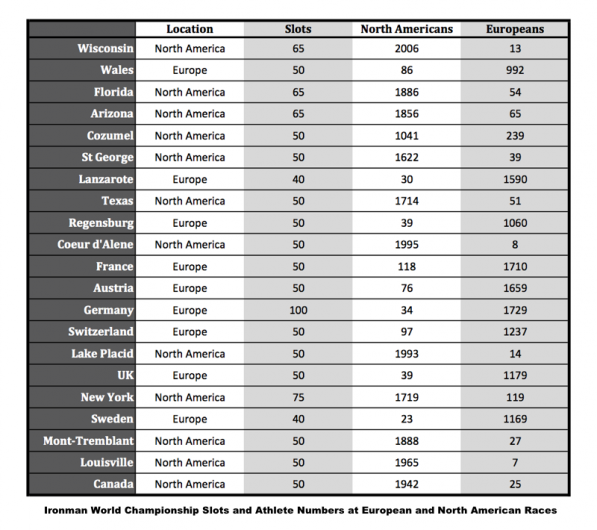 Before I speculated wildly about availability of slots I thought I’d check the numbers. The table above shows the number of 2012 Kona slots and the number of North American and European athletes at each full Ironman in those territories. I made a number of choices with the data: race regions are defined according to ironman.com, I excluded the age group winner slots at Kona itself, I excluded the handful of predominantly North american 70.3s that add over 100 slots to the pool and I excluded all races outside of the territories in question although there would be Europeans and North Americans participating. It’s an incomplete picture, but I wanted an indication as to the accessibility of slots for athletes, limiting the choice ensured I had reasonable data to hand. 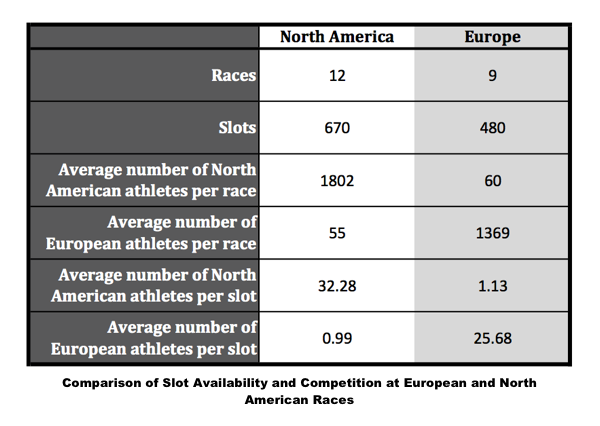 Despite total numbers suggesting greater competition for Kona slots between North Americans at their races the results in Kona – at least based on 2012 data – suggest that the standard of North American athlete qualifying tends to be slower than the standard of European athlete. Which is not to say there aren’t slow Europeans and fast North Americans, of course there are, but on average the Europeans appear to be the faster group. The distributions I’ve looked at for Ironman races over the last two years suggest a broader spread of abilities at US races than their European counterparts – the fields are wide, but perhaps not so deep. It gives a sense that potentially – I’ll stress potentially – there is a greater level of competition in Europe for the slots available than in North America and in turn this delivers a faster group of athletes to Hawaii in October.

This is, at best, a cursory examination of the situation and I do have the data to potentially pick out more. Considering relative performances of athletes by territory across a broader spectrum of races and looking to see if there was an actual and significant different in the way they perform. As it stands, to a casual glance, it does appear that the Europeans are going faster in Kona.