A more recent article about this race is available

The Ironman World Championship took place over the weekend with over 2,000 age group athletes competing in Kona. Entry by qualification ensures that the field and consequently results are fast despite windy and hot conditions. This year is no exception and results don’t look too dissimilar to previous years on the course. Age group wave starts was a new introduction in 2019, but I’ll take a closer look at that in a future post.

The distribution of finisher splits for 2019 closely match the distributions from the combined results of 2009-2018. While conditions do vary on the island their overall impact, at least at the front of the age group race, is rarely that significant. Occasionally we’ve had faster years like 2018 and 2013, but 2019 doesn’t stand out that much.

The DNF rates for Kona are always in the low to medium range. If you’ve managed to get there you tend to finish the race come what may. This year is no exception and exhibits an average level across the race. 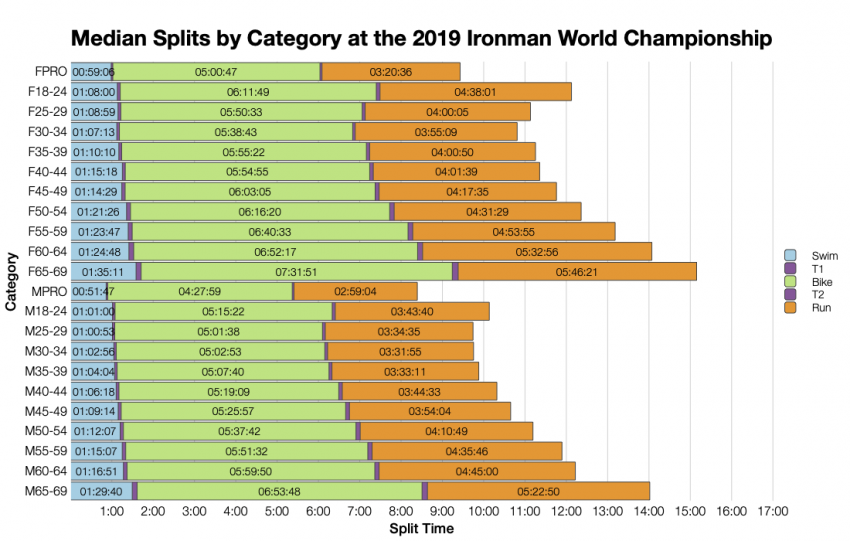 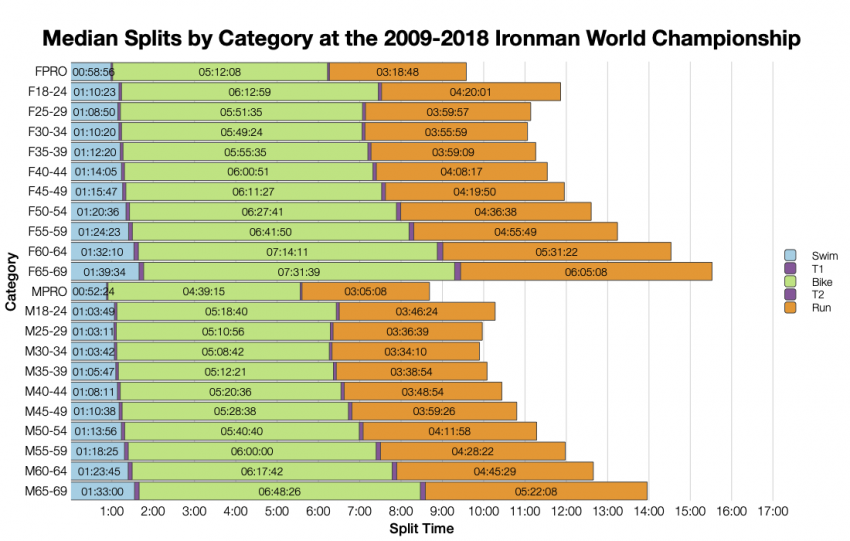 With the age group distributions looking so similar the pattern among age group medians is varied. There are no major trends on display and quite a lot of variance across age groups. Generally the differences between this year’s medians and the past is small. There’s a hint of a faster bike and run for some age groups, but this is in the order of a few minutes.

The distribution of qualifying races plays a large roll in the breakdown of nationalities racing in Kona. The US remains ahead of the others. I will be updating my demographic break down for Kona later this week. Looking at those who took first place in each age group UK athletes performed particularly well this year. 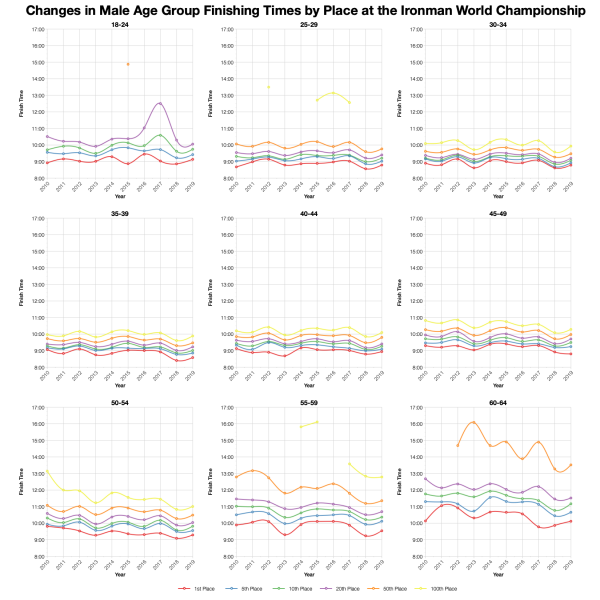 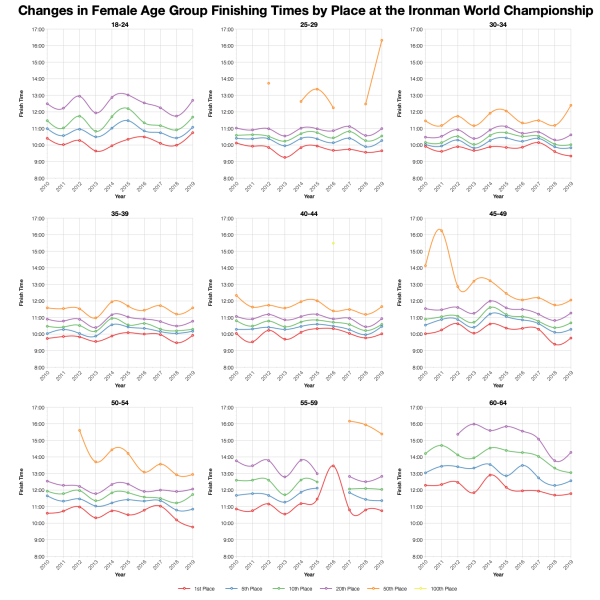 Tracking the trend in times for age group positions shows how stable performances at the front of age groups have been in Kona. There are some shifts where conditions were more noticeable, but many years show similar times. Last year was a fast one and while this year was slower, it appears to fall in the top half of race times.

As some guidance to times at this race the table above shows the winning and tenth place age group times. In the past age group winners would also receive an automatic qualifying slot for the 2020 Ironman World Championship. I have included Koan in my Kona Qualification Statistics. 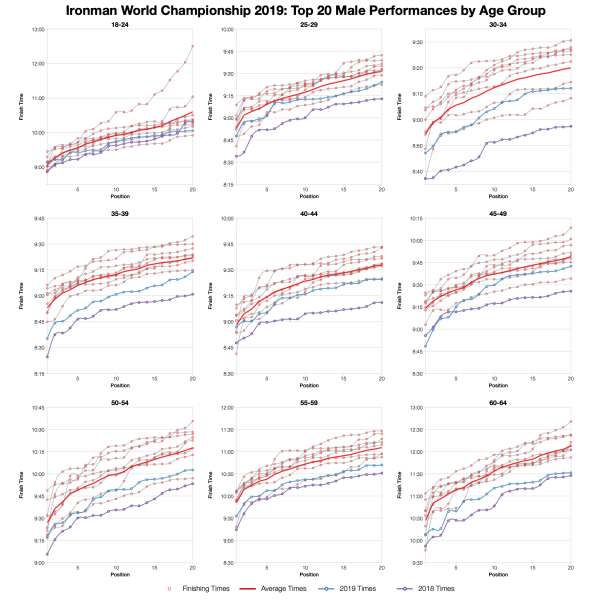 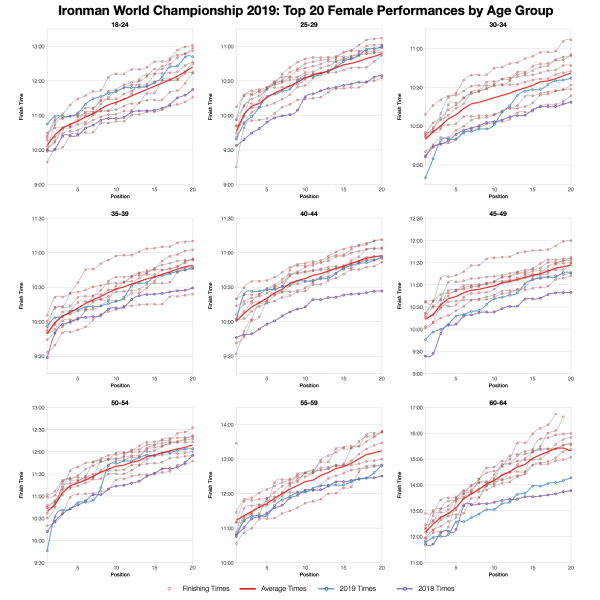 Looking at the top twenty within each age group shows a year that was faster than average for many age groups. It was not the fastest on record, 2018 claims many of those times, but 2019 lies somewhere between that and the average for the course. This is mostly for the male age groups, in the women’s field top twenty times trend closer to the averages.

Overall it looks like the 2019 Ironman World Championship might have been a little faster than average. The difference isn’t huge though and was most notable at the front of the male field. For the majority this wasn’t too far off a typical year on the course.

You can access a spreadsheet of the full results from the 2019 Ironman World Championship on my Google Drive. 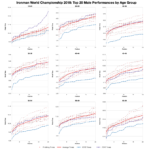