How Fast to Qualify for Kona

What time will I need to qualify for Kona? This question is on every front-of-pack athlete’s mind when they enter an Ironman. The usual process is to dig through the last couple of year’s of results, find the slowest qualifiers in your age group, check for roll downs then estimate. Prompted by yesterday’s announcement of an increase to 100 Kona slots at Ironman Germany next year I began to consider how I could use the Ironman data I have been gathering to better estimate target times.

The starting point was simple: if there are 20 slots in the male 40-44 age group – likely based on last year’s numbers – then what sort of time yields a reasonable chance of qualifying. The quick answer, once I downloaded the results for the last 10 years (except, oddly, for 2004 which is absent from the Ironman website), was to take the mean finishing time of the 20th place athlete across those races; and if you’re going to do it for one, you might as well do it for all. 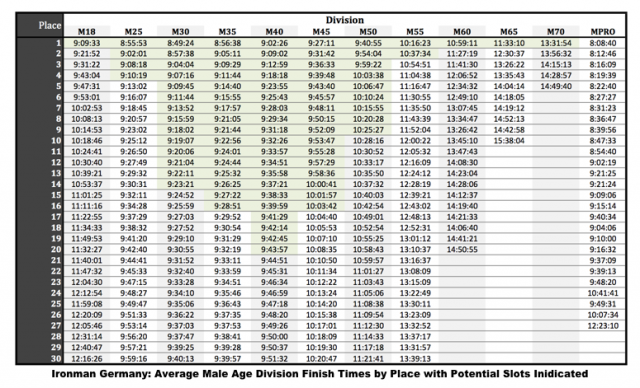 On average the 20th place male 40-44 year old finisher crosses the line in a time of 9:43:57. It’s a reasonable starting point for an estimate, if you are faster than that there’s a good chance you will be in the top 20 and in sight of a slot, but an average is the middle ground, some 20th place athletes have finished faster and some slower. How much faster, or slower, might the 20th placed athlete go next year? Standard deviation is another simple calculation to give some idea of the range of the data, for the mean to be a useful estimate we really want to see, small values; our average 20th place male at Ironman Germany has a standard deviation of 13:41, not too bad, you might be happy to conclude that a 9:30:00 Ironman would be as good as certain. 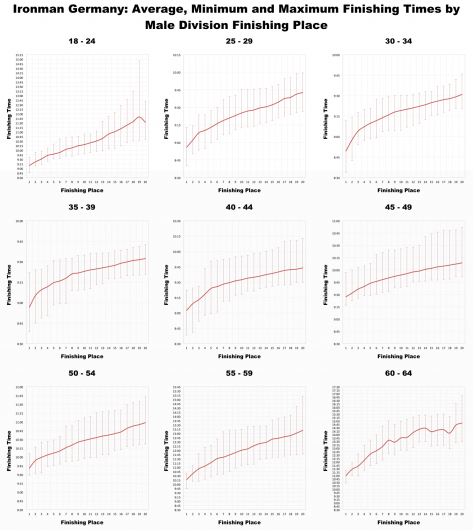 But I like charts, if nothing else they look better on the blog than tables. Another way to look at the data is to take the mean for each place and also the minimum and maximum values and plot graphs that give an indication of both average and range. The results above allow you too look at your age group and see the range of performances that have resulted in a particular place. The minimum would be a pretty safe bet, the maximum a gamble. 9:30:00 does look like a good target for those in the 40-44 age group hoping to race in Hawaii.

Naturally I produced similar charts for the women’s field, you can see the table and graphs by clicking on the thumbnails below:

Typically the proportion of women in the field is small – it can be as high as a quarter in some US races, including Hawaii, but if we use Ironman Germany 2012 as an example women made up roughly 11% of the field. As table and graph show with fewer athletes some age groups struggle to reach 20 finishers and the variability of performances for any given finishing position tends to be much wider than for the men. It is harder to make a good estimate of the requirements for a woman to qualify than for any of the male age groups that outnumber the entire women’s field. 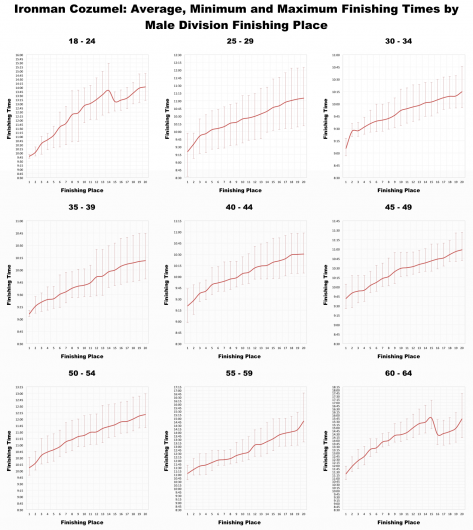 Newer races also present problems. This weekend’s Ironman Cozumel is only the fourth running of the event which means my graphs are based on averages of three data points. In many instances the range is wide too with more than an hour separating the fastest and slowest finisher for a given position in a given age group. There is a 90 minute period separating the fastest and slowest 10th place finish in the male 25-29 age group, hard to say what will be needed to enter the top 10 this year. To have confidence in any estimate we need a large enough set of races, a large enough set of athletes and consistent enough conditions that performances tend to fall within a narrow range.

Of course I also produced graphs for the women’s field and similar to Germany variability is much higher, you can see the chart by clicking on the thumbnail below: 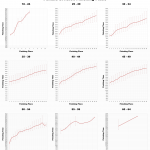 There are elements lacking. So far the simple statistics I’ve used say little about the probability associated with different times. Where do most results fall with respect to mean, minimum and maximum? Although we’re dealing in small numbers that might give us some idea how important it is we finish below the mean values in order to qualify. It’s early days, but a starting point for better assessing qualification targets.