The best test of training is racing, so for Paul Smernicki finishing 11 minutes faster at this year’s Ironman Mallorca 70.3 is a good sign that the training is working. While I helped construct the race plan I can’t take credit for his improvements having only started coaching Paul a fortnight before the race, but now that we are working together I can use the race data to help direct the next few months in the build up towards Ironman Sweden. What’s particularly interesting from this blog’s perspective though is how Paul’s performance in 2013 contrasts with that of 2012.

Behind this 11 minute difference are two entirely different race experiences. Paul rode 5 minutes faster in 2012; this was a mistake reflected in the 13 minutes slower run. These two races highlight the importance of pacing. 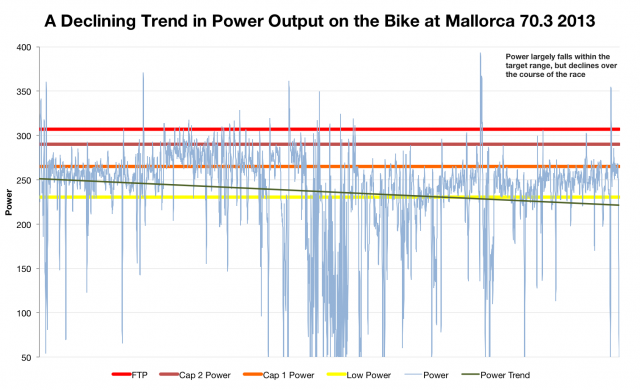 Let’s start with the power data from this year’s bike. Paul adopted two caps for race day: 265W as standard and 290W for the climbs. As the graph above shows Paul generally managed to keep his race within these boundaries. Time above FTP is minimised and while he crosses the caps on occasion they are relatively insignificant; however, there is a downward trend in power that might be indicative of a problem. 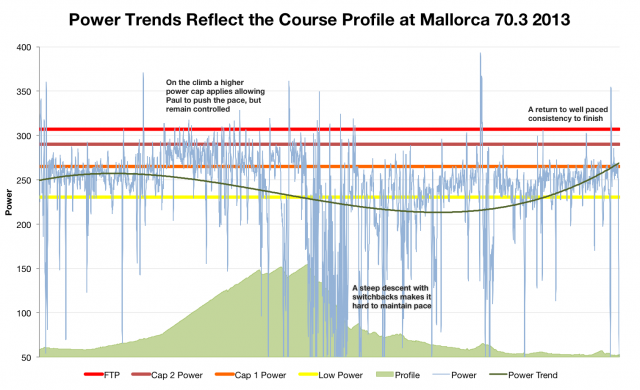 If I consider the course profile and take a less linear view of the trend it becomes clear that the steep descent midway through the ride largely causes this decline – a sharp descent with hairpins inevitably limited Paul’s ability to hit a power target. As the graph above shows once he was off the mountain Paul returned to his target power. If anything the descent offered a period of recovery between the hard climb and the sustained effort on the flat. 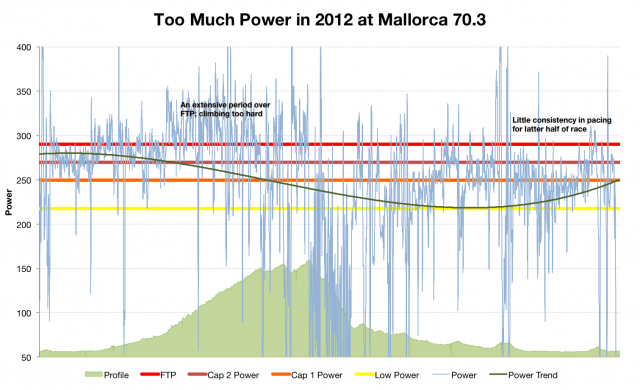 Where Paul capped his power below FTP at 290W this year, he spent most of the climb above it in 2012. I was suspicious that his FTP was set too low at the time, but even with today’s value he simply worked too hard. It was a faster bike, but came at a huge cost. By the time Paul reached T2 he was exhausted and in no position to run near his potential. 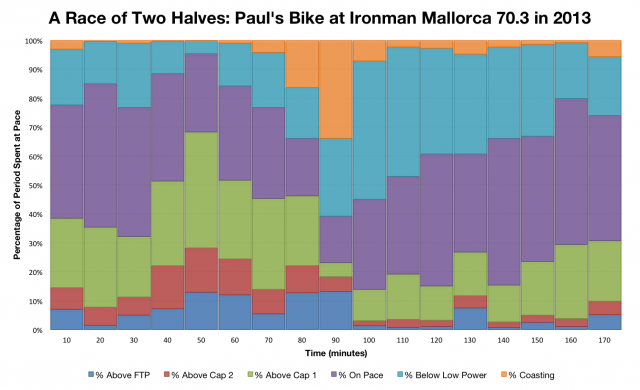 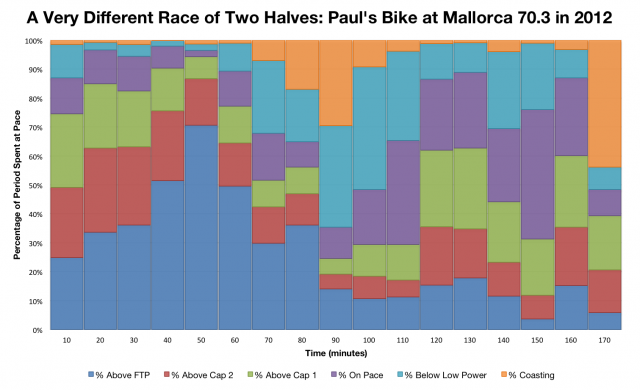 Looking at the distribution of power by race caps gives an even clearer picture of how hard Paul rode in 2012. A significant portion of the first half of the race is over his threshold. Fresh and tapered this effort may not even have felt that hard, at least not to start, but it was far beyond the scope of a 70.3 race. In contrast 2013 is controlled – Paul is mostly below his caps, riding within himself. We both agree there was some scope to push harder, but the final result speaks for itself.

Out on the run the two races diverge further. 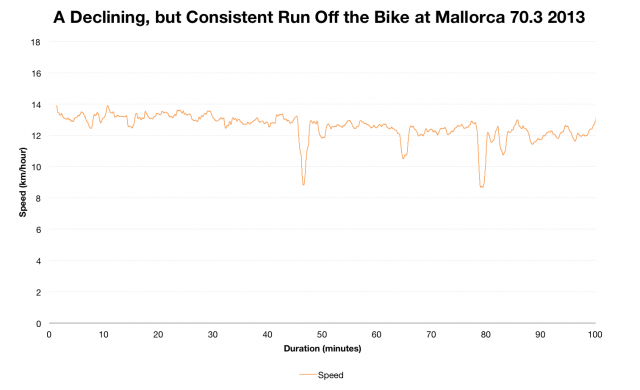 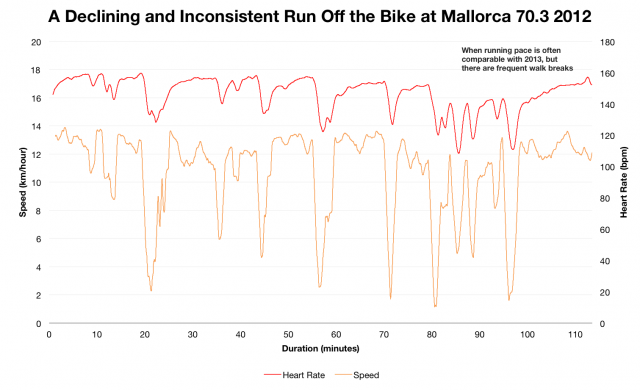 Both years Paul holds a similar pace while running, it’s just in 2012 he didn’t spend as much time running. Exhausted from the hard bike he is unable to sustain his target pace and rapidly deteriorates. Off the back of the more controlled ride of 2013 he was able to sustain a more consistent pace through to the finish; there is a decline in speed, but it’s limited in comparison with the previous year.

Two years at the same race show Paul’s progress – he learnt from his mistakes and came back better prepared. From a classic example of the high cost of pacing errors in 2012 to a carefully managed race in 2013. Managed means there was the potential for more, but this is something we can work on. This year’s race is a much stronger starting point to build from; the fundamentals are there now we can work towards applying them to Ironman.