Something slightly different today. I’m racing (or at least waiting to race) at the Outlaw Half, just for fun, the final leg of a relay team. Meanwhile…

On my first encounter with Pinterest I came to the conclusion that it offered one of two thing: inspiration to become fat or inspiration to become thin. I didn’t need either, but I’m a sucker for new networks, especially when friends suggest they’re up and coming; plus Pinterest immediately proved a great way to save online recipes (inspiration to become fat). I signed up and sporadically pinned recipes and local restaurants for future reference. So it continued until Pinterest got in touch a month back to ask if I’d join in their Pin it Forward campaign – a means to promote the platform in the UK.

As this website has grown more popular so have the number of emails and enquiries I get. Would I be interested in samples of products? Would I mention this new fitness program? Mostly I ignore them, either because they’re not relevant to good coaching or because I’ve no idea how I’d review the products on offer. I tried it with some socks once – there is only so much you can say about socks. Although I do have a couple of interesting books to review if I can make the time to read them. There is also a lot of snake oil in the world of sports performance. Pinterest isn’t snake oil so I felt I could join in, find better ways to use the platform and gain some new visitors in the process. 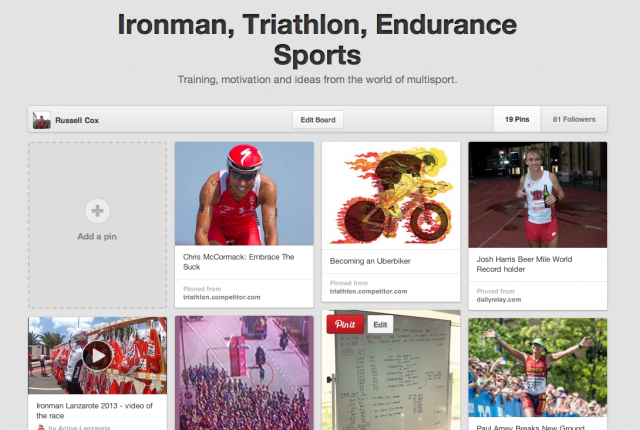 I’ve built a couple of new boards as part of the promotion. The first I’m attempting to focus broadly on endurance and multisports. It’s a work in progress. I’m trying to find the balance between informative and inspirational; I’m better at the former. The second is a nice visual way to organise my swim sessions by collecting the photos I’ve taken of each set. I want to see more aggregation of useful information alongside the inspirational on my largely food dominated home feed.

There’s a community of bloggers taking part in the Pin it Forward UK campaign, each of us linking on to another. It was unlikely there’d be another fitness blogger sharing my interests in data, but the jump from endurance training to body building at The Fit Writer is a big one. It’s fascinating to read about a sport that has an even stronger fixation with weight and appearance than triathlon! And Nicola has an impressive resume of triathlon and channel swimming behind her.