This year’s Lanzarote triathlon training camp was a huge success, enjoyed by all who attended. Athletes left more motivated and fitter than when they arrived and their results since the camp have, for the most part, been very good, but perhaps the biggest indicator of success is that they’ve all signed up for next season’s camp. When I released the dates for the 2014 camps – there will be two next year – their response was unanimous and before I announced anything publicly the second week was almost full. 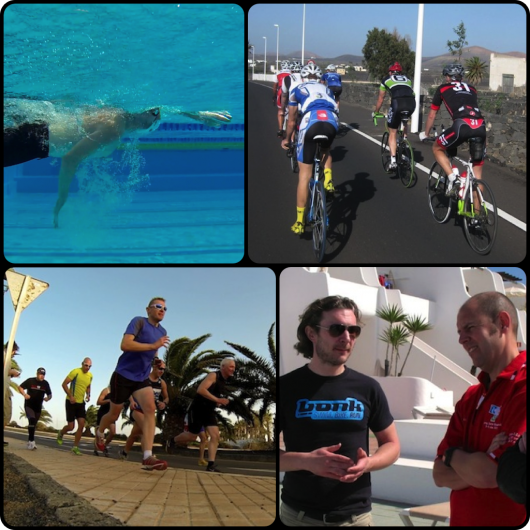 There will be two CoachCox early season triathlon training camps next year. The first from Saturday 22nd February 2014 until Saturday 1st March; the second from Saturday 1st March through to Saturday 8th March. Mark Racher will be helping with the coaching again and we will be based at the Sands Beach Resort in Costa Teguise once more. We’ll be following the same format as this year’s camp – it worked well – but routes and swim sessions will be new and there will be tweaks based on athlete feedback. One-to-one swim sessions and filming will be done early in the week so we can give feedback throughout the camp for example.

Want to know what the camps will be like? You can read about this year’s camp in the Lanzarote Training Camp section of this blog or watch some of it in this youtube playlist. You can also download the itinerary which will give a good idea of the schedule. Also check out Sands Beach Active – recommended for anyone looking for a comfortable training base in Lanzarote.

This year we have more time to prepare – a lot more time – and we’re hitting the ground running meaning we can try to do more with the camp. We had a number of great sponsors last year and we hope to build on that for 2014. One piece of feedback we received was the desire for a camp jersey – we are looking into it. Mark has sourced some great designs for a CoachCox jersey, but more will follow on that.

There are still a number of places available for week 1 (22nd February to 1st March), but only one remaining for week 2 (1st to 8th March). If you are interested or want more details, then please email me to find out more.

Camp this year was a lot of fun and also incredibly exhausting. Two weeks will be even more of the same. I can’t wait.