Some Preliminary Stats for the Ironman World Championships 2013

In a month’s time the Ironman World Championship will take place in Kona, Hawaii. There are no more opportunities to gain entry to the race, so the recently updated list of participants available on the Ironman World Championship website identifies all of this year’s competitors. Using this list I can start to examine the field that will be racing in Hawaii in October; tracing their qualifications and performances that led them to the race. This will take a little more time, but I can begin with some simple numbers and the simplest number to start with is the total: there are 2153 athletes listed to start in Kona, 1581 men and 572 women.

Unsurprisingly most of those men and women come from the US. US athletes far outnumber all others – there are more US races and more US athletes racing than from any other individual nation. We can compare the percentage of the field at Kona with the percentage of the field in all full Ironman qualifiers (lottery, legacy and 70.3 qualifiers will slightly skew this number) and see that participation in Ironman broadly correlates with numbers at Hawaii. While a few countries punch above their weight, Germany and Switzerland particularly stand out, a few fall short of their numbers, the UK doesn’t fair too well.

Access to qualification is certainly the major factor in the numbers of athletes from each country. The US has a lot of races and the fields are predominantly American which naturally means a lot of US qualifiers. In contrast European fields have a more mixed national composition and slots will typically be distributed to a broader range of countries. 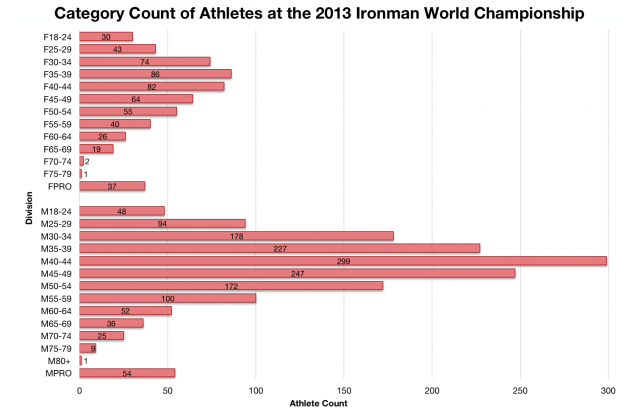 Based on the ages given in the participant list I can estimate the numbers in each age group (I’ve distinguished pros and assumed ages given are ages at end of year). The distribution shouldn’t come as a surprise – male 40 to 44 year olds are the largest category. This is true in nearly every qualifying race and Kona simply reflects the distribution of age within the sport.

This is all rather cursory and simplistic, but the list provides the opportunity for more detailed analysis. Were I not getting married this weekend and have a lot of work to finish beforehand I’d begin to dig further. As it stands it will have to wait until later this month when I’ll attempt to link athletes to their qualifying performances and perhaps produce some top rankings.