It’s a matter of hours since the Ironman World Championship finished in Kona. Handily midnight their time is closer to midday in the UK, so I can very quickly run through an analysis of the results. Kona is one of the faster Ironman races simply because it selects the majority of its competitors. The course and conditions aren’t particularly suited to fast times, but those competitors are. This year’s race looks to have fallen in line with previous results.

If you want to view a spreadsheet of all the results and splits, it’s linked at the bottom of this article.

Let’s start by comparing the distribution of finisher splits at this years race with those of the previous 10 years (aggregated into the second row of charts). These graphs exclude the Pro results so we can focus on the shape of the age group race. If you compare with other races I’ve analysed then you’ll notice how heavily skewed the Kona graphs are. This is a strong reflection of the selection process picking the fastest age group athletes.

The major difference in this year’s results, as the table above highlights, is the faster swim; roughly 20% of the age group field finished under the hour mark. That’s definitely fast for Kona, none of the years I have data for come close. Alongside this the bike and run distributions don’t vary much and the impact of a faster swim is too small to show up in the overall distribution. So other than the swim this year lines up well with the results from the last decade.

Similarly if we look at the DNF rates coming from the athlete tracker (note that the swim and overall numbers may incorporate some DNS numbers due to the way the athlete tracker lists results) they’re comparable with previous years. There’s certainly nothing exceptional in them so in that respect the race looks typical again. The low swim DNS/DNF rate for 2015 may reflect a slightly different athlete tracker listing method that excluded those who didn’t make it to the island. 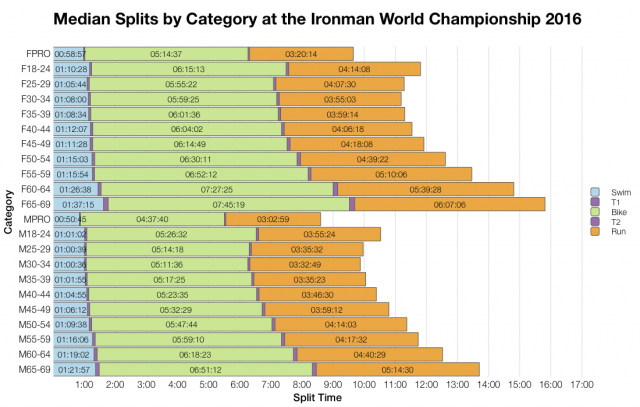 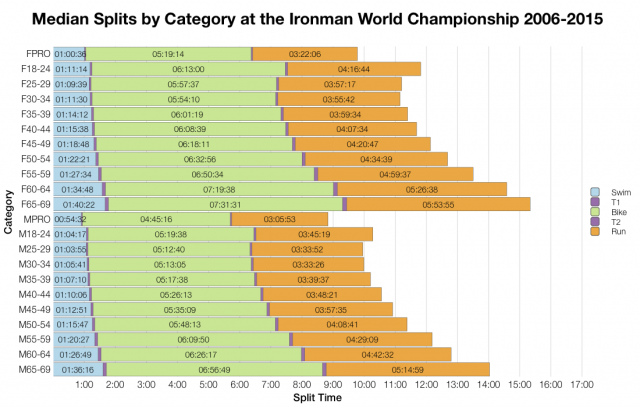 Age group median comparisons are quite simple. We see the same pattern as in the distribution – faster swim medians and very similar bike and run splits. There’s a bit more variation at the division level though. We can also see how the pro field pushed the race with a faster set of medians than the 10 year aggregate.

The table above looks at the percentage of age group winners according to their nationalty. Normally I focus this on Kona qualifier percentages, but as Kona only gives slots to age group winners it makes sense to think of it this way. There’s a good spread of winning countries with Germany topping the table.

The US remains, as it always has, the single biggest country represented at this race. While they’ve always outnumbered the others, as Ironman has expanded over the last 10 years the ratios have changed and the percentage of americans in Kona better matches the percentage racing Ironman as a whole. 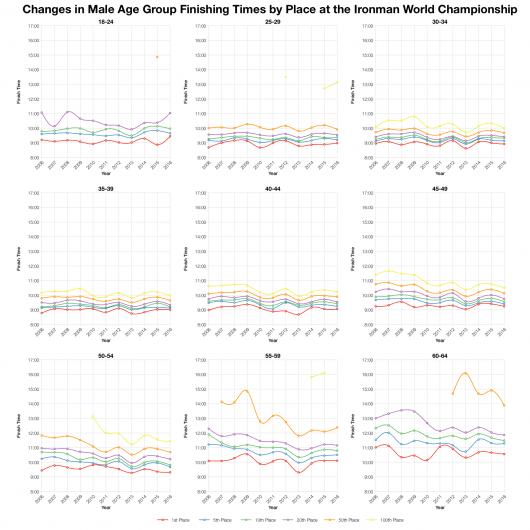 Tracking finishing times for different age group positions over the years gives an indication of any trends in performance over time. For men under 50 there doesn’t appear to be much real change in results in the last decade. However for older men and some of the female age groups there seems to be a degree of improvement in the results over the last 10 years. Certainly the gaps in times between positions appear to be narrowing.

As the age group winners are the only ones awarded Kona slots I decided to look at the time range for the top 10 in each age group in the table above. It gives some indication of what’s needed to be in with a shot of making the podium at the World Champs. Winning times and averages aren’t the fastest you’ll see in the Ironman Calendar, what makes Kona stand out is how densely packed it is with fast finish times. 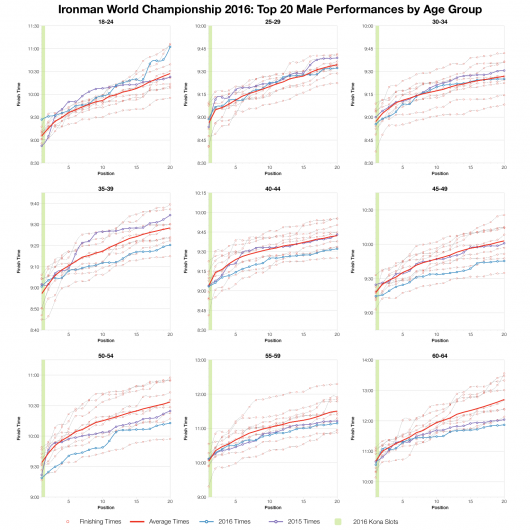 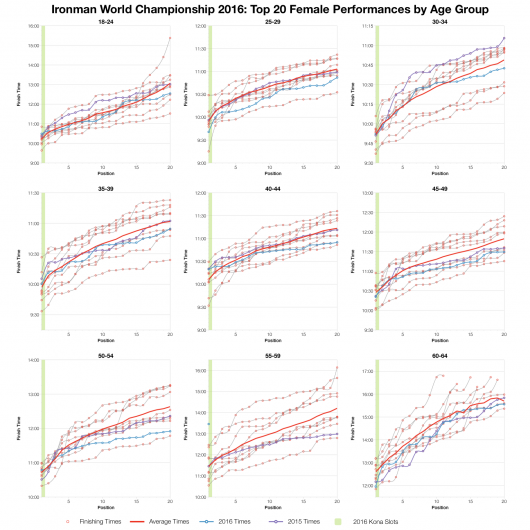 The 2016 race appears to be about average to faster than average for the top twenty in each age group. It varies a little, with divisions like M40-44, M45-49 and M50-54 standing out this year, but many largely tracking the average times. I don’t think the difference is enough to declare this year’s race fast with any confidence. It does look like it might have been ever so slightly quicker, but it’s by small margins.

You can access a spreadsheet of the full results and splits from the Ironman World Championship 2016 on my Google Drive.