Ironman has announced that the 2019 Ironman World championship will use a series of wave starts for its athletes. Waves aren’t a new feature in Hawaii, the mass start had already been replaced with male and female pro and age group waves to help split athletes up. As the race has grown in size the complaints of drafting and overcrowding on the bike have continued though. So Ironman is now further subdividing the start into waves based on gender and division as shown in the table below.

Smaller starting groups should help reduce the number of athletes travelling through T1 and out onto the bike course at any given time. The hope is that this in turn reduces the concentration of athletes at the start of the bike course and through that the incidents of drafting.

I’ve examined the potential impact of waves and of rolling starts in previous posts back in 2013. The broad conclusion at the time was that waves could effectively reduce athlete density on the course. This was improved if the waves were suitably ordered based on typical swim abilities and also well spaced. I’ve applied the same approach to look at how these changes might impact upon Kona 2019. 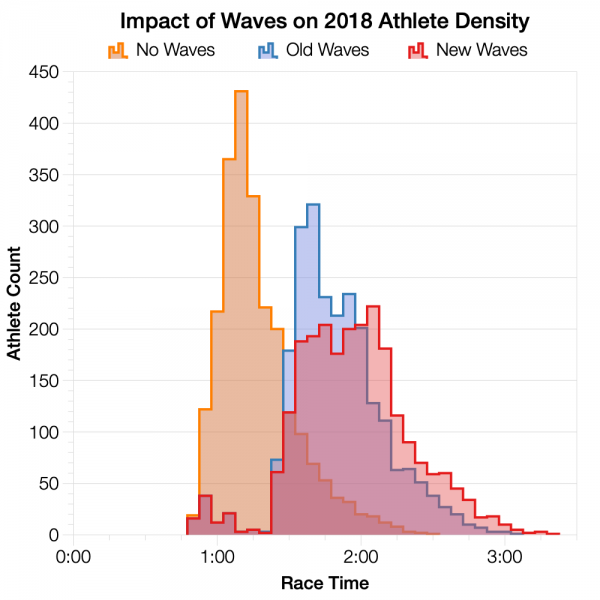 Only considering the results of the 2018 race I predict the above distributions of athletes at the start of the bike. I’ve applied three possible models to the results: a mass start, 2018 wave start or the new 2019 wave start. From that I’ve plotted the distribution of athletes at bike start in 5 minute windows. The simplest observation is that the introduction and variation of waves has shifted the peak flow of athletes from 450 to 220. In particular the broader spread of waves introduced this year helps flatten out and spread the peak.

It’s worth noting that these models assume that changes to the race start will not have significant impact on individual swim performance at the race. Also, for speed and simplicity, I’ve not incorporated legacy athletes into the wave structure. Legacy athletes account for less than 5% of the field and we might expect them to be slower and less involved in athlete crowding.

I can apply this model to the results from other years of racing. The chart above shows the impact on Kona races over the last decade. The key takeaway here is how divisions would always reduce the flow of athletes out of T1, but that this has become a more significant issue in recent years with the growth in Kona. The number of athletes is noted in the top right of each chart to illustrate the changing size of this race. Peak flow in a 2009 mass start was similar to that of a 2018 wave start. 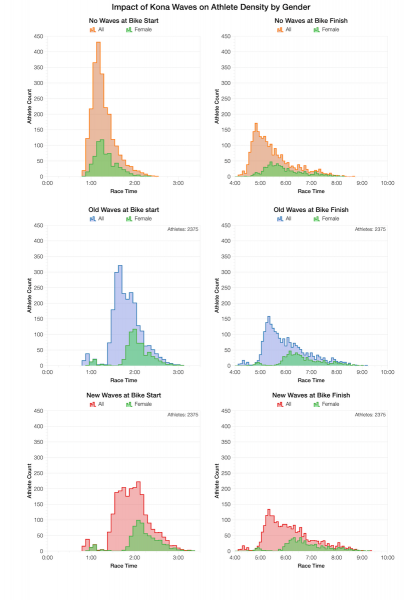 This chart uses 2018 data to look at how women are affected by this wave start change. Putting female age groups in later waves unsurprisingly moved women out from the bulk of the male swimmers. That said there isn’t much difference between having a single women’s wave and splitting that into three.

I’ve also looked at the flow of athletes entering T2. Waves do help to spread this, but the impact across the three is much smaller by this stage. Sending age groupers off 25 minutes after the female pros did a lot to separate them from the fastest age group riders. Under any of the wave systems they have ended up with a number of age group riders finishing among them though.

Splitting Kona into two days of racing, with men one day and women the other, is often suggested as a solution to overcrowding. If we consider just male athletes s in the charts above then we can see that with all age group men together, as in the old wave system there would still be a short lived big peak which the new wave system would help alleviate. Men make up over 70% of the field, even racing on their own some form of subdivision is needed to reduce flow out of T1.

Effectively there are two things Ironman can do to reduce the flow of athletes onto the bike. Either reduce the overall number of athletes racing significantly which would mean fewer slots on offer and make qualifying more challenging. Or divide the field into waves to produce the same reduction in flow rate. It’s not surprising they’ve chosen the latter. If Kona continues to grow they may need to revise these divisions further in coming years.