Ok, so let’s get it out of the way. Back from the training camp and off to the Tour of Wessex. Day 1 and 2 weather was fine, day 3 pissing it down and strong winds. I didn’t take much convincing that it was too much for a ride and pulled out. People did ride, I’d like to think when they headed off earlier the weather didn’t seem quite so bad, but basically I failed to man up on this one. To make up as best I could I did a 3 hour turbo session at home which was a fair strain after all that cycling. 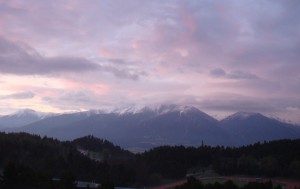 That was the view from my window at Font Romeu, pretty nice to wake up to. You can just see the track in that picture, I ran round it once, then I ran back to my room. It was getting towards the end of the camp and we’d had a mini aquathon at the start of the day. Result was dead legs so when I got to the track and struggled to hold my easy pace round it I decided to save further embarrassment and leave it to the real runners. Similarly at the pool it was best not to wonder what the real swimmers must be thinking.

So rest of week in France went well and I’ve come away feeling pretty confident about my cycling for sure. Flew home on the Friday for the Tour of Wessex, on the plane happened to sit next to a woman who ran the logistics for an adventure racing team. It was interesting chatting to her about the races they’d done and all my plans for the coming year. Always good to meet people who understand the urge to test your endurance. The team has a website, which is unsurprisingly in French, but still interesting even if your French ability stopped somewhere at GCSE. Hopefully though I’ve picked up another contact to help me in my travels and training!

So the Tour of Wessex was mostly good, I don’t really feel too bad about dropping the last day. The first 2 days went pretty well for me, not that I’d have said this had I been asked in the first 3 hours of day 1. Tired legs and fresh friends made for a few hours of hell as I tried to hang on. Then magically the legs came back and I was flying in the last couple of hours. It was great to be riding so strong and really pushing with one of the other guys. Day 2 I felt good from the start, when we did start that is, having planned to get off early I managed to leave my bike shoes at the cottage and a ‘quick’ trip back ensued. It was only fair after putting my friend out like that that when he felt weak on the bike I dragged him round in my draft. I was pretty pleased to be riding strongly again and towards the end it was back to the more aggressive riding of the previous day. I made myself do the turbo on day 3 simply as I’d planned for this 3 day finish to my big training week and I was going to have it one way or another. 3 hours on a turbo isn’t quite the same as a big ride outdoors, but in the circumstances it’ll do. Unsurprisingly my legs are feeling pretty wiped out now…

Book review time! Actually, possibly 2 book reviews. Firstly, before going away I read Flow in Sports as a first step in addressing the mental side of racing. It’s an easy read and I would say fairly useful in terms of provoking thought, but it doesn’t give answers. Essentially the concept of flow cannot be taught – examples of its benefits can be given and of how individuals have achieved or used it, but it’s a personal thing. At the least the book has made me consider the importance of focus and visualisation for me. I have more in the field to follow up with and will see if it leads to anything more concrete. Second book review – Running with the Buffaloes which follows a cross country team. It’s a pretty inspiring read I find, though like many sports books it’s not something to read if quality of writing is a key concern. It’s not going to appeal massively to those outside of athletics, but it’s an insight into the level of commitment at the top end of sports (for similar reading Gold in the Water is worth picking up).

I’m back to a couple of weeks of work before another training camp, I’ve got a race in the middle of all this which I’m starting to look forward to now. I’m replacing some of the nervousness early in the season with a bit of confidence which is good. The urgent tasks on my agenda this week are recovering, getting a bike service sorted out and planning a trip to the dentist. After boasting about 9 years without dental treatment a tooth has decided to start falling apart. Guess that’ll teach me. All in all though things go well and I’m excited to see if I can build a little bit more on the fitness I’ve achieved so far.