☰
Home > Too Much Time on my Hands

Too Much Time on my Hands

All going to plan this time next week I will have finished my fourth Ironman and set a new PB. I’ll be in the recovery area trying to decide the priorities between taking on some food, getting in the showers or having a massage before too many athletes start to arrive. Last year I got the massage and shower in first whilst there were no queues and almost passed out from hypoglycaemia! So as part of this years plan, it’s food-massage-shower-food. But perhaps I’m getting ahead of myself.

I’ll admit I’m blogging more out of a need for consistency than out of news or updates. The title is true, I have a lot of time on my hands and as the days go on it just increases. This is not good for my coffee consumption nor my bank balance. Ironman events typically boost the local economy – I’m doing my bit in the numerous cafes in town. Long blacks are back in favour and the Cappuccinos (or Mugocinnos as large cappuccinos tend to be known here) are limited to one a day. Similarly I’m tightening up the diet, all good foods no wasted calories. It’s tough though, my stomach wants to eat like a 30 hour training week still, but that’s a road to serious weight gain right now!

So other than probably achieving new PBs in caffeine consumption what have the past few days brought? Well I finally fixed the small tear in my wetsuit, had it for ages and now suddenly had the time to deal with it. I also cut the legs a little shorter which did prove to make removal much easier. I had a fantastic swim this morning the water was once again dead calm so I couldn’t resist doing the full Jetty swim. Calm conditions and clear waters meant you could see all the native wild life. Running a little late and so not going out with a group meant that sharks were the wild life that mainly occupied my mind! Again, no sightings.

The weekend has provided some reassuring training sessions. Yesterdays group ride went well for me, I sat on the front most of the time and controlled my effort by heart rate. Conditions were calm with little wind to speak of and I found that I could hold a good Ironman pace very easily. I can only hope for a similar state of affairs next weekend, right now the long range weather forecast changes by the hour so who knows. Ask a local and opinions will vary from it’s going to be perfect weather through to we’re due a storm. We shall see and whatever the day brings rely on the fact that we’re all in the same boat.

This mornings swim apart from being an excellent wildlife safari was also another reassuring session. A bit of fiddling about getting the wetsuit on and spending a lot of time positioning it before I set out seemed to pay off. Shoulder fatigue was at a minimum and I felt pretty comfortable. Still lacking a watch means I don’t know an exact time, but it was around about an hour for close to the Ironman distance. As the swim is the stage I’m most uncertain of in my predictions it was good to be close to my race day goal. More importantly feeling comfortable in the suit was a relief, with all the time I could want to worry about things I had been debating purchasing a long john wetsuit for the race. Searching the web however reveals a general consensus that whatever you may feel as a swimmer a long john is slower than a full suit.

I will be out for a lap of the run course shortly and I hope another positive session to make me feel ready to race. Compared to my memories of the run up to Switzerland I’m feeling fresher and ready to go. This is where I realise I blog and so what I was feeling 7 days out from Ironman Switzerland is there for all to see! So yes I’m feeling much fresher and fitter than before. Were the race tomorrow I’d probably be about ready to go. I hope that doesn’t mean I’ve peaked too early! I’m also a lot less anxious, only the most minor hint of race nerves that creep in when I state my goals.

With race week beginning I’ll have a bit more to do so the time should pass a little easier. I’m saving detailing the race plan or mentioning some of what I’ll be up to this week for future posts. If I don’t things will get really sparse round here for a while. There’s a few exciting things on the cards at least. Well, you know, I’m excited by them. 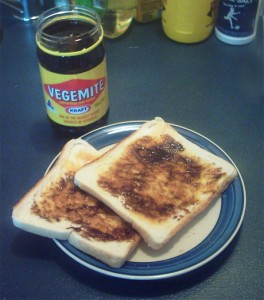 However I want to end with two confessions. Firstly I hate Marmite, but as I discovered last weekend Vegemite is OK. My first taste was in front of half the tri club all keen to provide me with tips on how it should be eaten. Anyway, it’s actually all right. Secondly I caught myself finishing sentences like they were questions, with the Aussie style upwards inflection. Not confessional, but also I think the British need to relax and go with the flow more. Seriously, they’re far too uptight about things over here, it all works out… I fear I’m turning native.