It’s been a quality week here in New Zealand. Both the experiences and the training. I’ve been doing a little less volume than I would normally do in the week (25 versus 35 hours), but the time on the bike has been a little bit tougher. Recovery has been pretty strong though and I’m starting to feel pretty fit. If I want to go hard it’s getting easier to go hard. It’s a week to Epic Camp and I’m feeling lean and ready to go. 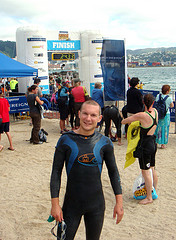 Swimming has suffered a little whilst I’m here, but in terms of quality the Ocean Swim in Wellington certainly delivered. I took a fair battering from a very rough sea and took around 50 minutes for 2.8K. It was a real battle to sight and swim out into the chop. The waves didn’t do enough to help on the way back either. At the very least I did beat any of the celebrities from NZ soap Shortland Street. From what I can tell conditions were bad enough that the time was fairly respectable. Unpacking my wetsuit and trunks this morning I was glad I opted for a wetsuit, not least for the cold, but the stitching in my trunks fell apart! They were getting old.

Not to be outdone by the Gold Coast Wellington has turned on the sun the past couple of days. It’s been a great weekend for training and I’ve certainly made the most of it with some awesome riding. Generally I’d say conditions here make for some challenging and honest rides. Winds can be tough going and the road surfaces appalling. I’m glad to have the powertap to let me know exactly how tough the going really is. The climbs here are great, ranging from short and sharp through to longer and gradual. Either way they’re virtually unavoidable.

Unfortunately I seem to be descending like a brick at the moment. I’ve never been a great descender and a crash a couple of years back did nothing to help. For some reason though I just can’t seem to get it together mentally and am far too tense. Partly it’s the slightly awkward bike position I’ve adopted to make my road bike a little more tri-like. The handling is definitely impaired. Certainly the crappy brake blocks put on the rear wheel at its last service didn’t help. I’ve switched in my preferred brakes and stopping is improved, but the mental game is still a little off.

Whilst not out on the bike I’ve been relaxing with the Tour Down Under or the Australian Open Tennis. The former is to be honest a little dull. Multiple stages of racing consisting of small break aways that get caught and then a sprint. Whilst the course has apparently been toughened up this year it’s still no where near testing enough. The latter has been far more engrossing. I particularly enjoy watching the shifts in play how fatigue and psychology make such a big part over an entire match. I’m not strictly much of a tennis fan, but I am getting into it.

That’s it for now, I’m quite enjoying life away from the Internet at the moment. There’s certainly a few things I’ll take from this when I’m back on the Coast. I’ve a few more days of this quality focus and plenty of rest and then Epic. Should all be good, eh bro?