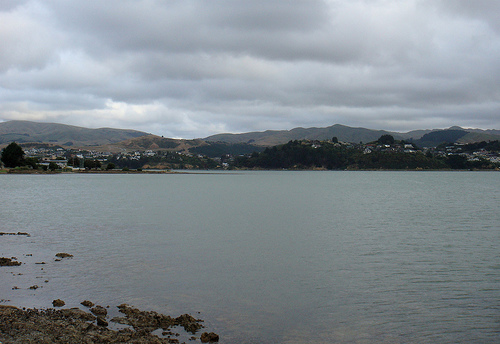 Third day in New Zealand and I’m loving it here! I can’t pin this on any particular thing, there’s so much to mention. My mate and his family are superb hosts and have gone out their way to show me how great NZ is. The scenery is fantastic, today’s picture is from a local run loop round the inlet. The views are spectacular and it’s flat which round here is a bit of a rarity. If my mate didn’t live on a hill you’d not have to do any climbing on this one.

I flew out on Tuesday on what has to be the emptiest plane I’ve ever been on. I think there were less than 50 of us on the plane, including the crew! I have to give kudos to Air New Zealand as that was probably the most pleasant flight I’ve ever been on. Plenty of leg space and a quality TV system and all that in economy too. Even the cutlery was high spec! I got to see another Simon Pegg movie, “How to lose friends and alienate people”. At best it’s OK and I’m being pretty generous there. I prefer to watch trash when I’m flying so I also caught most of a Vin Diesel movie, “Babylon AD”. At best it’s a Vin Diesel movie and I’m bein generous here too!

Once I was here it was a case of stick the bike back together and after a bit of relaxing a little ride. Not being the usual sunny climate I stuck the gilet on for the first time in ages. Then we headed north up a gradual climb called Paeka. The countryside here is far more reminiscent of home and at times you could be in the Lake District. These days I’m used to far drier, browner vegetation all this greenery is a bit of a change. Paeka gives some great views up the coastline and on the return I could see the top of the south island. After that it was a case of chilling out, chatting and staying up far later than usual!

I started my first full day here with the previously mentioned run round the inlet. A great introduction to the local area. I was a little nervous as with my sense of direction there was the potential for things to go very wrong! I didn’t have any food or money on me so whilst I was pretty sure I was on route I wasn’t 100% sure how long I’d be out there for. Still I made it back in one piece having stuck exactly to the course too. The day was also turning out to be really sunny. The Gold Coast has the heat, but the sun here is far more intense. There’s no way you can go without suntan lotion for very long.

Then we all went off to the local outdoor pool which I was concerned might be a little cold by my standards. With the sun out though it was the perfect temperature. The length though was a little bit odd at just over 33m so 3 lengths per 100. Completely threw my counting for the day! I knocked out a pretty decent set of intervals with and without paddles. Particularly enjoying the free speed shorter pools give you, nothing like an extra turn for boosting your 100m time! And the extra shallow shallow end helped refine my tumble turn technique!

For a complete change to the normal I didn’t go out on the bike for my ride, instead joining my mate’s RPM class. He instructs a couple of classes at a gym in Wellington each week. It’s been a long, long time since I’ve done a spin class or similar. Trying out new stuff is always good fun though so I had no problem giving it a go. It was a tough 45 minutes because I absolutely slaughtered myself with the resistance. Sweat was pouring off me, I soaked the floor, my towel, the bike… I must have smelt particularly nice when we popped into the supermarket on the way home.

Yesterday we headed out on the bike for a bit longer. Unfortunately the sun had decided to hide and the wind had decided to come out. If you’ve managed to avoid the hills somehow then there’s always a headwind to contend with instead. My mate took me on a route down to the marina in Wellington. We traced through hilly back routes to avoid traffic and get a few undulations in. It’s very honest riding round here, there’s not much chance to avoid some work. Once down to the sea front the real challenge was the ever changing winds which remarkably mostly stay in your face.

We stopped off at Oriental Bay to check out the sea as I’ve signed-up for the Ocean Swim race held there this Saturday. 2.8km sea swim, but wetsuits allowed fortunately as it’s looks cold as. It was also pretty damn choppy too! Could be a tough one if conditions stay like that. I’ll probably get a little trial run in at some point today so will have some idea how much water I’ll be swallowing and how cold it is!

We continued the wind battered ride around the coastline with a tough climb up to the prison thrown in. Tough for us, but tougher on another triathlete who decided he wasn’t going to let us get past him. I was watching my powermeter and thinking we were going pretty hard. He confirmed it by dry retching as we reached the top! He didn’t have to push himself that hard, we weren’t racing up there! Every so often on the climbs you’d get brief spectacular views out over Wellington. Another of those wish I had thought of my camera moments.

One of the best things over here is the coffee. I thought Oz was a step up from the UK, but New Zealand has blown it out the water. This is the real stuff! Strong as and great flavour. They even have these fantastic coffee muesli bars. All the benefits of a coffee, but in bar form. We stopped on the way back for a quick coffee. I combined my strong long black with a coffee muesli bar. It was a potent caffeine mix that gave me the rush I’ve been missing for so long. As I commented to my mate tat I think they’ve been giving me decaf on the Coast as I’ve not had that buzz for so long! It helped me hammer out a pretty solid pace into the headwind on the trip back.

Having been out longer than expected I had to rush off to my massage appointment and lie there stomach gurgling in complaint about the lack of food. If it wasn’t for that I’d have been asleep on the table! Somehow I managed to finish the day with another run out round the inlet. It was one of those times it was tough to actually get yourself out the door, but once you were going things were fine. This time though I had a some food, just in case!

Not sure what today’s plans will be, probably that sea swim and I’m sure I’ll get another bike in. I’m also sure that any ride is going to involve more of those hills and more of that wind!