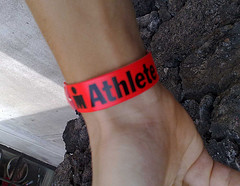 There’s no denying that the race is upon us. Once you’re tagged up and have your race numbers that’s it there’s not long to go. My calendar seems increasingly busy. Not training which is pleasantly light, but there’s still plenty to do. Of course I’m counting the obligatory long breakfasts and coffee stops in there, but things are hectic! You have to make sure you allow yourself time to chill.

The usual early morning start to the day with a trip down to the pier for a swim. Pleasingly it felt so much better than the last couple of days. The gentle splash I went for the day before must have been good for me. Even getting in early is busy now though. You have to be particularly careful on your return to avoid crashes.

The Coffees of Hawaii boat was out for the first time too. Having had a good swim I felt it was appropriate to take a five minute diversion for a quick espresso. Sipping espresso in the ocean with a salty mouth is an interesting experience. Apparently there were dolphins out there, but yet again I failed to see them! A quick coffee before heading into shore seems a nice relaxing way to finish my swims over the next few days.

Breakfast was at Splashers once again. I’m already at the point where they know my order – a Meat Lover’s Omelete and plenty of coffee! We sat and chatted passing away an hour or two. The waitress has also learned that it’s best just to leave us our own jug of coffee it seems. When we finally dispersed registration had opened up. Despite knowing and being warned that there would be queues that’s where I headed. 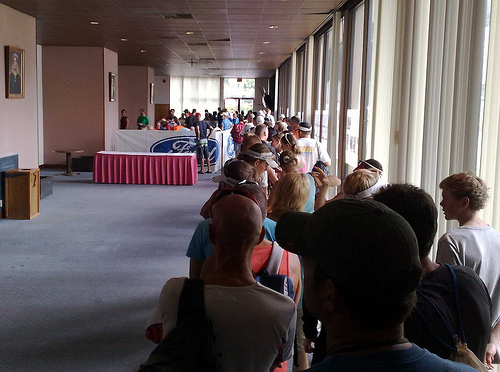 It took a bit over thirty minutes to get through the registration process. I had been warned! But I like to get these things done and out the way. It help keeps me calm and in control in the build up to the race. It may not be the quickest thing to do, but the important thing is to stick to your own preferred routine. Clearly I’m not alone in preferring early rego! On the way out you get given two family passes to behind the Ironman finish line. Not needing mine I immediately gave away one to a German woman desperate to have both her parents and boyfriend there. I figure it’s worth building up some good Karma for Saturday.

So I’m officially in the race and tagged up. Coloured wrist bands denote our age groups this year. A response to the number of athletes (myself included) opting to use compression socks. After an initial plan to ban them it appears a hasty retreat was made and an alternative solution found. 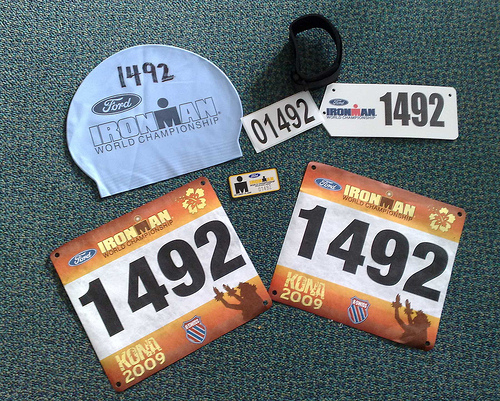 I’d arranged more training with Roger. He’s been proving a useful ally in my final preparations. Today it was a case of a nice easy ride of the one part of the course I hadn’t done – the town section. I’m very glad I have now as I’m far more aware of the climbing and relative slowness of this part. It was a very gentle ride really, especially with all the downhill on the way back. Pleasingly by the end of it I was starting to feel pretty good. Positive signs prior to race day?

We transitioned into a run from my hotel room. Back out onto the Queen K for a couple of one mile intervals. So it was easy out there and then a hard, hard effort between the handy mile markers. My legs were feeling pretty good at least on the easy bits. The first interval didn’t feel that great, but then they never do! The second felt better. I jogged back to the hotel feeling boosted from two good sessions. Signs are there that the taper is coming together.

Interestingly on the running I’ve ended up doing less than in my taper plan. Partly because some sessions have put more training stress in the system. Also a response to how I felt. I followed my head rather than the numbers and backed off to try to regain the freshness. The question now is whether much further short, easy running is of any real benefit to me. Or am I better off keeping resting the legs?

I didn’t have much time for recovery. Instead dashing out with Roger to grab lunch before our respective appointments. Roger took me to a small cafe he’d found. The chicken salad there proved slow to come and tiny! I was still hungry afterwards! I have to say that when Roger has told me he finds it hard to have enough energy for some workouts following the paleo diet I think it might be portion size! He thought it was pretty reasonable! 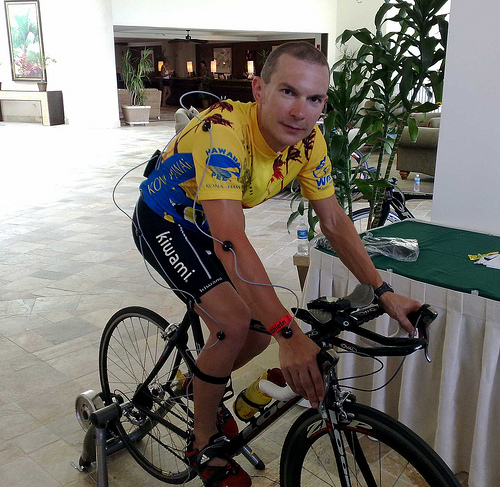 I cycled off to have my bike fit appointment with the guys from Retul. The system uses a bunch of sensors stuck to your body to track your position in space. It makes for a very quick bike fitting process and a very dynamic one. The guys could immediately track my body angles throughout my spin and make corrections. In less than an hour some minor adjustments to my bike were suggested and also enough data was collected to recommend TT frames if I wanted.

I wasn’t too pleased to hear I would fit well on a Look 596. I don’t have the money for one much as I’d love it! I was pleased that my fit had basically been OK though the saddle was a little low. They recommended I move it up one centimetre and forward the same for an ITU style position. For a road position I would need to drop it back a little further. We went ahead and made the change.

I have to admit that on the trainer there and on the 10km ride home (turns out they were further out than I thought!) it did feel comfortable. It should improve my efficiency somewhat. I did notice my hips felt far more stale and balanced. Also resting on the aerobars was more comfortable I had my weight more firmly on them and less on my core. You don’t need to tell me the risks of changing position right before a race though! In fact they themselves admitted they advise a month of riding before you race a new position. I aim to trial it over the next two days and make the call before bike check-in on Friday.

Having had such an inadequate lunch it was a quick dash out to the supermarket to buy another chicken. Once again I ate half, saving the rest for the next day. This race is heavily fuelled by chicken! Some food and relaxation and then down to the King K to join the Parade of Nations. 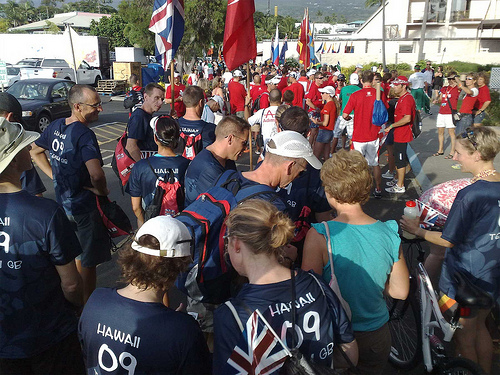 I bumped into Rachel Joyce and we hunted down the UK section together. Way there at the back. Tri UK had provided Team GB T Shirts and goody bags for us all. Pretty decent quality shirt too, little larger than I go for, but not to complain about in my case. The parade itself was good fun. Ian Osborne and Phillip Graves led us in a couple of cars. They threw out sweets to the people lining the streets. It was fun and whilst the streets may not have been crowded everyone got into the spirit of things. It’s good to do something like this that the locals can enjoy after we place so many demands on them. 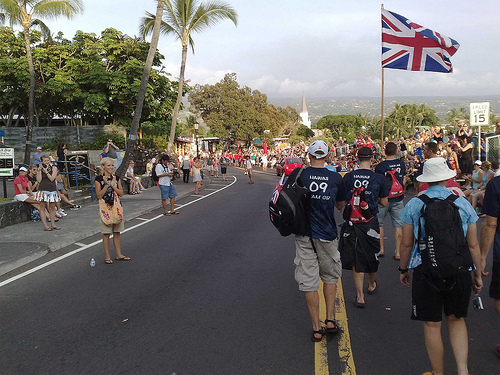 Rather than fight in the expo we all headed straight off for dinner afterwards. Admittedly we did take the time to tast the hairy Maltesers Roger told us Powerbar had. They were pretty nice. Some kind of protein/recovery snack, but tasty. Tried a couple, but didn’t want to spoil my appetite for salad later! More chicken of course and finished the evening with another coffee at Kope Lani.

All in all a good day. Some confidence building sessions, some help in setting up the bike with the potential for long term rewards and a bit of relaxation. It’s not long to go now and mostly I just want as little stress as possible.