Race Week in Kona – Day Ten – Not so Chilled 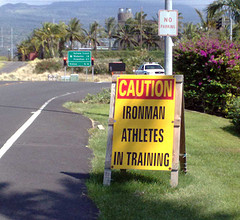 Today has been hugely frustrating. OK perhaps hugely is an exaggeration, but it’s fair to say I don’t feel like I really followed the plan well. Paleo man discovered some non-paleo foods on a couple of occasions and too much time was spent wasting energy on my feet. So I finish off the day starting the blog report less chilled than I want to be. Tomorrow my aim is to be totally relaxed outside of training. Not that I plan too much training now.

If you’ve been following the blog you can guess how the day started. Early of course, in fact too early as I woke at 4am! Would have liked a bit more sleep than that, but found I wasn’t going to get off again so gave up trying. Had to wait till five before the hotel coffee as available though. Still the early hours provide some time to get on with bits and pieces for the day ahead.

Once it hit 6:30 I headed down to get in the water ahead of the crowds. Makes things a little easier as I discovered on my return. Douglas and Roger were there and we met at various points on the swim. I also bumped into Bevan and John from IM Talk and Epic Camp. They were headed out to the Coffees of Hawaii boat for the morning and had to dash. At my usual turn around buoy I met up with Douglas once more and we agreed to swim in. He then shot off like a rocket! When I caught up with him for an espresso at the boat he put it down to his swim squad. Certainly seems to have worked.

I managed to get back in in time to miss the major queues for the showers and changing rooms. I’m noting this one for tomorrow because it’ll be a long wait otherwise! Once I was changed I headed over for some free ART massage to see if it’d help with my twitchy left calf. Never experienced ART before and have to say I was impressed. It involves the recipient a lot more than most massages and seemed to effectively ease some of my discomfort. I’m planning to return with a list of areas to look over before race day!

Then, of course, breakfast at Splashers where I had my usual and lots of coffee too. After a bit of relaxation and a chat I headed off to check out the Expo. It was in many respects a disappointment. In the bike section there didn’t seem that much interest in talking with me or selling their stuff. I admired a few bikes from Look, Specialised and Quintana Roo. I also got to see some of the lovely 3T bars up close, though the lack of interest of their reps was remarkable! 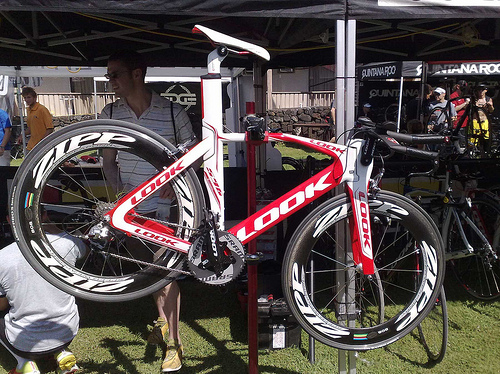 I’m largely pleased that there was little or nothing to tempt me into spending money I don’t have! I think enough is being spent on this trip without more merchandise or unnecessary equipment. Of course the Ironman mattress is very tempting though! Worse was the temptation of trying Erin Baker’s Granola – not Paleo at all, but I had some. Then there’s all the carbs in the sample Powerbar Bites I scoffed at their stand. They are delicious, but just because they have Powerbar on them doesn’t stop them being a sweet! 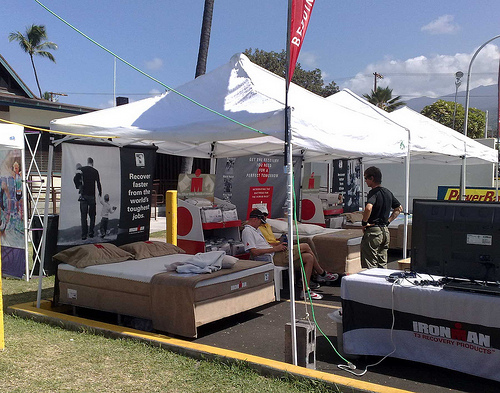 Walking and standing in the heat of the day wastes a lot of energy and when we went for a coffee at Lava Java tiredness caught up with me a little. I headed home after a while to eat a more Paleo lunch and rest up a bit prior to a short ride. Not sure how much rest I really got, but another half a chicken got consumed.

I got myself in gear and out onto the Queen K to test the bike position out. Frustratingly my powermeter seems to have died, probably the batteries, but I put fresh ones in only a month ago. Sure I ride a lot, but not enough to wear down the batteries that quick. I was aiming to mostly ride easy and with a headwind out of town I wasn’t going too fast. Still my legs felt far more sore than my last ride and I just didn’t feel great. On the other hand when I was tempted to push they responded and it worked. Sure they felt poor, but they could push a gear at will.

The position seems good though I’m still nervous about something new this close to the big day. I would describe it as solid. I feel like I’m more firmly placed on the bike and have to move about less. The aerobars are supporting me better and hopefully that will be easier on the back and make me more efficient.

I turned at the airport about 13km out of town. Some cops were there at what looked like a bike accident. Sort of puts sore legs into perspective. With a tailwind behind me and a brief break for the turn I felt much better and tried pushing my biggest gear hard for a while. Remembering today was about easy training I sat up and eased off only to have a Cervelo P3 come by. Something about the look of the guy tempted me to get back on the bars and push past. I couldn’t resist and did a mile at nearly race pace to drop him!

Ideally once home I’d have chilled out, downloaded my data and put my feet up. Unfortunately the data was missing thanks to the powertap so I won’t be having precise numbers for the rest of this taper! At least it’s almost over so I’m not losing much. As for putting the feet up I had to head to the blueseventy house for the Slowtwitch party where I’d get to collect my skinsuit.

It was a great house just placed way at the top of some hills. So after a 15 minute climb on the bike I was soaking with sweat and had to take a dip in the pool. The party was pretty cool though once again Paleo man discovered some distinctly non-paleo foods. I decided to write off the day as ‘carbo-loading’ the next two will be focussed and good for sure. My carbs will largely come from strict Paleo sources! 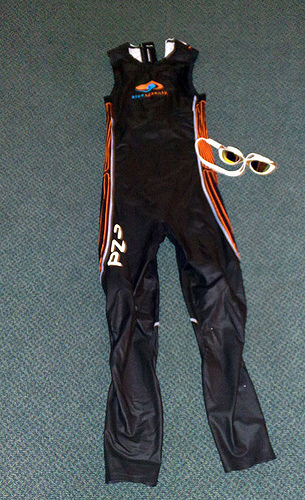 I met up with Dean and Guy from blueseventy. They’re both really friendly guys and thanks to my friends at the blueseventy lake in Reading I had a new PointZero3+ Kona suit put aside for me! It’s the very latest model and had literally just arrived for the race so I’m really grateful to blueseventy and the guys at the lake for arranging that for me. I can’t wait to test it out in the race.

I chatted with a few people at the party though not being a prolific Slowtwitcher was far rom familiar with everyone. Ian Osborne and Emma-Kate Lidbury turned up later on so I got to catch up on how things were going for them. We discussed our experiences of the heat and humidity, the building race atmosphere and excitement and how some of the Brits will do.

With a dinner appointment to keep with Roger I had to dash off as soon as the prize draw was done and I’d got my suit. At least it was downhill all the way to Bongo Ben’s! More chicken in a salad and back to Paleo again. Roger needed to call into Cycle Station to check what was happening with his bike. He’s had terrible luck with a warranty issue in the bottom bracket occurring right before the race. It sounds like a nasty design flaw the way the mechanic described it. Whilst far from ideal he’s opting to ride it and hope it lasts the event.

Whilst waiting for the mechanic to turn up I had my last non-paleo moment in Lava Java. We had a couple of coffees and I couldn’t resist a chunk of Roger’s energy flapjack. It was pretty nice it has to be said! I justified it that one day won’t do that much harm this close to race day! Back to normal service tomorrow, hopefully with fresher legs to boot. I needed the pick me up I think after such a stressful day.

Back at the hotel I spent about 20 minutes squeezing into the new blueseventy suit. This one will definitely need help to do up. It’s a tight fit and hard to put on when sweaty in a room! I’ll be trying it out tomorrow to see what difference it makes. I’m hoping some of the performance benefits others have claimed will come my way! Even 1 second per 100m works out at 38 seconds saved!