It’s close enough to the end of the year to review my training. Whatever I do tomorrow will make little difference either way. Not surprisingly being a full time athlete has led to a big year of training. More than I’ve ever managed in the past. The results have been PBs, two trips to the age group podium in Ironman events, qualifying for Kona twice and racing well there too. Not bad really!

Not bad numbers for training either! As you’d expect plenty of time spent training, resulting in a far bigger training load for the year than before. That’s what it took to get those results. A lot of work to go a couple of minutes faster in Busselton!

Numbers only tell so much I’m more interested in the pattern of training and racing. 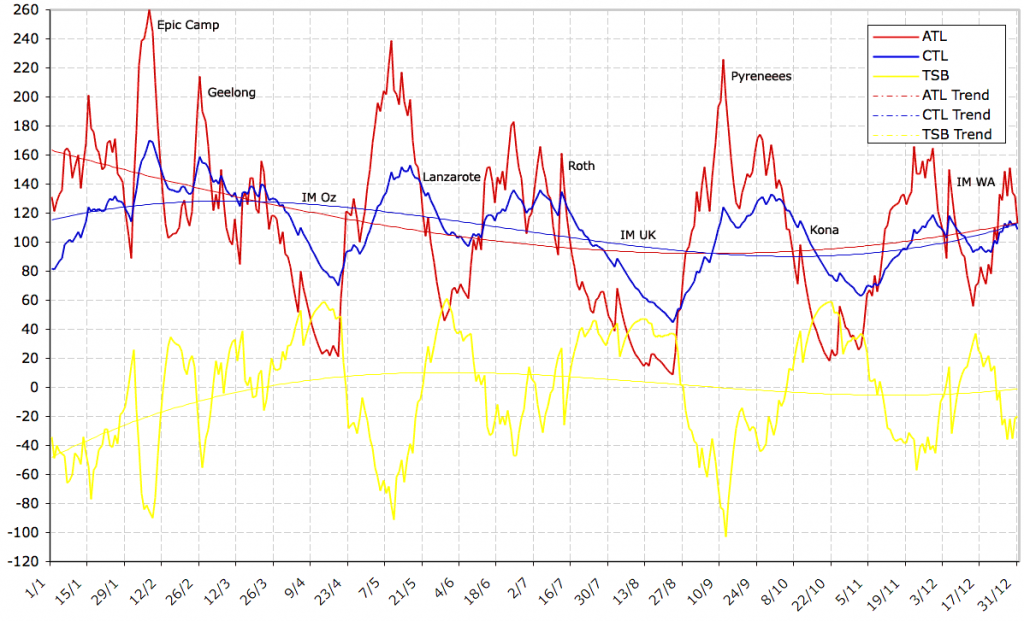 My performance management chart for the last year. As ever, check the Power 411 over on Training Peaks if you’re unfamiliar with this. What I’m interested in here is my Chronic Training Load (CTL) or fitness as it’s sometimes called. Roughly speaking when you see that blue line rising I’m building fitness. When it falls I’m losing fitness. As my training plans stressed me you see the increase in that fitness. Then come tapers or recovery periods around races the fitness drops. All perfectly normal.

With Epic Camp just around the corner you can see the first big spike to my CTL from this year’s. It’ll be interesting to see what a two week camp does to me in terms of this chart. Judging by CTL values Epic Camp 2009 brought me to my highest level of fitness of the year. I couldn’t maintain it and had to recover after camp, but was then building from a higher base. A little mini training camp in Geelong with Toby provided another decent boost.

Ironman Australia was a bit of a disastrous start to my racing calendar. I messed up the taper and run in apart from anything else. You can see after Geelong I never really managed to progress my training much further. Things were fairly erratic and the final taper period lost a lot of what I’d built.

From Australia to Lanzarote where I put in a few bigs weeks in the run up to the race. Training was great and I approached the fitness levels I’d achieved in Oz. This time a nasty saddle sore derailed my plans and Lanza was my second disaster of the year. I’ll admit I was left seriously doubting my choices at this point in time!

If one thing came from my poor race in Lanzarote it was quick recovery that soon had me training again. I set to work building up for Roth and Ironman UK. Time was limited and there was a blip in the build up to Roth where I was very slightly injured. Mercifully brief, but not in the original plan.

Not that it mattered too much, Roth went very well. I raced on a minimal taper and with my training setup for the power data. The plan was to take Roth easy and hit Ironman UK hard. I didn’t race that easily. The diet and weight loss I achieved after Lanza paid dividends with my running. Also worth mentioning is I started running daily and trail racing every week. The combination was a new Ironman marathon PB.

The three weeks to Ironman UK were a nightmare. My calves were so tight I didn’t get to run until the week before the race! That leaves you with plenty of uncertainty as to how things will go. I’d aimed to follow a plan of active recovery that I completely failed to stick to! Somehow it came together on race day and I raced to third in my age group and the Kona slot I’d been after for so long.

I’ve added trend lines to roughly indicate how my fitness changed over the year. Something I suspected with the busy race schedule was that I was slowly losing fitness between each race. A combination of tapers and recovery left me with insufficient time to reach the levels I’ve managed in Oz and Lanzarote. Certainly the general trend from Lanzarote through to Kona is a gradual drop off. It’s after Kona it starts to rebuild and is pleasingly on the increase as the year ends.

The Kona build was full on! The hardest I’d trained since Epic Camp or Lanzarote. Motivation was high and I was putting in the time and effort. The aim was to try and get back to a decent level of fitness after some weeks off following Ironman UK. A trip to the Pyrenees provided a decent boost to fitness. Once I recovered from it I was able to put in a last solid week in Kona. My taper involved more work than originally imagined, but the result was a great race.

Coming out of Kona I was far more fatigued than expected. The next couple of weeks I travelled, ate what I liked and ballooned up in size! Once I was in Busselton I settled into training and got a few good weeks in. Not at the fitness levels I’d managed for any of my previous races, but I’d done all I could.

Demonstrating that CTL levels aren’t everything I had a sharp taper to the race and knocked out a PB! Okay after a year of hard training it was only by two or three minutes, but the day was much tougher than 2008. More importantly was the better placement and the Kona slot. All set up to go again!

This time I put the active recovery in place and got out on the bike straight away (having an ice cream parlour 30km away helped). Everything was kept as easy intensities, but the fitness loss for the recovery period was greatly reduced. More importantly my legs felt better quickly.

From there I moved over to New Zealand and after a few lethargic days settled into a new routine. Pleasingly this leaves me with a strong upturn in fitness and ending 2009 fitter than I ended 2008. A great place to be finishing things. I’m at a strong point to start 2010 and progress further.

All that description of a graph basically covers the year. I should revisit this topic at some point and look back at what I said at the end of 2008. How much I lived up to aims and expectations. I’m happy with the way things have progressed. Some great racing in the second half of the year, more than made up for the poor start. After over one thousand hours I’m also feeling like I’m in great shape to really start training. However that’s a topic for another post.