Like so many endurance athletes I almost live in fear of losing fitness. Whilst I’ll rationally acknowledge the need for rest and recovery as part of the process there’s a part of me loathing the lost training time. Tracking training load has probably made it worse as I now have a graphical representation of the process. With that in mind I present this chart. 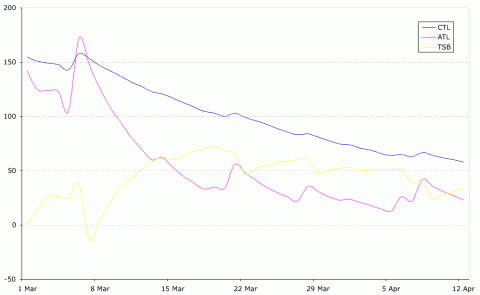 In the month since Ironman New Zealand I have not been so busy! In a period of five weeks I’ve allowed my CTL (fitness) to drop by about 100. What was I doing over those five weeks to let that happen?!

I wasn’t cycling much and neither was I running that much. On the other hand there was quite a bit of swimming. Unfortunately swimming doesn’t contribute as much to my training load as does biking or running. Cutting those two out ensured a decline especially when I’d been maintaining such a high level for CTL.

After most of my events I’ve returned to normal training after a couple of weeks. This time I was travelling back home in that third week. Then in the fourth week when surely I’d have got back to a routine I managed to get sick. For the fifth week I don’t really have any great excuses! The weather was better (but still not what I’m used to), but the motivation was lacking.

There were a few issues. I’ve had a lot of tightness in my calf muscles and the large volume of swimming had left me with quite tight shoulders. Running more than about 10 minutes caused my calves to start locking up and that’d last for at least a day. I’d experienced something similar after Roth last year, though on that occasion it cleared up quite quickly. The shoulders made swimming more uncomfortable than usual. I was willing to put some work in, but it wasn’t much fun. A massage from The Tri Touch has addressed these two issues and I should be able to get past them now.

I’m not here to make excuses for what’s happened though. It wasn’t the rapid return to training I’d planned. Instead it’s probably been the longest break from structured training I’ve had in two years. The thing is for all my previous fears of losing fitness I’m feeling great for the break.

Sleep has improved massively with eight hours becoming normal when I’d struggle to get that in the past. I feel fresh most of the time, days without experiencing a sense of fatigue. Appetite has stabilised and with a healthy diet I’m losing some excess weight even without hours of exercise. There’s a lot to feel positive about.

The truth is whilst I focus on how little I’ve trained I’ve not been sitting on my backside either. One of those weeks involved forty kilometres of swimming and last week not cycling much still involved almost six hours on the bike. Endurance athletes not only fear losing fitness they develop a somewhat skewed perspective on what constitutes being lazy.

With Ironman Lanzarote getting ever closer I started looking for some reassurance that I didn’t need to be too concerned. At the simplest level just scanning over the graphs confirmed my CTL is still higher than it was six weeks out from either Lanzarote or Kona last year. I started from a lower base point and reached a decent peak in five weeks on both occasions. I can do it again!

A bit of research into detraining revealed that whilst your body will start to lose fitness after as little as a week off it doesn’t take that much to slow the decrease. When I have gone for a swim, bike or run in the past week I’ve found it quite easy to put in some quality work. The emphasis is on quite there is something lacking, but it doesn’t seem too big. With all the fear of lost fitness and performance it’s a relief to find there’s still something in the engine.

Not that I’m proposing regularly taking a long break from structured training, but it clearly has its place. If nothing else the mental break was needed! Two years is a long time to focus primarily on training, I was probably due some time off. That’ll be it for the rest of the year. I’ve still got ambitious goals for my races ahead and that’s going to need work.

There’s five weeks to get myself ready for Lanzarote and go after that sub-10 hour goal there. I may have made that a little more challenging for myself. It’s not the preparation I had planned, but who knows perhaps it’ll have done me some good.

I’ve a long ride tomorrow so I guess I’ll find out if a break has done more harm than good. It could be I’m just clutching for excuses for being so slack!