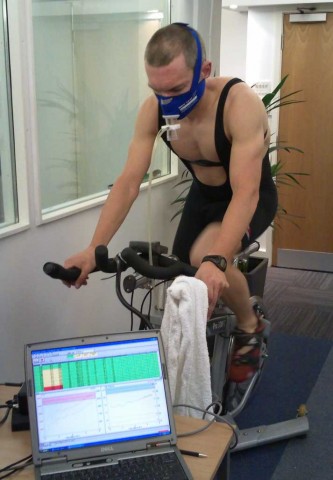 Despite a strong analytical approach to training and racing I’ve never participated in serious testing or performance analysis. The benchmark tests I’ve recently written about are the deepest I’ve looked. This changed on Saturday when I had my first session with Peter Byworth of Metabolic Solutions.

As I considered plans for the next season and what it takes to break 9 hours for Ironman I knew there was no margin for error. My training needs to effectively target limiters and work to develop my strengths. Just logging hours or miles won’t cut it.

Recent training demonstrates that as volume of intensity increases so do nutritional requirements. I can ride a long time at a steady pace without food, but once I’m working at threshold it’s another matter. I’ve experience low patches in training when I couldn’t perform to expectations and sessions would be aborted or postponed. More than a question of calorific intake also one of nutritional timing and breakdown.

Having discussed my training and goals with Peter we decided that the information I needed was fuel usage at various intensities. Pacing is key to Ironman success and ties directly to issues of fuel usage and nutrition. Fuel usage for a given effort and the energy source give a clear idea of optimal pace.

Knowing how much glycogen the body stores along with the rate at which it’s replenished in a race (also tied to pace) gives a limit to the amount of carbohydrate (CHO) you can utilise. Exceed this and you’re heading towards the wall, stay within it and you should have reserves to finish strongly.

We initially performed a Resting Metabolic Rate (RMR) test to give a baseline for daily calorific requirements. That was the easy part as I next hopped on a bike to perform the test under increasing resistance. Stepping from a warm-up to a steady effort then threshold and finally as shown below to failure.

The objective was to get a picture of my fuel substrate usage under increasing intensity. We chose to combine this with a compromised ramp test to collect data over a wide range. Having a longer period at steady and threshold intensities meant I wasn’t fresh enough to really push to VO2max (I tried to make a good effort!)

I’ll receive the raw data later this week, but have come away with a number of points to consider. Anecdotal experience is well backed by the data and it helps explain many aspects of my training.

What this tells me

I consume a relatively low carb diet relying on fruit and vegetables to provide my daily intake. Genetics and training have clearly made me a good fat utiliser and if inactive I don’t need much carbs in the diet. On easier days I can happily stick to low CHO food sources.

Similarly my ability to ride for hours without food relates to my fat utilisation below 250W. At endurance pace I am burning few calories from CHO such that my glycogen stores can keep me going. It’s likely that my low CHO diet means my glycogen stores are generally lower than normal, but if rested sufficient for a 6 hour ride.

From the perspective of an Ironman it’s a good sign. At relatively high intensities I’m still heavily utilising fat and sparing more limited glycogen. The potential to ride hard and still have reserves to carry me through a good marathon is there. Pprecise data enables precise fuelling during a race based on CHO usage.

When I ride harder my reliance on CHO increases (all be it at a slow rate). With lower glycogen reserves particularly during blocks of hard training I’m more likely to run low on CHO. Focussed on riding for long periods at lower intensities this hasn’t been an issue. Increasing the intensity of my riding without changing the patterns of carb intake quickly burns limited glycogen reserves.

The simple conclusion is I’m very efficient at fat utilisation, but if I want to train harder I need more carbohydrate in my diet.

Utilising the Data in Training

Broadly considering the results, my diet and recent training I’m developing a picture of recent issues. I’ve experienced lows in energy, motivation and more importantly ability to perform the hardest sessions. Some days I’m flying, others I don’t have much impetus to train. Easy days and recovery could explain the issue, but however I try to structure my week I never seem to get the balance right.

I know I’m working harder and logging more hours at higher intensity. The tests tell me I’ll utilise a lot more CHO than normal because of this. Combined with a relatively low carb diet giving a lower rate of muscle glycogen replenishment and potentially I’m trying yo perform challenging workouts on low reserves.

If the cycle of muscle glycogen stores doesn’t tally well with my intensity and recovery this could explain fluctuations in training. I’ve constructed a simple model estimating glycogen levels and comparing with intensity over the past month. Don’t worry about the actual numbers its aim is to look at the pattern of performance and carbs. 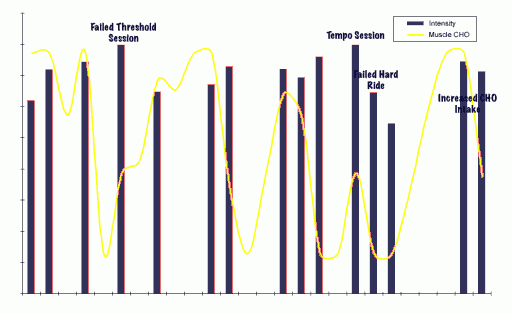 There are a number of limitations to this model. I’ve assumed a linear correlation between intensity and CHO burnt in each session (as proportion of total calories burnt). I’ve also assumed consistent levels of glycogen replenishment rather than variable ones. Not having precise CHO data for the period makes it impossible to know how much was entering the system.

If you accept those assumptions then the model ties in quite well with my theory. There are some notable low days when I would have been significantly depleted in the model. When these coincide with a hard training session the results aren’t pretty. Similarly best performances tend to come when I’ve replenished muscle glycogen through rest or increased carb intake.

I thought I’d see how the model worked against periods where I’d been training more consistently. Two obvious choices were Lanzarote when average intensity was similar to now and New Zealand when intensity was lower. In the former I was eating much more carbs and in the latter I was taking on a compromise between the two. 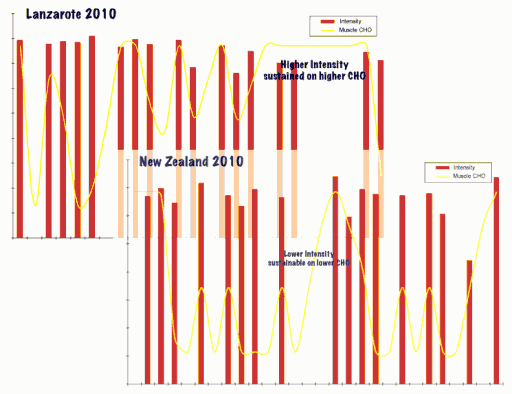 In both cases actual performance was more consistent with NZ it should be noted the intensity of sessions was lower. Daily CHO intake was higher than now in Lanzarote and this did lead to excessive weight on race day. There’s a clear difference between training diet and the tapering diet I need. Once training volume and overall volume of intensity decrease dietary CHO should do likewise.

The real value of these tests is the way they back up experience and provide evidence to support a number of recent beliefs. I’m largely convinced that my low carb intake regardless of training has hindered recent attempts to work harder. Moving forward developing a balanced intake of carbs relating to training volume and intensity is key.

Knowing the ratio of Fat:CHO used at differing intensities allows me to determine a more precise measure of daily carb utilisation and from this guide diet. Weight loss may well slow or stop during these periods, but in training terms performance should increase. The goal is to find a balance between a training weight at 71kg and a diet that supports performance.

My endurance and fat burning capabilities are well trained to go faster at Ironman I need to focus on threshold power. Raising FTP will raise my absolute power at race pace. I only need maintain the levels of fat burning for my metabolism to be suited to the race. If I remain as efficient at fat burning at 70% intensity whilst raising the power for that effort I can race faster.

Raw data will follow in the week and I’ll post again with a detailed look at the results. For now I wanted to give my initial thoughts and reactions. I’m feeling very positive about the coming year and the potential to reach that sub-9 goal.