One of the critical aspects of Ironman racing is maintaining a fuel balance. We’re looking to reach the final hours with muscle glycogen to spare and the ability to continue the effort to the finish. Pacing and feeding are in fine balance, race too hard and fuel will soon become a limiting factor. As intensity increases so does the utilisation of carbohydrate (CHO) – an easy run might be largely fuelled by fat, but a 5K race is highly glycogen dependent. 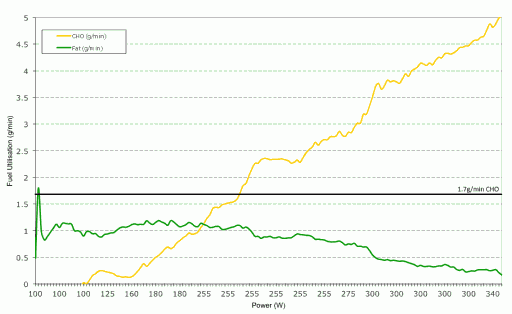 An Ironman sits between those intensities the optimal point being determined by your metabolic efficiency. The chart shows results from my metabolic testing, as the power increases so does my utilisation of CHO. If I can’t supply sufficient amounts of glycogen to the muscles then I’ll be unable to reach higher levels of effort. As we deplete our stores we’re effectively diminishing our ability to work further down the line, you may not know it at the time, but you’ll find out in the latter half of the marathon.

Eating carbs helps delay the onset of fatigue from depleted glycogen stores as muscles utilise the newly available CHO in place of their own. Fuelling is an important aspect of an Ironman plan for this reason. What has to be remembered is there are limits to the rate the body can absorb CHO from the intestine. Above that rate food will sit undigested in the stomach potentially causing GI issues, Ironman eating is not an easy game.

A good pacing and fuelling plan should deliver you to the start of the marathon with most of your glycogen spared. To manage this you need to work at an intensity that allows you to consume and absorb CHO as fast as you utilise it. Using the maximum value of 1.7g CHO/min I need to ride below 250W to achieve it. Eat enough and keep my efforts below that level and in theory I start the marathon ready for a good run.

The absorption rate of CHO is fixed, but training can adjust it’s utilisation rate. Increasing Ironman bike power is effectively raising my power at a given level of CHO utilisation (from 250W utilising 1.7g CHO/min to 270W) and developing the ability to sustain that power for the duration (actually hold 250W for 5 hours). An Ironman training program needs to address this issue, the question is how?

Reading Jesse Kropelnicki’s article on starvation workouts kick started my recent thoughts on metabolic efficiency. I largely agree that there’s little place for starvation workouts in most plans, despite that I’ve ridden long on no food. My training history contains a lot of long steady running and riding often without much in the way of nutrition. Volume was high, but intensity was sufficiently low that I didn’t need to eat; over time I could train harder and still not consume much food.

All training provides adaptations towards metabolic efficiency, training performed in a glycogen depleted state provides a strong stimulus for increased fat utilisation. It wasn’t by design, but my preference for riding long without eating has effectively built my present efficiency. The problem is that whilst I’ve become very efficient the intensity of riding was less effective at developing my ability to sustain higher power. I can sufficiently fuel riding at 250W, but I can’t sustain it for the duration of an Ironman.

Most athlete’s need to work on this ability to maintain race paced efforts and have insufficient free time for high volumes of riding. What works when you’re training thirty hours a week needs adjusting for those training less than fifteen. The reality is working athletes ride three or perhaps four times a week, typically only one of those being long. My own training has moved to similar lines as I realised the limitations of constantly riding for distance.

Shorter, harder sessions such as threshold work or intervals require sufficient fuelling to manage the intensity. The objective isn’t to develop fuel efficiency, but to improve other parameters of fitness, perhaps pace or power at threshold or VO2max. To get the most from the workout you need the glycogen to sustain the efforts. As I learnt in the build to Kona, failure to replenish well after can lead to a meltdown.

Longer sessions give an opportunity to train in a glycogen deprived state and encourage increased fat burning. As a rule I never eat on runs shorter than two hours, I can manage this whilst finishing strongly and recovering for subsequent training. However if I run more than 2.5 hours without food performance fades and recovery is notably impaired. Finding the duration you can run without fuelling takes experimentation, but I’d encourage some exploration in the first half of the year. Always eat well afterwards.

During the early part of my season I tend not to eat on any ride shorter than four hours (my ability to manage this has developed with training). I’d suggest an occasional fuel limited long ride in the schedule is a good thing, but should be used with caution and not mixed with any intensity at first. Don’t approach every long ride in this way, whilst it may be effective in improving fat utilisation it’s less effective for other aspects of fitness. Always eat well afterwards.

Initially the effort level you can sustain will be disappointing and for this reason use these sessions sparingly. They’re effective for developing fat utilisation, but not so much for other fitness parameters. These aren’t time efficient workouts. Torbjorn Sinballe mentions a compromise in a recent Inside Triathlon (unfortunately not available online), by only eating after the first two hours of a session he combined the stimulus of reduced reserves with the ability to work harder later.

In practice one low fuel ride per month without pressure on pace or distance should be enough. Knowing intensity will be lower it’s a good combination in a big weekend, one ride fuelled and at a solid pace, the other low fuel. I’d include at least one long bike incorporating your race fuelling strategy per month, it’s going to take practice to achieve close to optimal CHO intake. Otherwise the Torbjorn style sessions seem a good compromise. Always consider recovery and the impact on subsequent training if you feel they’re impaired then eat.

Metabolic efficiency can be overlooked in favour of power and pace at threshold, but it’s a major factor in Ironman execution. For those looking to push performance incorporating some fuel limited training into their programs can yield results. Emphasise it early in the season and always fuel properly when your sessions are more race specific. Like any aspect of training it shouldn’t be rushed, you need to gradually build how much you can do without food.