In Response to Illness

In the past nothing highlighted the difference between the way I coach myself and the way I coach an athlete than the issue of sickness. Being self-coached – a slightly pretentious way of saying, doing what I like – illness leaves me choosing between how bad I feel and how bad I will feel if I don’t train; a matter of health versus guilt and typically guilt wins. Not to say I disregard my own health, rather I am very bad at judging the extent of an illness, requiring strong symptoms and extreme discomfort to stop me training. Effectively I gamble the short-term advantage of another workout against the potential risk of prolonged sickness. Mostly I’ve been lucky. In contrast, I prefer not to gamble with my athletes’ health, when I’m aware of illness my advice is far more cautionary; perhaps I cost them a fraction of their race fitness, but I never risk more.

As last week’s Lanzarote training camp drew to a close I was faced with a self-coaching dilemma – train or fold? The hint of a cold, that had been there from day one, advanced rapidly under a heavy training load, halfway through camp I had all the symptoms of a head cold. I didn’t stop. By the fourth day I would have rated the ache in my legs more of a limiter than the phlegm in my throat, but this was the turning point. Stronger symptoms and lack of sleep didn’t stop me, with blocked sinuses making every tumble turn uncomfortable and my spit lining the roads, I trained through till the final day. As I shivered in the early morning warmth it was obvious I couldn’t handle a six hour ride, the others left to circuit the island and I allowed myself to imagine I’d go for a spin later before collapsing into bed. I stopped. Drifting in and out of sleep I pondered how I survived Epic Camp Italy.

There are two stories I recount from that camp: one involving a watch, incorrect timezones and a mad dash to ensure camp completion, and the other a head cold so thick it drove my roommate to a quiet sofa for the night. My time in the Dolomites was marred by sickness, the cold developed early and with the constant stress on my body, persisted. I never stopped. Motivation was strong – I’d spent months training just to complete this week in the Italian mountains, I was surrounded by strong athletes and I wasn’t about to be the weakest among them. Laying on my bed in the spartan La Santa apartment I wondered if I no longer had that motivation, was that drive gone? Memories fade, I couldn’t compare the two. Perhaps the Italian illness had grown with each retelling, maybe a points game was all that was required to drag my weakened body round the island now. At the time it was moot; I lacked the energy to decide.

I returned from Lanzarote to more illness. Head cold passed, stomach bug arrived. The days off extend from one through to four. Four days of recovery after five days of training, I felt like a foolish weekend warrior, where was the consistency? Here was my guilt, after a year of inadequate performance a voice in my head responds to hints of failure: you’ve lost it, the drive is gone, put your racing behind you. It falls on deaf ears. My attitude has changed, I balance training differently, but I still know how to push and to hurt, I know how to dig deep when I need to. Weathering illness, toughing out training on a camp makes for great stories, they’re the stock of coffee stops, but history inflates the circumstances. I’ve no measure of how ill I was in Italy, but I know that despite toughing it out and training hard I did not race well after that camp. I’ll never know the impact resting might have had, perhaps I should feel the same guilt for training through as I do when I rest?

Coached or not, the choice to train comes down to an individual and I’m not sure we are well equipped to make it. We’re poor judges between short-term and long-term impact, overestimating the cost of a missed session and undervaluing the price of extended illness, there’s a bias towards training. Aware of my nature I increasingly err on the side of caution, recognising that recovering and effectively training may prove more productive than my default of training through. As I did in Lanzarote, I will take a day in bed. This recent reluctancy to gamble may indicate weaker motivation, but I prefer to see it as a sign I’ve matured, recognising the value in good training and good health. I won’t let guilt drive the choice to train. 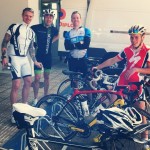 Nothing of Interest in the UK?

Pulling the Pin on Training

From Couch to Marathon