For the last two months I have been training. It passed below this blog’s radar as I nervously found my footing back in the world of running. These were tentative steps that I didn’t want to burden with the scrutiny of analysis or the pressure of public targets and in a blog that has recounted the excesses of my training it seemed embarrassing to discuss the challenges of a thirty minute run. Until now. A relatively comfortable 1:30 half marathon a week ago has satisfied me that I am making progress and given me the confidence to make plans.

So far training has been unstructured. Rather than setting myself goals in volume or speed I have tried to run as my body allowed. When it felt good I ran further or faster and when it didn’t I ran less or not at all. I didn’t seek to batter aching legs because it hadn’t taken much to make them ache in the first place. I supplemented the meagre run volume with strength work in the gym, targeting the same muscle groups in a bid to further encourage resilience. At the same time I moderated my post-Ironman diet, curbed the excesses and started to correct my body composition. I silenced the voice that was telling me it wasn’t enough and just enjoyed what I was able to do well. It looked like this: 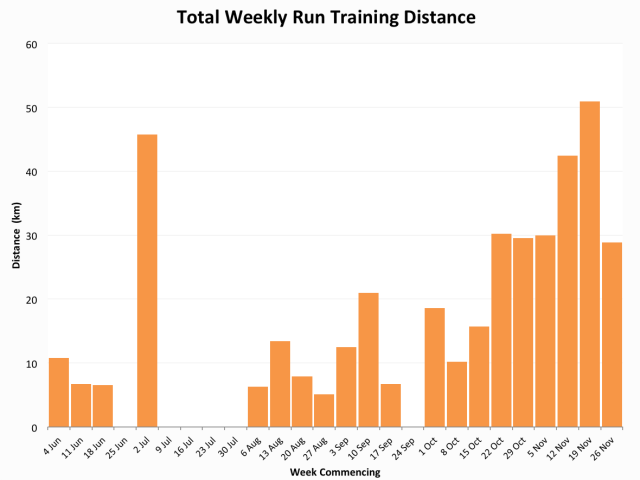 Back in June I ran little and suffered the consequences when I raced Challenge Roth at the start of July. Then the break, once Roth was over I stopped all training for a month, zeroes in every box. August and September were unfocussed – I trained because I felt I should not because I wanted to, an important distinction. The change comes in October, upon my return from a holiday in Provence I make the switch to healthier habits and a greater sense of routine. Finally there is growth.

Slowly. The few first weeks composed of two or three runs on sore, sluggish legs that seemed to have forgotten how to run. The next three jump, no ten percent rule, a doubling of volume, but still responding to how I feel – no longer sore or sluggish I ran further because I could. After that another jump, more volume including the half marathon, but again remaining within tolerable bounds. Then a step back; my legs tired after the race and the first 50km week since May, I didn’t push.

The fear was that such modest volumes could never deliver the improvements I desired. Each unexamined week felt better, but were my senses deceiving me? I raced the half marathon as a test – a training race – my intention to take it steadily. I hit the target I hoped for (the fairest description for my guestimation of pace), although I pushed a harder tempo than planned to achieve that 1:30. I was pleased to deliver that performance on such a short period of low volume training and so far from my racing weight. In that sense it was a positive sign of things to come; I lacked fitness and endurance, but I could still run.

Doubts quelled I finally examined the training I had done – the distance, the volume and the Performance Management Chart. 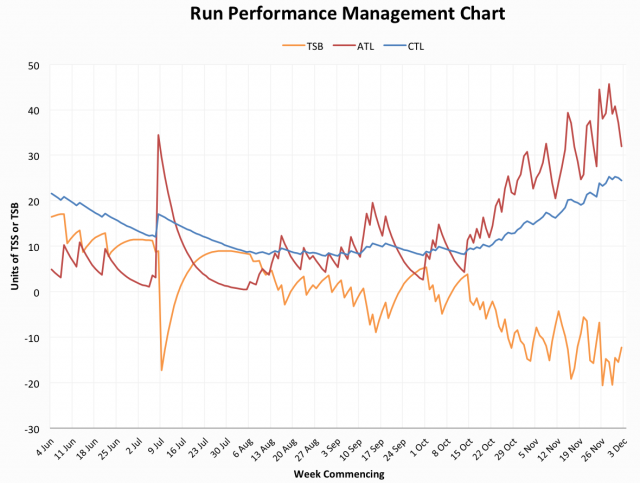 I emptied four months of data from my watch into TrainingPeaks WKO to gain a picture of my fitness. Low, very low, but steadily rising since the start of the new regime. Each week brought sustainable progress and my intuition had so far guided me to greater fitness free of injury. Naturally I was mindful of the next step, the prospect of Brighton Marathon and a new personal best time, but wary of committing to training goals at a point when my run fitness has barely formed. Greater structure will be needed, but simply increasing weekly volume, sensibly divided over five or six runs, does enough. At the moment, more – whether that be volume of intensity – is not necessarily better, its time will come.

Finally I am starting to feel like an athlete, but more importantly I like running again. This is the greatest gain so far: I enjoy my training. I no longer feel the pressure or demands to train within certain historic patterns that worked when I had more time, more fitness and more sports to focus on. Instead I am making steady, practical progress towards a single goal. The test will be in Brighton in April.