When I entered the Brighton Marathon I confidently estimated a finish time of 2:50, my previous marathon best; despite a couple of years of nothing but trouble with my running I was sure of a return to form. Aiming to finish in under 3:15 made me eligible for the Elite Start and required further evidence to back up my claims. Finding proof was a frustrating process, old results had dropped off the face of the Internet and other Russell Coxes clouded the picture. I repeatedly grumbled about the need to prove I could run faster than what was a long run pace of 7:20 miles, until I eventually found some reasonable examples of past results and sent them in.

Last week an email arrived inviting me to join that Elite Start on race day – my proof was enough. Now I am nervous. 7:20 was a long run pace, but the past tense is important here, it’s been a while since I’ve completed a long run, let alone sustained that pace for anything close to the duration of a marathon. My initial indignation at having to prove my intended finish feels like hubris.

Towards the end of last year running was going well. At least until I ran a small half-marathon concluding my biggest running week of the year. After that things went down hill. Whether it was the race, or the increased run volume, or perhaps the impact of the Christmas season, hours went down, food intake went up and I developed a persistent niggle. No more consistency. I lost fitness over the holiday period. Since then the recovery has been slow. The niggle remaining, frustratingly resistant to internet diagnosis, never preventing me running, but present and a concern. Limiting and hardly conducive to motivation.

Which is why, as Gill and I enjoyed an evening out, the topic of Brighton cropped up. Specifically Gill’s concerns that I was going to race under-prepared again. I do have a history. My answer was a definite maybe. I’d stubbornly refused to consider the idea that I might not be ready to race on April 14th, regardless of circumstances. But Gill was right, racing under-prepared has done more harm than good, knocking me further back every time. Rather than setting my path in stone it would be sensible to evaluate my prospects at a later date. There are other marathons if necessary.

It’s rare I discuss my training now. This is a powerful reminder of why I should. I am happy to carry on the pretence that everything is to plan when I know it is not and I am remarkably blinkered to the foibles I’ve clearly identified in the past. Responding to a niggle by trying and failing to train as normal while hoping it will go away is hardly original on my part. Neither is the coach being a bad athlete, acting counter to any reasonable advice he might give. No way to prepare to run a marathon.

The conclusion at the end of our meal was that I would make the decision at the start of March. Allowing a month to address the literal (mild and occasional) pain in my leg and attempt to again be structured and focused in my run training. Which means both proactively dealing with the niggle – stretching, rollers, massage, strength work – and progressing my run volume to the point I have some sense of achieving marathon fitness. The two may yet prove mutually exclusive, so I will resort to Gill’s external verification. Left to my own devices I probably would race under-prepared. 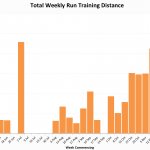 What Place for the Marathon in Ironman Training?