I expected the winds, but not the overcast skies and occasional drizzle that greeted me when I arrived on Lanzarote yesterday afternoon. The worst weather the island has seen in a few months. Still it’s a big improvement on conditions back home and by Saturday, when the athletes arrive, the forecast is for sun. Until then Mark and I can use the time to prepare – get the lay of the land, plan out run routes and finalise the timetable below. 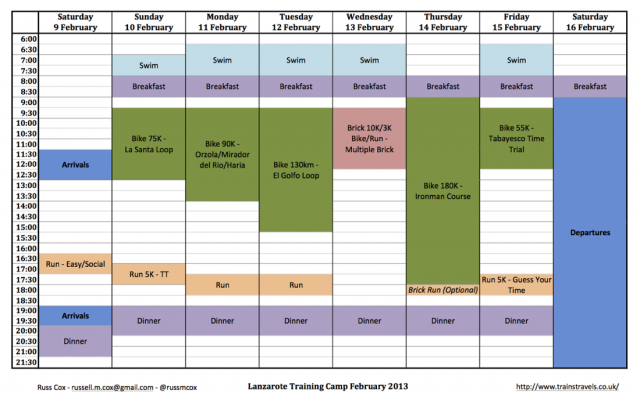 The first day spent at Sands Beach Resort has impressed. I’m used to more spartan training setups, but Sands is a holiday resort first, growing into a sporting centre with the addition of a spacious 25m pool and a new gym arriving shortly. Basically it has everything we need for the camp with the added advantage of comfortable rooms and facilities. It should keep the athletes happy.

Despite spending many weeks training on Lanzarote I’d never visited Costa Teguise. It lies to the side of the Ironman route with little reason for an athlete to detour down to it, but that close proximity means it’s well suited as a training base, only 5 kilometres from the Ironman on relatively quiet roads. Dirt roads north of the hotel are perfect for the camp runs offering a softer footing than the pavement in town and there’s also a narrow rocky trail following the coastline, fun, but a little too technical for this camp.

Having planned and tested some routes around the venue this morning, the afternoon has been spent by the pool – the first swim recording and analysis. Paul was our guinea pig, the advantage of arriving at camp a couple of days early, he swam a few lengths as I filmed from above and below the water. The GoPro and iPad combination works well: capture HD video at 60 frames per second then transfer and playback on the iPad for almost instantaneous feedback. Mark gave 20 minutes of one-on-one coaching working on a few technique points and then we repeated the filming to see how things had changed. 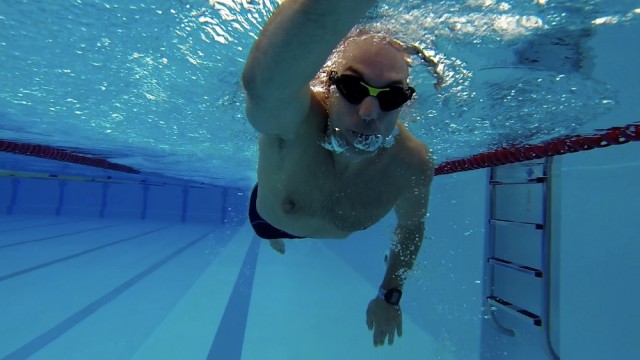 The rest of the athletes arrive tomorrow and the real work begins, but we’ve filled in the final details and are ready for their arrival.