Valentine’s Day and to demonstrate my love for my athletes I set them the longest ride of camp: a loop of the Ironman bike course. That was it. No run or swim on the schedule. It was probably a good job given the vacant looks present as breakfast; we are getting close to the limit.

As ever our groups split – my steady group with the simple aim of completing as much as we could, the faster guys expecting to get round it all, some quicker than others. And then there was Ian who has largely ridden solo on camp, sometimes hanging onto the fast bunch, sometimes dropping off, but always finishing the full distance even when beset by punctures.

At 8:30 I rushed to the front of the Sands Beach Resort, the coach should never be late. I was the only one there. Over the next few minutes a slow trickle of athletes arrived. We are at that stage of fatigue: timings are starting to slip. So at a slightly later than planned 8:45 the steady group headed out, leaving the fast group to catch them later on the road. We made good time in the lighter winds, surprisingly good as 2 hours later we still hadn’t been caught. It wasn’t until the outskirts of Puerto del Carmen that we saw the fast group, delayed by broken spokes and lost brake pads. As they headed on we encountered our own mechanical: Tim’s Power2Max cranks had worked their way loose over the course of the ride and were beyond the scope of our meagre collection of tools to fix. 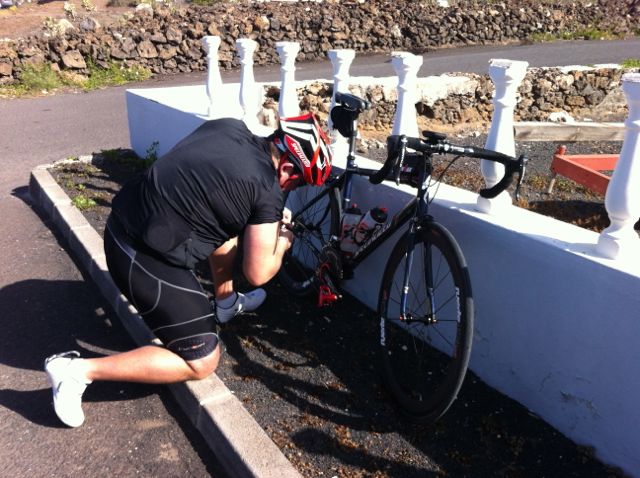 So we diverted down into Puerto del Carmen to find a bike shop to make Tim’s bike road worthy again. While the rest of us enjoyed a cafe stop Tim took his bike for a service; 20 minutes later we were back on the road and climbing out of Puerto del Carmen, the diversion seemed less pleasant on those hills. We worked our way around to Yaiza, but on route Tim’s cranks began to loosen again, there was no choice: he had to return home directly. Not an easy option by any means, taking the LZ-30 through La Geria and over to San Bartolomé.

Then there were four: Steve, David, Gill and myself were all that remained of the steady group. We refuelled in Yaiza on Magnum ice creams before heading further south to tackle the El Golfo loop. It was around now I started to notice the signs of fatigue – in myself as much as the group – by the time we’d finished the loop I insisted on a second ice cream break before taking on Fire Mountain. Eighty kilometres done, there was a strong buy-in to my Magnum based nutrition strategy. 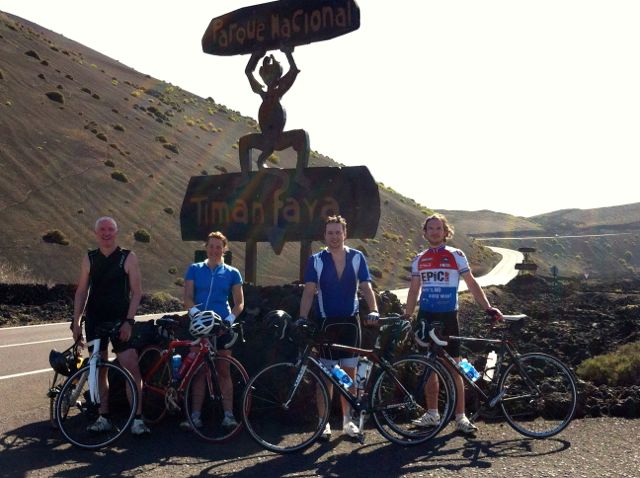 In light winds like today Fire Mountain is a pleasant climb. Steve tore off up the road chasing a German rider while the rest of us continued at a more considered pace. He just caught him at the top. Of course, we regrouped for the obligatory Timanfaya photo opportunity before heading back to Costa Teguise with Toby, our new German friend. We had gone far enough – Famara would be a town too far and I needed my group alive for Friday’s Time Trial. Without further ice cream the pace slowed.

Then there were three: with effort flagging I sent the group’s Duracell bunny, Steve, on with Toby to guide him home, while I led David and Gill the rest of the way. Helped by a quick stop for some sugar and caffeine we made slow, but sure progress to San Bartolomé, Tahiche and then down to Costa Teguise arriving at the hotel over 7 hours after we had left that morning. Any enthusiasm for a brick run had dissipated and I was happy to let that one go.

Dinner was the most subdued yet. Slow and vacant could easily describe everyone on camp now. I reminded them that all they needed to do now was a time trial up Tabayesco, a 90 minute swim set and a guess your time 5.4K on the same loop as the start of the week. Not much. And I was generous enough to allow them a lie-in with a bike start at 9:30 tomorrow morning. They’ll even be a coffee stop at the end of the time trial. I am getting soft.